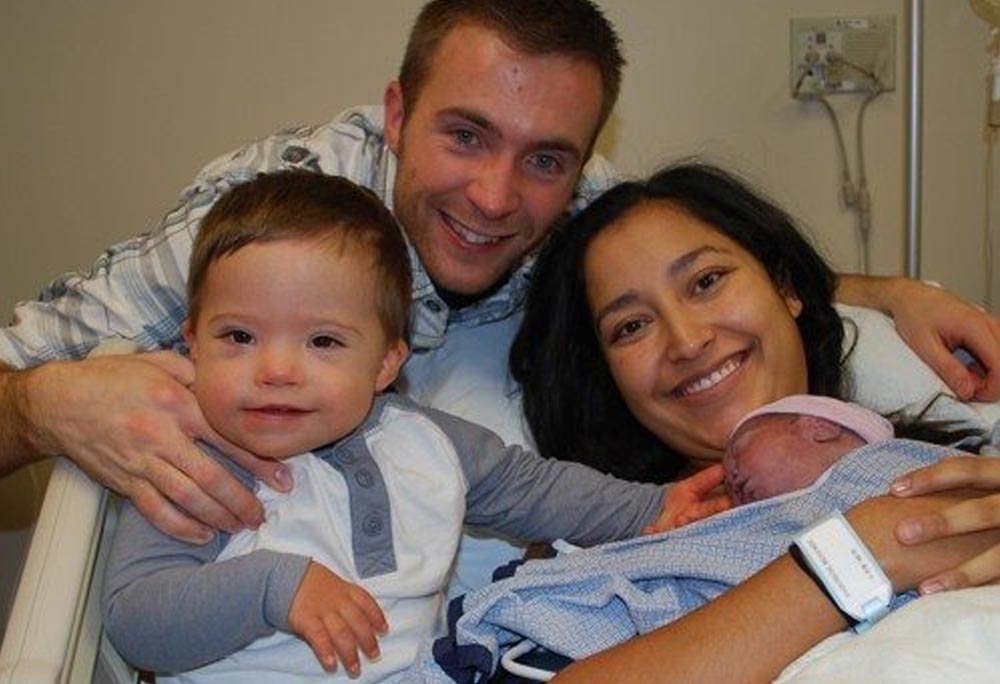 McKenzie anxiously anticipated the birth of her second child.  She hoped this child could serve as a buddy for her first child, Trevor, who has Down syndrome. Unfortunately, she found out that Maely had several abnormalities and would die before, during or after birth.  Her story is touching as she explained her decision to carry Maely to term.

Carrying to Term Despite Fatal Diagnosis

Everything seemed to be okay

When their first child was born with Down syndrome they were shocked!  McKenzie was young and didn’t feel the need to do any prenatal testing.  In hopes of helping Trevor with his development, McKenzie and her husband wanted to have another child to help motivate him.

During this pregnancy, they decided to do cell-free DNA testing to be more prepared.  McKenzie said, “..everything came back okay, showing no genetic issues, no Down syndrome, no Turner syndrome, or any of those other things, so we were feeling great.”

At the 20-week ultrasound McKenzie recalls the sonographer having a hard time with the images.  There wasn’t a lot of amniotic fluid and Maely was measuring small. Convinced they had the due date wrong, they told her to come back in a few weeks to allow the baby to grow.

They weren’t worried at all, they had the great results of the cell-free DNA test.  Their doctor called them the next day and said, “I’m not too stressed, but I want you to go to a specialist at maternal fetal medicine, just to make sure everything really is okay.  They look at babies all day and have a little bit more training than our technicians do.”

The ‘quick’ appointment turned into a horrible 2 hour experience.  Not thinking anything was wrong, McKenzie went to that appointment alone.  The sonographers found several birth defects. “At the time I didn’t understand a lot of what they were saying to me.  I didn’t understand the vocabulary, but there were about 10 things on the list that were problems and three of them were fatal.” McKenzie said

McKenzie explained some of the issues that they found during her ultrasound at maternal fetal medicine.  She said, “She had diaphragmatic hernia, so her diaphragm didn’t form all of the way, and it left a space..for her liver to kind of float up into her chest cavity.  Her liver was pushing her heart over, so her heart was out of place. She only had one kidney, she also had a cystic hygroma on the back of her head and neck area.”

She continued, “All of those things by themselves are not good news, and all together they were really, really horrible news.”  The doctors first thought it was caused by a genetic issue, however, McKenzie had a cell-free DNA test that revealed no genetic issues.  This stumped the doctors and led them to pursue further testing.

All of the prenatal tests come back normal

McKenzie was asked to have an amniocentesis done to get a more in-depth look at what was going on with Maely. To their frustration, the results showed no chromosomal issues.  “..having a name to the diagnosis would have helped so much. We were just left with all of these abnormalities that they told us would either cause Maely to be stillborn or die very shortly after birth.” McKenzie said.

That is when the doctors presented the idea of abortion.  They said there was no viability for life and didn’t think it was a good idea for McKenzie emotionally or physically to carry her. Despite that, McKenzie said, “I wanted to carry her for as long as possible..I am so glad I stuck with her as long as I could.”

Deciding not to abort

McKenzie attributes her decision to not aborting to her religious and personal moral and values.  She said, “I just know that life is sacred, and it’s not something that we get to decide to end..it was having the faith and hoping that she was just okay and that she wasn’t suffering, that as long as her heart was beating, she was all right.”

Living for and hour and six minutes

Due to the increased stress on Maely, McKenzie decided to have a C-section.  McKenzie recalled the moment she was born saying, “Like I said she was born alive, my husband was with me, and the hospital was so nice and extremely accommodating because of our situation.”

They let her sister in the OR, something that normally isn’t allowed.  Her sister, a labor and delivery nurse, was there to take pictures and video of Maely’s birth. Something McKenzie and her husband now cherish.

After she was born, McKenzie, her husband, and Trevor got to spend Maely’s life with her.  McKenzie said, “Getting that time as a family of four was so precious, and we are so grateful that we had it..after she passed away, we went back to my postpartum room, and that’s when my husband’s parents and my mom got to hold her.”

Maely lived for an hour and six minutes, something that McKenzie said was absolutely worth it.  She said, “You personally will be tested, your marriage will be tested..but just keep in mind what your end goal is..I think it’s all worth it.”