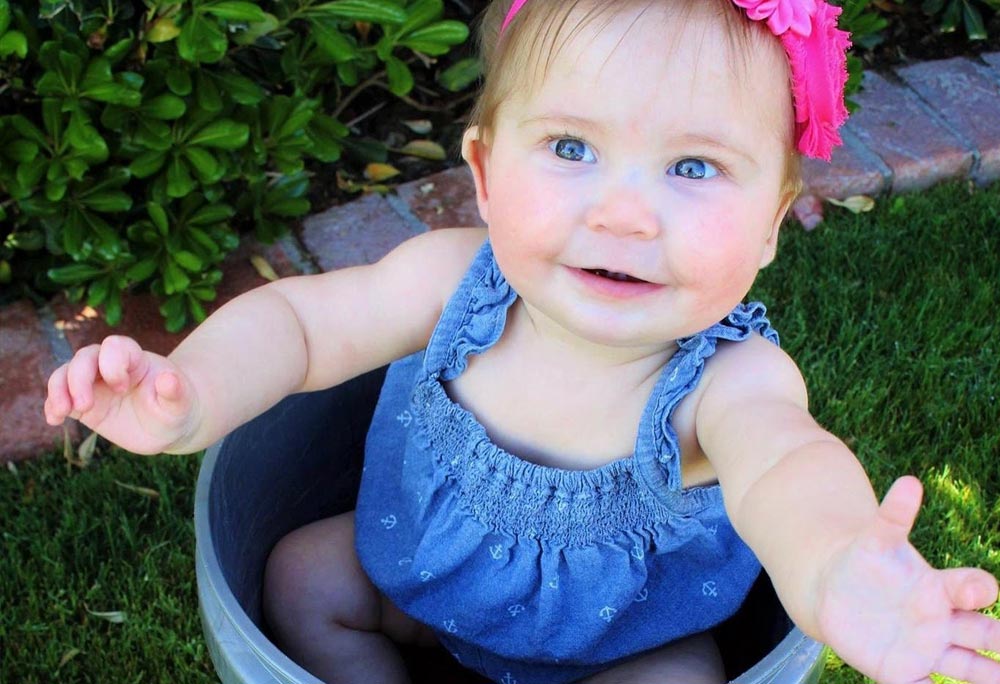 At their 20-week ultrasound, Jenna and Dan were thrilled to learn that their baby was a girl! It wasn’t until Jenna went back to work that she received a phone call from her OB.  He told her that he found micronancia on the ultrasound. Basically this meant that her baby had a small chin.

Jenna said she made a mistake following the phone call.  “Of course I do the worst thing and Googled micronancia and basically saw worst case scenario pictures of babies with no chins.  I got pretty scared.”

Parents are familiar with diagnosis

Jenna and Dan’s doctors were on the lookout for indicators that something might be wrong with Ava because of Dan’s history. Dan was born with Pierre Robin sequence or PRS.  Their doctor’s knew to look for a small chin and once they found it, they knew that Ava would too be born with PRS.

After learning that Ava would have PRS, Jenna decided to research PRS to get a better understanding of what the diagnosis would entail.  It was then she said she was able to come to terms with it.

When an individual has PRS, there are many things that are affected.  Jenna explained, “Pierre Robin sequence includes a recessed chin, a recessed tongue, and a cleft palate, and all of those things together can lead to both breathing and feeding difficulties.”

Depending on the severity of how they are affected, some babies require a tracheostomy.  Others need a jaw distraction to move to jaw forward to help with eating and breathing issues.

Giving birth to a child with PRS

When Dan was born he was blue and wasn’t able to breath on his own.  Knowing this prepared Jenna that there could potentially be issues. To their surprise, Ava came out crying!  She stayed the night in the NICU to monitor her breathing. It was discovered that she had a cleft palate and did better if she slept on her side so her breathing wasn’t obstructed.

A few weeks later, they learned what implications of having breathing issues would be.  Jenna said, “Quite frequently she couldn’t lay on her back..we had to constantly reposition her because the tongue kept obstructing the airway.”

To help her grow, Jenna and Dan made the difficult decision to do a lip adhesion surgery.  Jenna explained, “..they sew the bottom of the tongue inside the lower lip to hold the tongue forwards so it can’t obstruct the airway.”

Having PRS, has required Ava to undergo several surgeries.  When Ava was nine months old, they had the lip adhesion removed.  In the coming months, they are going to repair her cleft palate as well.

Dan helped also share somethings that he had to deal with that Ava might be facing as well.  He said, “..because of the smaller lower jaw, there are often dental implications as they grow up..the other thing may also be necessary is speech therapy.  I had speech therapy when I was growing up, and we may likely need some as well.”

Other than that, Ava is described by Jenna as, “a wonderfully smart social little nugget.”  She is only about a month behind in her physical abilities due to her surgeries and her breathing difficulties.

Being in a unique situation, Dan shared his advice as a parent and as someone with the condition as well.  He said, “Be as supportive as a spouse as you can. It’s going to hit you at weird times how hard it is, and you are both the support system of each other”

Knowing some of his challenges were difficult, he fears Ava will experience something similar.  He said, “I don’t want her to go through what I went through. I just want something easier, something better for her.”

Jenna added to keep a medical binder to help keep the medical team all on the same page.  “There are a ton of different doctors. Between specialists, GI, and plastic surgeons, you’re seeing a whole team of people, and if you are not her advocate and keeping everything straight, who is going to do it?”  She also emphasized to reach out to communities to help connect you with people in a similar situation.