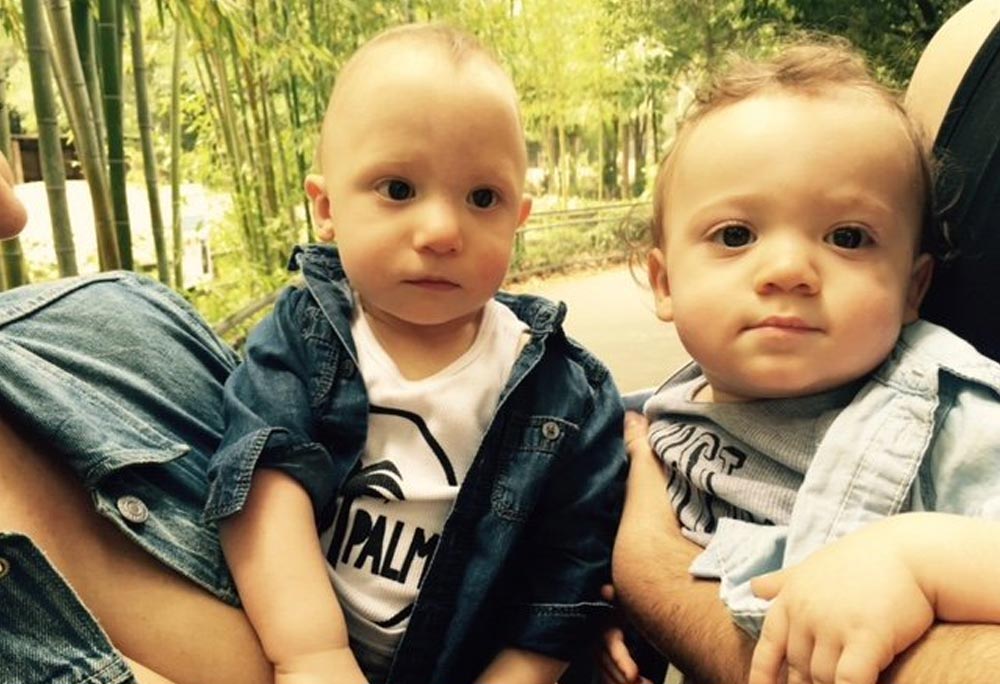 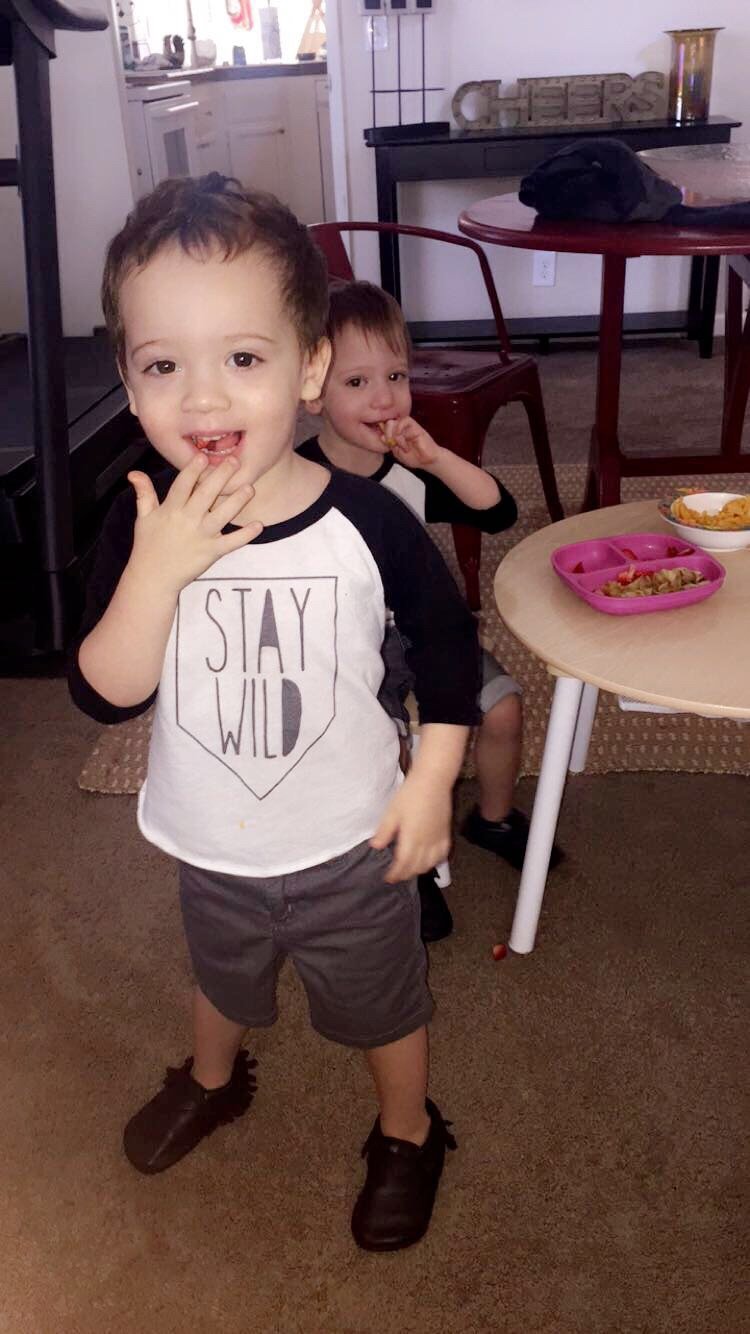 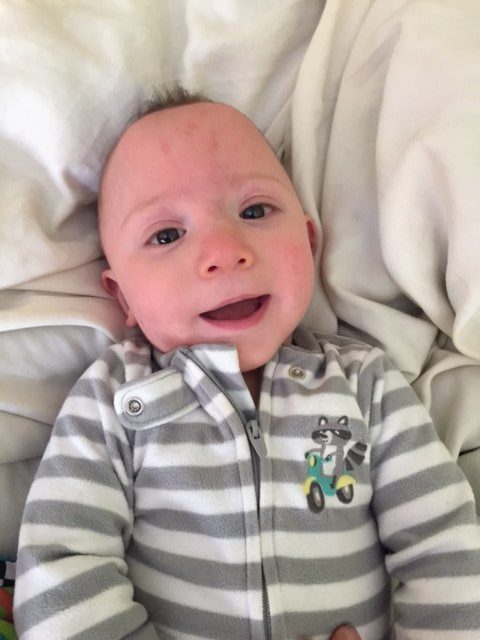 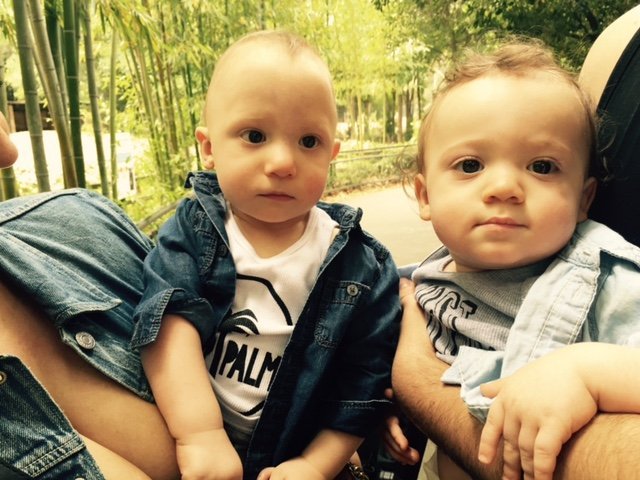 After learning their son had some markers for a genetic condition in utero, Bijan and Zach were offered to abort one of their twin boys.  They declined the offer and also declined in utero testing. Jackson was diagnosed with 22q11.2 deletion or DiGeorge syndrome.  Three years later, their other son Walker was recently diagnosed with autism.

During her pregnancy, Bijan said, “I was having many complications.”  She explained that Jackson’s fluid was really high and that his umbilical cord wasn’t attached properly.  They were given two options; be put on bedrest and expect a very early delivery, or terminate baby B, Jackson, and continue the pregnancy with baby A.

“We both declined immediately, and they were born at 31-weeks gestation.  40 weeks is full-term, 37 for twins.” Bijan said. They also made the decision to decline any in utero testing.

When the twins were born, Jackson weighed one pound 14 ounces.  He ended up staying in the hospital for 90 days. Bijan said, “He has an underactive thyroid, but they didn’t figure out his thyroid condition for a while.  He was very listless, wasn’t eating properly and wasn’t gaining weight..they kept saying they knew it was a genetic condition but they didn’t know which one.”

They were visited by a couple of different geneticists who came by to try and figure out what Jackson had.  They ran a full-scale genetic test on him and were able to receive a diagnosis.

When he was three-months-old, Jackson was diagnosed with 22q11.2 deletion or DiGeorge syndrome.  Meaning that he is missing a small part on his 22nd chromosome. The medical problems associated with this syndrome are: heart defects, poor immune system, cleft palate, difficulties in feeding and gaining weight, and delayed developmental milestones.

Jackson was lucky and escaped any heart related conditions. However, he has had several hospital stays due to surgeries and tests that have been run.

“I think for a lot of people, you can’t really believe it at first.  You just expect everything to go perfectly like every parent would. The first day was just denial, I guess..but as the days went on, I grew a little more confident with trust and faith in the whole situation, and I knew it was going to be okay.” Zach shared.

Trying to stay positive and being a good support is something that Zach says has been challenging.  He said, “So you just want to be there for him, help him develop and try to be a good dad.” Bijan shared that for her, the challenges have come in watching him go through hard things as an infant.  She said, “In the beginning, it seemed like the cards were going to be stacked against him, and I think that was tough.”

Finding happiness in his success

Bijan shared that her biggest joy is seeing how far Jackson has come.  She shared, “He still isn’t the typical three year old, but our joys come from his successes and everything that he does do now..he does have such a great personality, and he’s such a great kid.  He’s happy 99.8% of the time, so he’s our whole family’s joy.”

Something Zach has found joy in is seeing Jackson smile and hearing him giggle.  He said, “You don’t know what’s going to happen, you never know. Just seeing him smile and looking you in the eye the first time was the biggest joy..I think the biggest joy thus far is his personality and his sense of humor.  That has been greater than I could ever really dreamed of, so we both have a lot to look forward to.”

Other son diagnosed with autism

Walker, Jackson’s brother, was recently diagnosed with autism.  Upon finding out that diagnosis Zach said, “It was a long stretch of almost three years.  I wasn’t really surprised, I couldn’t really be surprised at that point. All I could really think was, ‘Here we go, let’s just do it.’  We are already there for the boys, so all we can do is just do as much as we can and try to keep them happy.”

Bijan however, had a different reaction.  She said, “I felt like I had been hit with a MAC truck after everything.  That’s the truth, I just didn’t see it coming. But like he said, this is our life, and these are our boys and they are perfect to us.”

Take care of yourself

Looking back at the best thing she did for himself and her family, Bijan said, “Take care of yourself as parents..I was so young when I got pregnant, everything just felt like it was constantly coming at me and I was very overwhelmed.  One day I just looked up a therapist, and I went and had a session, and I went for a year. It was the best thing that I ever did for me and my children.”

Later she added, “Don’t live in the future.  You cannot control the future, so there is no point.  Enjoy your baby, and love him or her for who they are.”

Zach’s advice was simple, “I just just tell you to hang in there, and sometimes having a label is the worst way to look at it.”