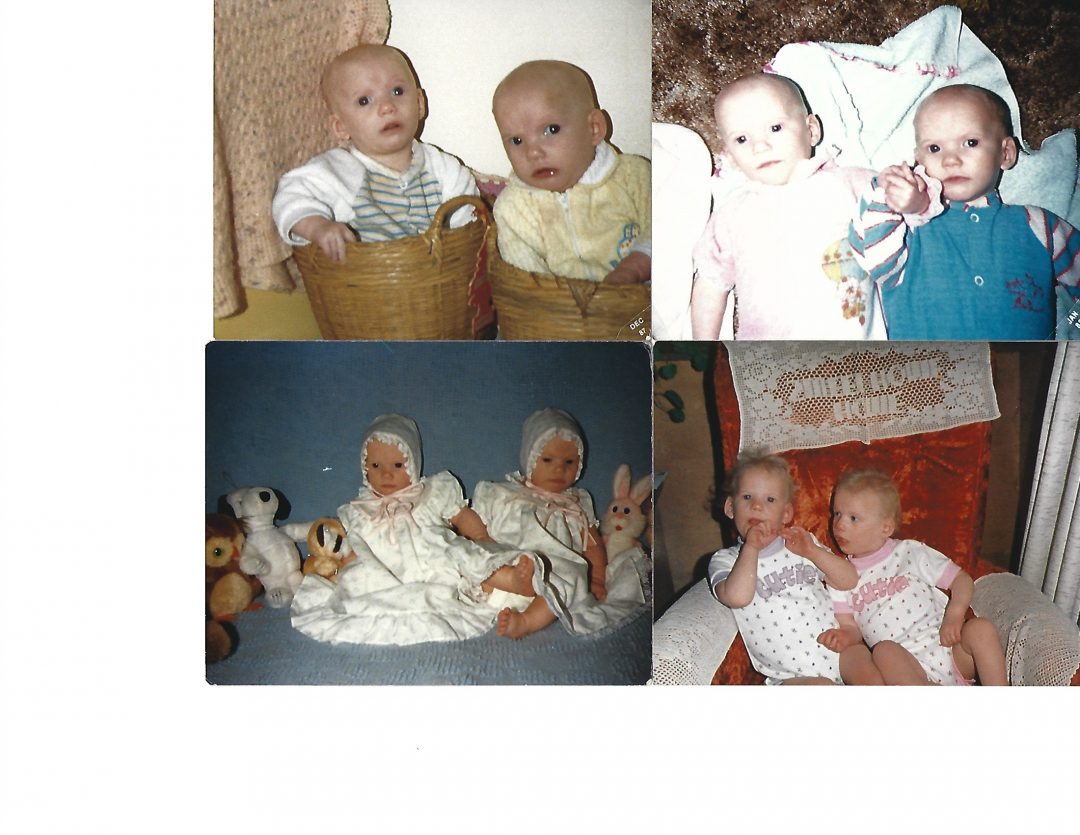 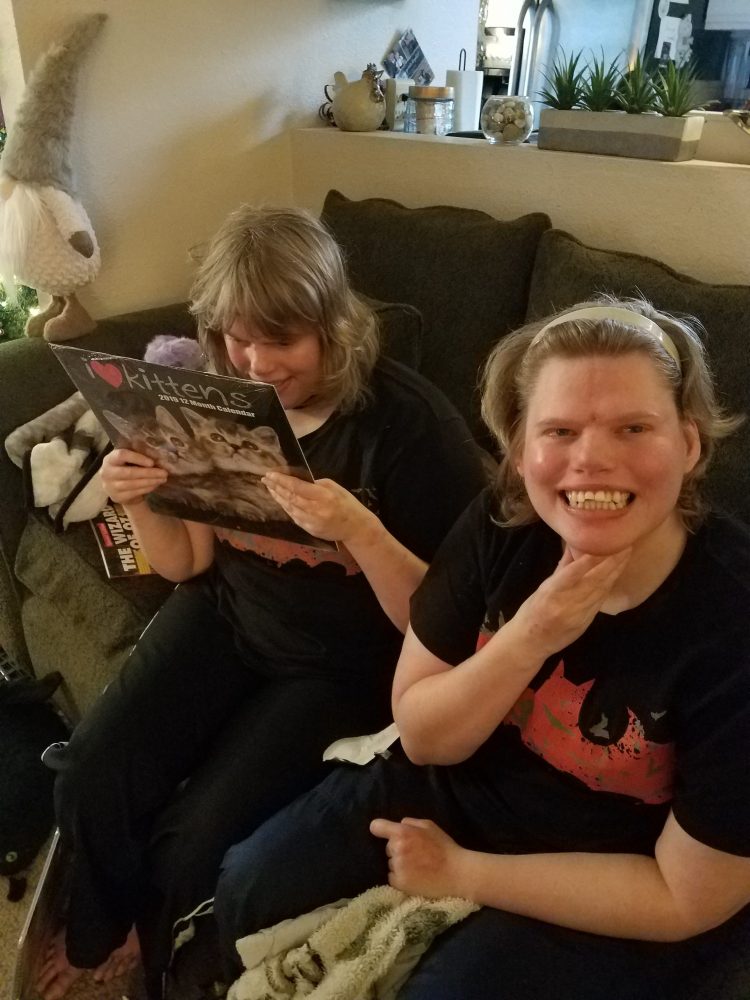 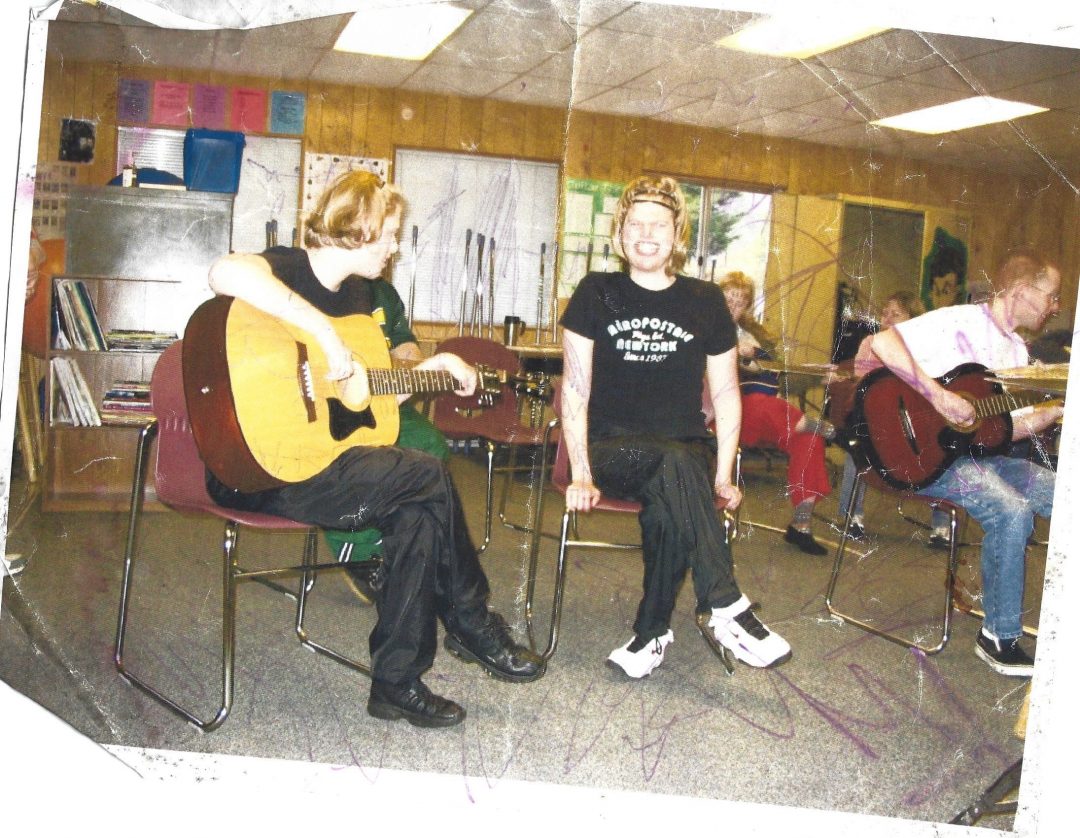 Stacy and Terry are the parents of twin girls, Sydney and Logan, both have cru di chat.  Shocked about the diagnosis, Stacy and Terry were honest about their greiving process and how they accepted their diagnosis.  They love their daughters and wouldn’t have them any other way!

Parents Didn’t Know They were Having Twins

Terry and Stacy never had an ultrasound, and were surprised to learn that they were having twins girls! They were expecting one 8-pound baby, but when Sydney was born weighing only 3 pounds the midwife put the heart monitor back on Stacy and discovered another baby. Out came 5-pound Logan, so it was 8 pounds but split between two babies.

The twin were about a year old when their family doctor sent them to specialists for testing because the babies were behind developmentally, and their heads were measuring small. Stacy thought some of the delays were the result of her daughters being born 3 weeks early, so she wasn’t concerned about the delays.

The specialists found the girls had cru di chat syndrome, which shocked both parents. Stacy said, “I remember looking at them and thinking there can’t be anything wrong with them.”

Working Through a New Diagnosis: Grief to Acceptance

Both Terry and Stacy said finding out about the diagnosis was like the death of a dream. “We were just in shock. We had made all these plans for them and their lives. I can only relate it to something similar to death,” Stacy said. “We just didn’t know the future and all we knew was that mental retardation was not quite the thing you’d want for your children.”

They were worried about whether their daughters would have a hard time in life or if other people would make fun of them. Terry said it took him longer to accept than Stacy. “I remember her telling me, ‘look they are still Sydney and Logan, they haven’t changed. It’s just how we are looking at them that’s changed.’ I’ve never forgotten that.”

The girls went to school until the age of 21 and now live at home with their parents. Stacy was worried about how other children would treat her daughters while they were in school, afraid they would be mistreated. Her fears were not realized. “You find it’s really good for the kids and the school for those students to be in there, to be around them…The outcome for the students is to be more considerate and sincere.”

Sydney and Logan participate in programs through RISE, a non-profit for individuals with disabilities, they go on community outings with other friends with RISE.

The girls like everything a non-delayed child would like. They do errands, Sydney watches TV, and Logan plays on the computer. Sydney loves bubble baths. They like going to the park, being with their friends and they especially like watching Special Olympic games.

“Sydney and Logan have a disability that is visible. I think we all have our disabilities, but they don’t show,” Stacy said.

The Impact of Sydney and Logan’s Disability on Their Siblings

Terry and Stacy have two other daughters, Bree and Trevy. Currently Bree is another guardian of her sisters in case something happens to their parents. Bree is described as a “mama hen and very protective of them.” When Trevy was very little she had a hard time understanding why she had to live with her sisters. “But now, she loves them just as much” as her sister Bree. Terry said both siblings, Bree and Trevy are more compassionate because their life with Logan and Sydney.

Bree has a 9-year-old son who loves his aunts. One time, Terry was said, he was worried someone might be mean to his daughters. His grandson looked at him like, “But Poppy, why would they be mean to them?” Terry said that his Logan and Sydney have taught everyone in the family to be compassionate.

Stacy said that her daughters have been a blessing from the beginning but that she had to adjust her thinking to a different path than what she had expected. Now they are just “Sydney and Logan. Stacy tells us, “They are actually easier to raise than my other two daughters who are non-delayed.”

Stacy said, if she was to change anything it would be to have spent a little more time with her other two daughters. Sometimes she misses having freedom to come and go as she would like, and Terry said some of the challenges have been less personal time with his wife and with other people. They also need to be careful with crowds because of potential meltdowns from Sydney and Logan.

Despite the challenges they know it’s worth it. “Everyone has problems, you just have to adjust…They are worth it. I wouldn’t give up anything. I love coming home.” said Terry. He loves that his twin daughters still live at home and he gets about 20 hugs a day from them.