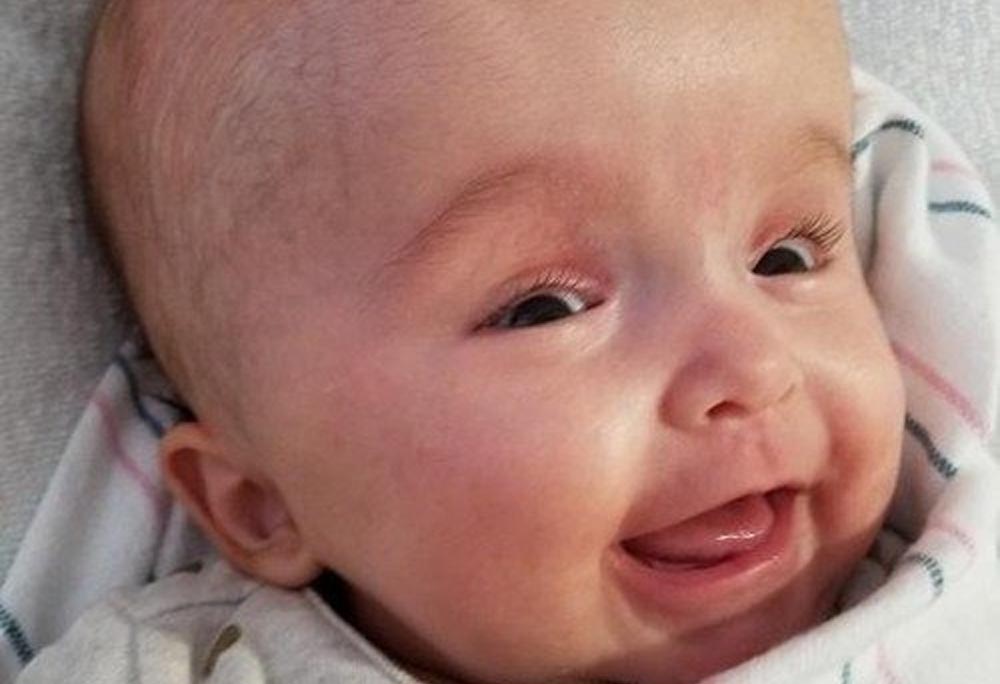 Sarah learned that one of the identical twins she was carrying had hydrocephalus during a routine ultrasound.  After Isabella was born, it was discovered that she had several other issues. Isabella has endured many surgeries and will have several more.  Despite that, she brings a calming presence to her home.

The Little Girl with Something Special

One of the twins has hydrocephalus

Sarah explained the first time she learned that one of her identical twin girls was going to be born different.  She said, “We found out that she was starting to develop the hydrocephalus around 16 weeks, and from there, we would get a scan about every two weeks..and they knew she definitely had it.”

During these scans the doctor would measure the ventricles inside her brain.  This is how they were able to determine that she would be born with hydrocephalus.

Termination was thankfully not an option

The doctor told Sarah that if she were having just one baby, she would have recommended termination.  However, Sarah would not have chosen termination regardless if Isabella had been a singleton pregnancy.

Sarah said, “From then on, no one really pushed termination as much because we were having identical twins.  I was like, ‘Well, one’s doing good, and we already know that the other one has this. So let’s just continue on and see at birth what happens.’”

Challenges raising a child with hydrocephalus

As soon as Isabella was born, doctors discovered that she has some other physical abnormalities.  Sarah said, “She was born with a perforated anus, so she doesn’t have an anus, and she also has a persistent cloaca where her vagina and urethra are connected inside.  So she only has one exit, and that is where she urinates.”

Due to these other physical abnormalities, Isabella has had several surgeries to correct them.  Her first surgery was to place an ostomy bag, this is a bag that collects stool on the outside of the body.  Learning how to properly place the bag and maintain her skin around the ostomy bag has been a learning curve.

Another surgery she had when she was only a few days old was brain surgery.  Sarah recalls, “The neurosurgeon made a new path, a new hold for it (spinal fluid) to flow and regulate..if that hole he made closes up, she will have to go in and get a shunt.”

When Isabella is around six months old, they are planning a reconstructive surgery on her anus, vagina and urethra.  This will eliminate the need for an ostomy bag and correct the place where she urinates from.

In addition to hydrocephalus and her physical abnormalities Isabella was diagnosed with Charcot-Marie-Tooth syndrome.  Sarah explained it as, “nothing to do with her teeth..it is a neurological disorder where her lower limb muscles, basically from her knee down, will deteriorate over time, and she will become weaker in her hands as well.”

How much her muscles deteriorate is something they have to wait and see.  Sarah said that it can affect her mildly or greatly. They don’t predict she will need a wheelchair, but she may need leg braces as she gets older.

Isabella also has a microduplication on chromosome 16 short arm which isn’t associated with a syndrome or disorder.  It is linked to learning disorders, speech delay, ADHD, autism and schizophrenia. Something else they have to wait and see how she is affected.

Calm and peaceful is who she is

“She hardly cries, and she’s the sweetest baby ever..There’s something special about her.  We can’t put our finger on it. My mother-in-law, my mom, my husband and I just see this peaceful sweetest baby we’ve ever seen..Isabella just had this aura about her where she’s just just at peace with life.” Sarah said.

In comparison, Ariella, Isabella’s twin, Sarah said, “..her sister’s spunky and more on the fussier side.”  Her five-year-old son once told Sarah, “Mom you drank too much water, that’s why she has too much water in her head.”

“First, I would not say termination at all.  With technology nowadays, they have the ability to help with surgery depending on what type of hydrocephalus has developed.  I would say some things to expect are NICU time or your child is going to have surgeries right off the bat, which is hard to deal with because they are so tiny.” Sarah said.

She also added to, “Keep pressing on, pray, get early intervention.  Go in as soon as possible for physical therapy so you can have that going for them to make up for their head being so large and heavy.”