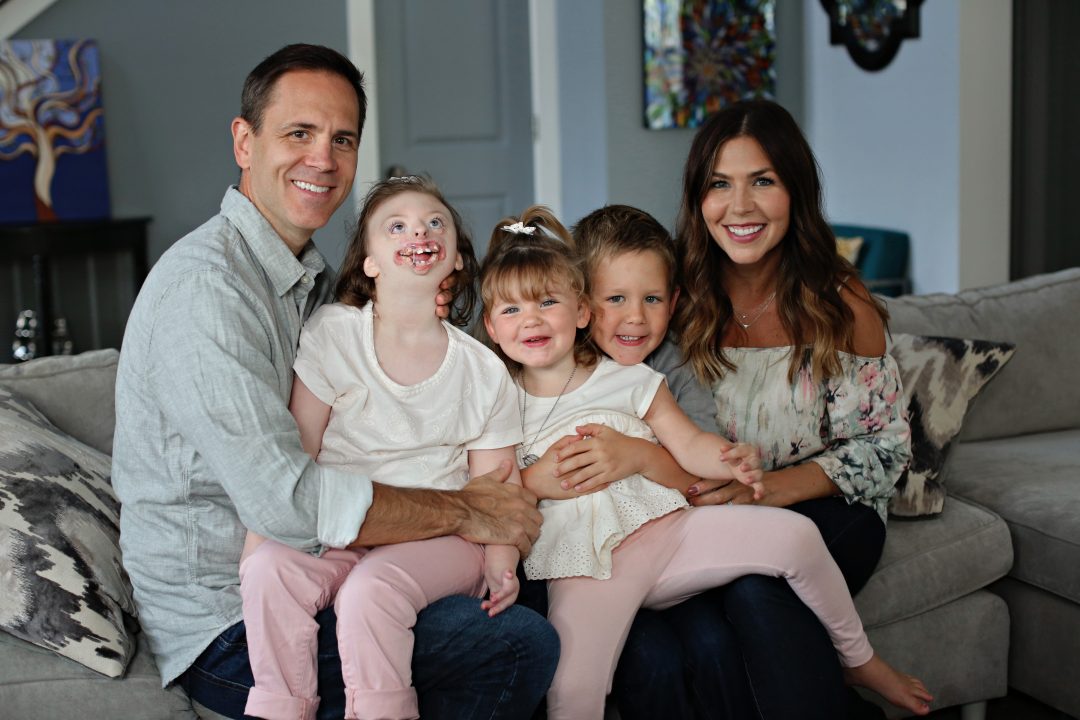 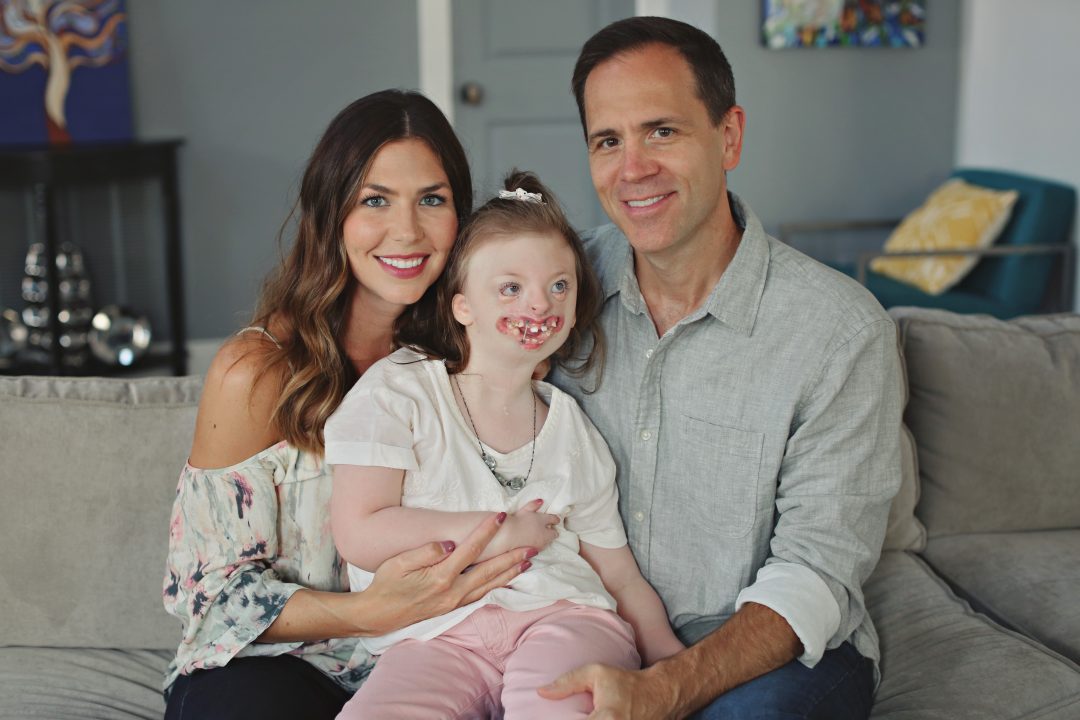 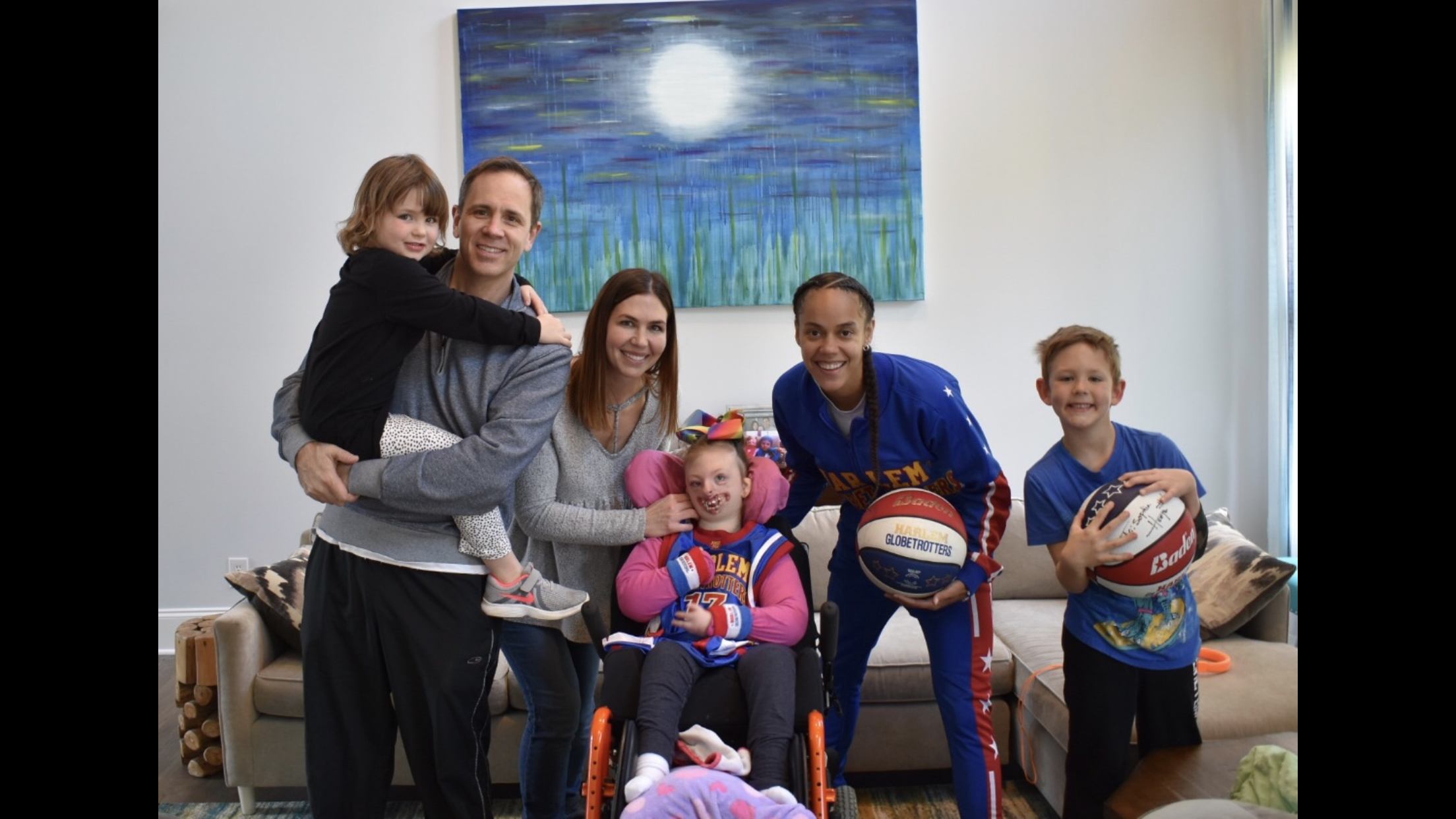 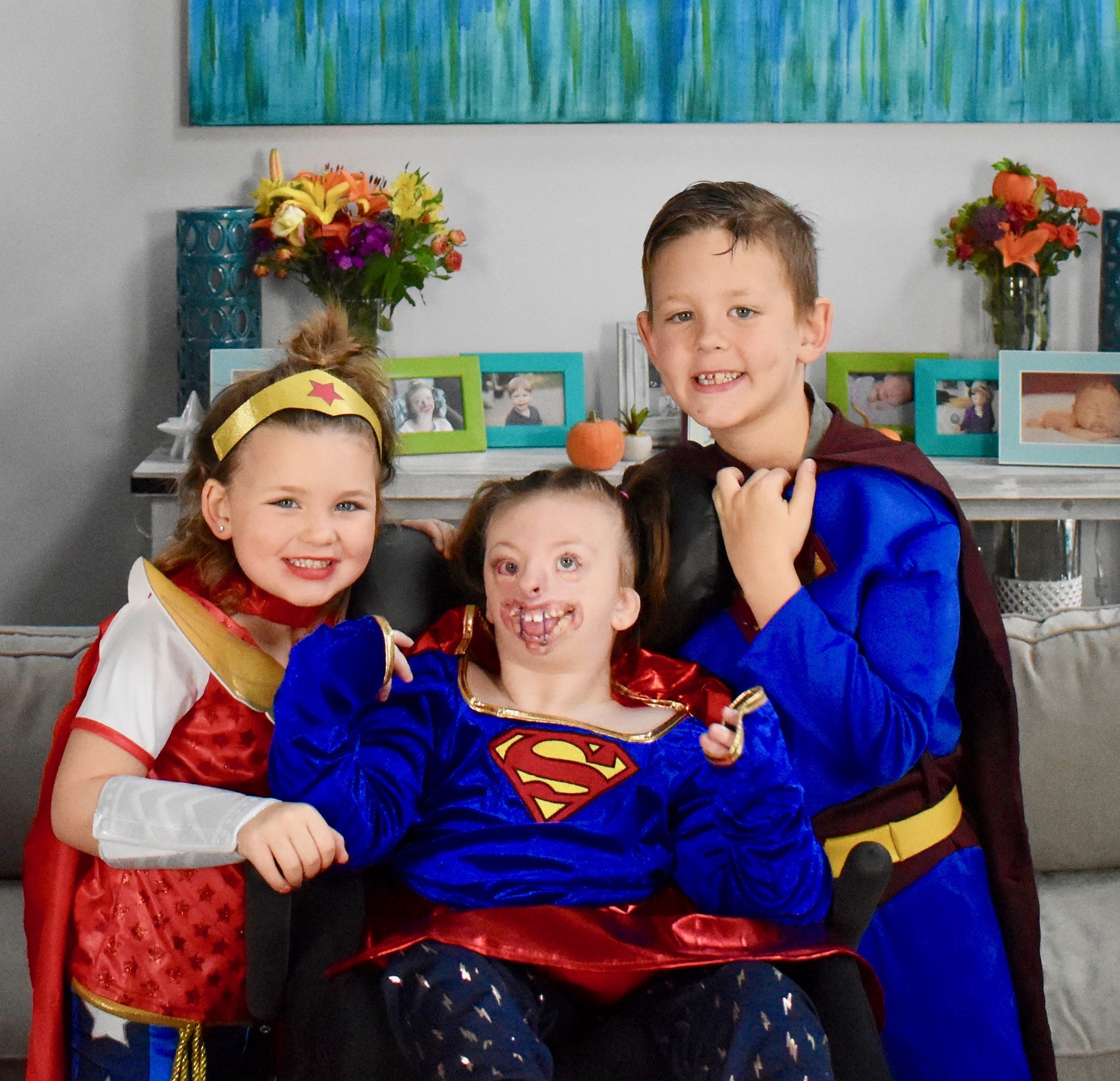 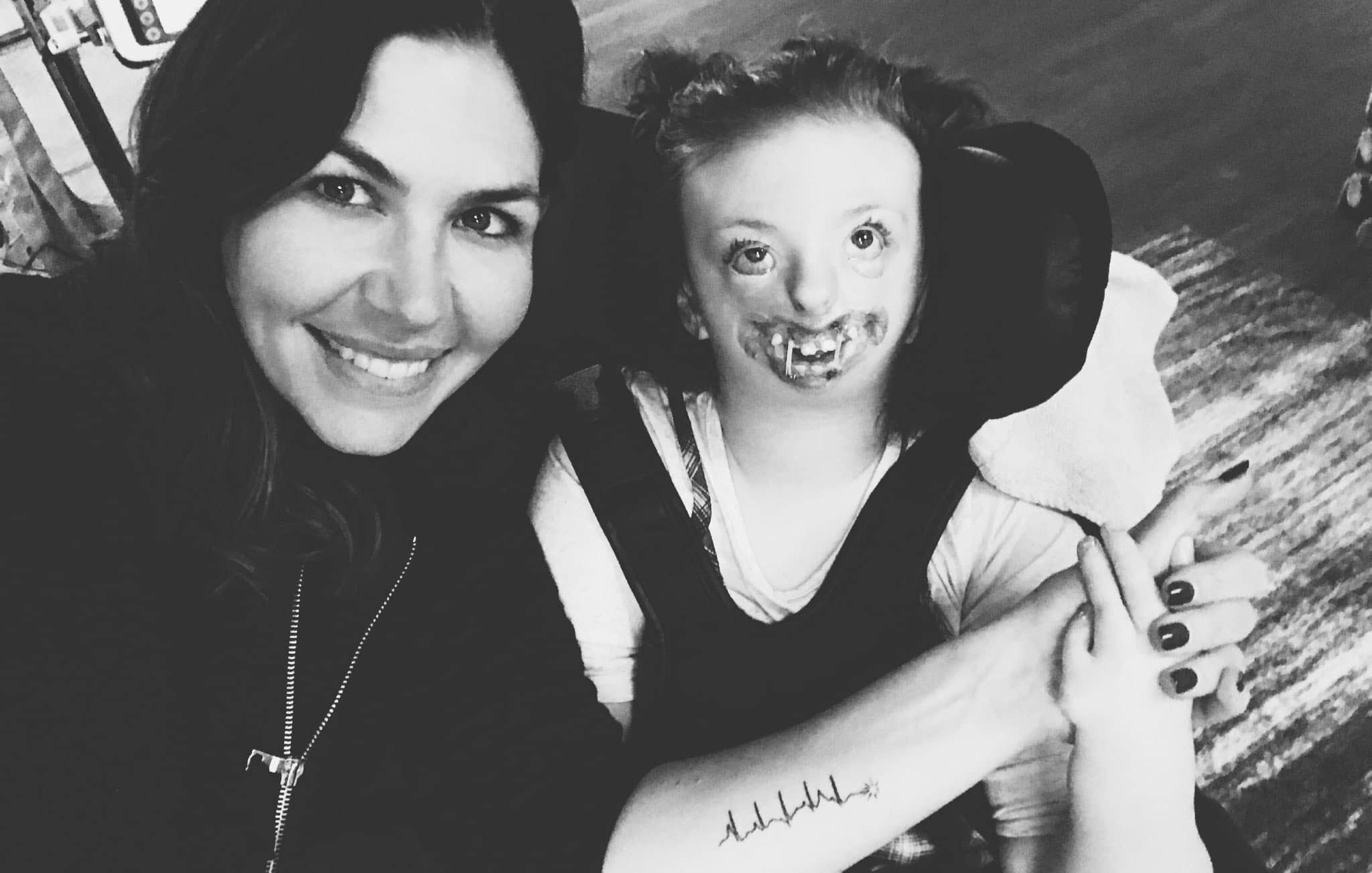 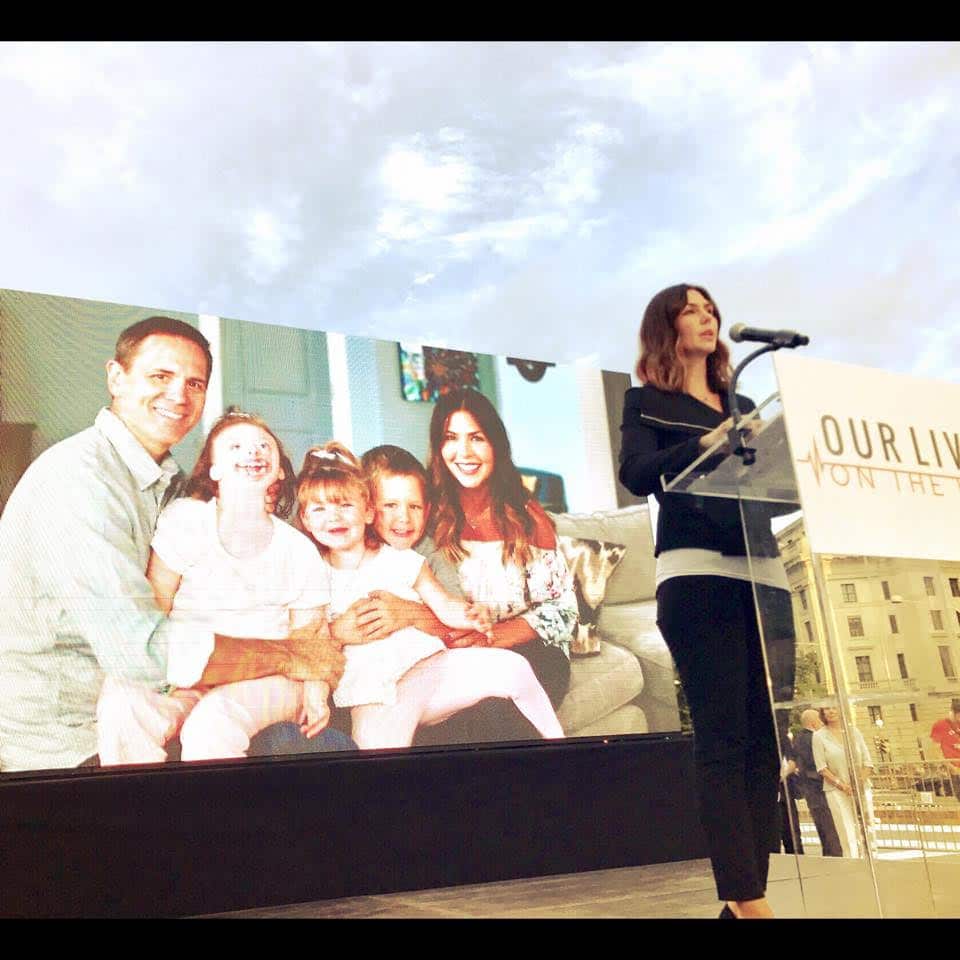 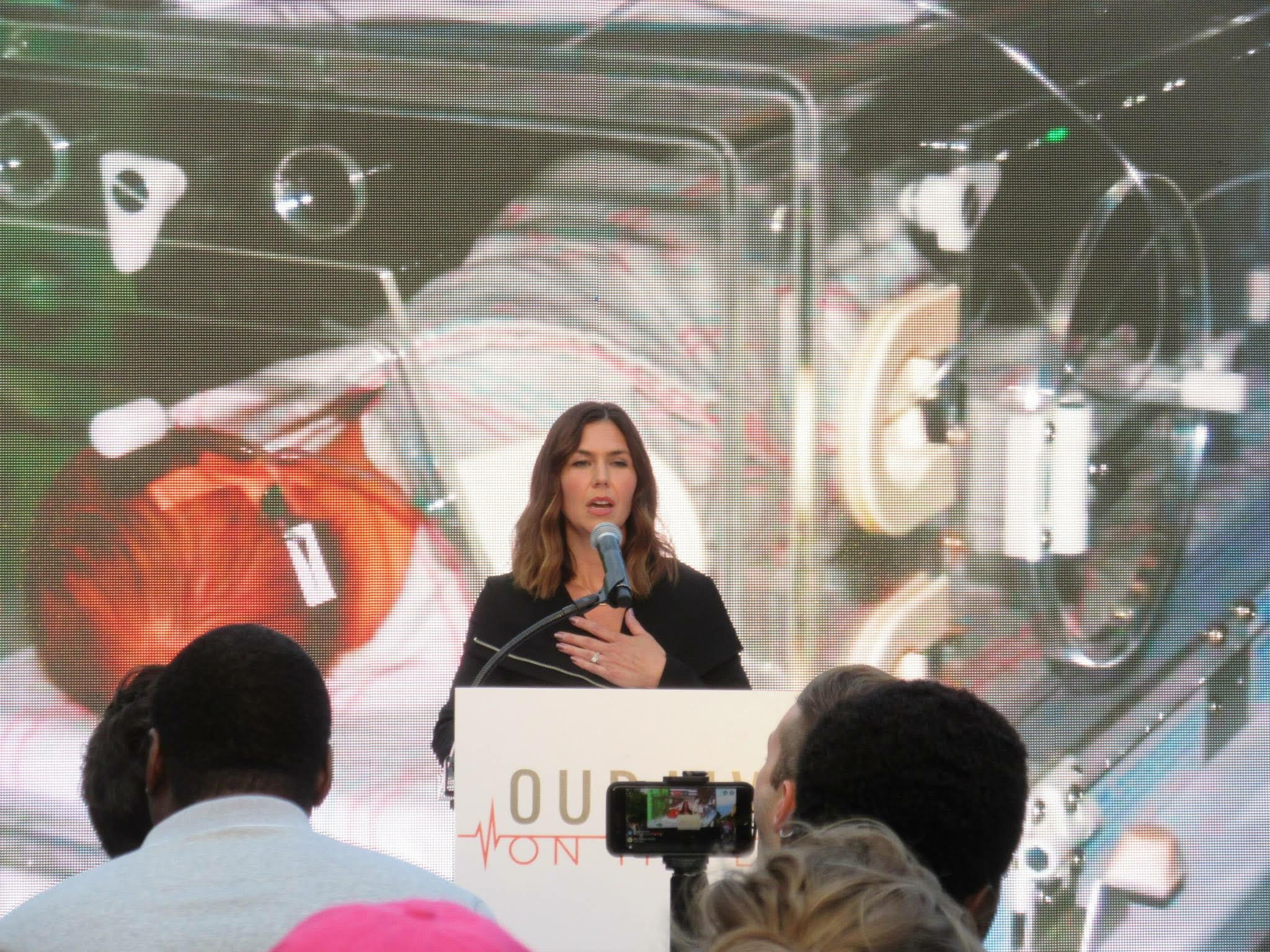 Natalie found out during an ultrasound  that her daughter would be born with multiple disabilities. She was shocked and only had 4 weeks to prepare for the birth.  She has since become a fierce advocate for Sophia and is proving that a disability is nothing to be ashamed of.

Don’t Mess with This Momma

“During the ultrasound, I was in shock,” said Natalie. “I thought ‘there is no way I’m strong enough to handle this. I can’t do this. I felt trapped and afraid’.” The ultrasound was done four weeks before her daughter’s birth, and Natalie decided she wanted to get through those four weeks with as little stress as possible so it wouldn’t harm her baby. “So I decided to hold onto hope that everything was going to be okay, and that’s what got me through, but I was scared.”

Baby was Born with More Issues than Anticipated

After Sophia was born, a team of specialists were working with her. Natalie didn’t know what was happening with her baby or if she was okay. “They finally laid her on my chest, and she blinked and was staring right into my eyes, and I was still in shock because I hadn’t seen another human being who looked like her,” Natalie said. Natalie only had a few minutes with Sophia before the hospital staff took her away.

Later that night, Natalie went to see Sophia. She was afraid to see her baby and the realities that Sophia brought, so she had avoided going to the NICU. “I was afraid of this new life that I didn’t know anything about, and it meant facing it the moment I went to see her,” said Natalie. When she reached the NICU she heard the nurse baby talking to Sophia. This was a turning point for Natalie. “I just broke down crying because in that moment the shock faded and I realized this is my baby,” Natalie said. “I held her, and I cried, and the nurse held me and from that moment on I said, ‘I don’t care about anything else other than protecting her and doing whatever it takes to keep her happy and safe and loved.”

Having a Child with Several Complex Diagnoses

“We thought the only issue Sophia was going to have was the deformities and the challenges that come with that,” said Natalie. “She was developing typically for everything she went through, and those skills began to regress.” Sophia was five years old when she was diagnosed with Rett syndrome. With Rett syndrome, children develop normally until around age one when they begin to regress. They eventually lose the ability to walk, talk and do self-care.

Sophia was also diagnosed with an immune deficiency that only six people in the world are known to have. She developed seizures which is part of the Rett syndrome, and she also has Type 1 diabetes. “Rett syndrome really is the biggest challenge because it basically traps you inside your body. She has a lot of neurological storms, and to me that means seizures and tremors. Her brain won’t do what it wants to do,” said Natalie.

Sophia’s specific gene mutation, which caused the Rett syndrome, is one that has never before been documented. “She’s like no one else in this world and no one else has this combination of conditions and looks like her,” said Natalie. “Although, we found a girl in Siberia who is very similar.”

Accepting your Child for Who They Are

Natalie describes the mourning she and her husband went through. “That four weeks before she was born, I was definitely mourning. I felt it again at certain times after her birth like when you would see other children around her age doing things that she couldn’t do,” said Natalie. Natalie mourned the loss of Sophia’s voice and singing nursery songs. “Just little things that you appreciate so much more now that they are gone, that she was able to do them,” Natalie said.

Natalie described how she wanted to be a mom since she was a young girl and had never considered having a child with disabilities. “There was that feeling of loss but that feeling is gone and it’s replaced with full love and appreciation,” Natalie said. There is no mourning in her life with Sophia now. “There came a point where I accepted Sophia for who she is, disabilities, deformities and all,” she said. She said that Sophia is “amazing, she is true beauty, strength and I accept all of her. I love her, and I accept all of her disabilities and differences.”

Natalie’s husband, Mark, also went through a mourning period. “My husband is incredibly supportive, he is there for everything and for everyone and he really is my rock,” said Natalie. “He had the same mourning periods…and he has a different way of handling things than I do.” She stated that the challenges they have had with Sophia have brought them closer together.

Family Accepting their Loved one with a Disability

Natalie and Mark’s families took turns going to the NICU and loved Sophia right away.  “They were there every day visiting her, loving her and it’s still like that to this day,” said Natalie. Family members love to help care for Sophia and have played a vital role in Sophia’s life. “I couldn’t do it without them,” said Natalie. Her sister is becoming a nurse because of Sophia and has been a great help to them.

Sophia’s siblings have also developed a strong sense of compassion, empathy and acceptance because of Sophia. “They know what true beauty is, and I learned that later in life,” said Natalie.

Finding an Alternative Way to Communicate

Sophia is unable to speak but she can communicate her needs and wants. “There are times when things calm and she can focus, and she is able to move her arms and do things. She does have different ways to communicate with buttons and switches, and also she really communicates with her eyes,” said Natalie. “You don’t need that many words to be able to express yourself and communicate.”

Challenges in Raising a Child with Rett Syndrome and Facial Differences

“One of the greatest challenges is she does experience some struggles and pain at times, and she can’t tell me why,” said Natalie. “So, there are times when she is crying and all I can do is be with her and comfort her.” When Sophia is in pain, they have a routine they do to try to alleviate it. “It was really hard until I realized she just needs me there with her. I will comfort her and work with her through it,” said Natalie.

The biggest challenge they face is public reaction to her daughter’s facial differences. “We knew it would be a challenge, but we did not realize that it would be as bad as it was,” said Natalie. They have had people stare and make unkind remarks when seeing Sophia. One particular incident was really hard for them. Two teenage girls walked by them and after seeing Sophia they screamed, “as if they had seen a monster, and then they began to laugh…and that was the moment that kind of broke me,” said Natalie. “It was a pain that almost brought me to my knees.”

It was very difficult for them to go out into public. “Having to build up so much strength to go to the grocery store only to be knocked back down again was really difficult for me. I struggled with it and so I chose to remain pretty private,” said Natalie.

Advice to Other Parents who have a Child with Rett Syndrome

Natalie said, “you are stronger than you think.” Your love for your child will likely be stronger and more fierce than you could ever imagine,” she said. “You may be sad now, accept those emotions and allow yourself to feel them so that they can pass. You will accept and love your child just like any other child.”

“I have dealt with extreme sadness, but because of that I feel extreme, real, true happiness,” said Natalie. “She is so important to me and she has changed me for the better. I’m a better human because of her.” Natalie also advises living in the moment and enjoying the small things.

Natalie started advocating for health care for children with disabilities and she started receiving death threats and hate mail. “Someone used Sophia’s image to promote abortion and I decided enough was enough. I wanted to have it removed and Twitter, at first, found no violation and that really angered me,” Natalie said. “I have a great following and so I asked them to help me and we shared it, and I shared it, and I shared the story and it went viral throughout the world and, of course, Twitter took it down.”

Twitter didn’t have a place to report hate speech for people with disabilities. “You can report hate speech for race, religion, gender orientation, but not disability. So, if there’s not a proper place to report it then often times it’s not going to be a violation,” said Natalie.  “So, I just started a campaign to get Twitter to change that.” Natalie has a supportive community and together they were able to get Twitter to include disability in the reporting tool. “All of that kind of shifted my advocacy.” She works to change the stigma and misinformation surrounding children with disabilities.

In order to help normalize disabilities and facial deformities, she sometimes allows a glimpse into her home life. She hope that people can see that even though there are challenges and heartache, “There’s still so much happiness and love…I really want to change society’s definition of what beauty, success and values are, and that’s what I fight to do,” said Natalie.

Starting a Nonprofit Organization in Honor of your Daughter

In Sophia’s honor, Natalie has founded Sophia’s Voice. “My advocacy within Sophia’s Voice is to encourage acceptance and inclusion of profoundly disabled children and children with facial deformities. To help people with disabilities receive medical equipment, help with medical debt, for caregivers to receive respite, and for disability activists receive…help with their advocacy,” said Natalie. “It’s all because of Sophia. All the work that I’ve done, everything that I do, the strength that I’ve found and the voice I’ve found, it’s because of her.”