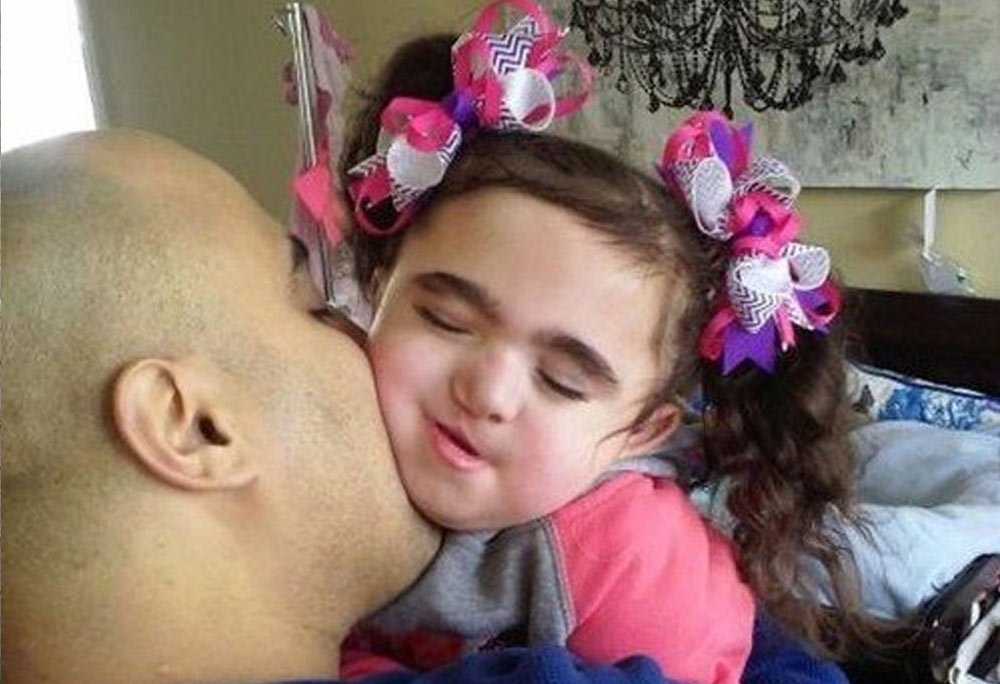 Miriellys and Alex have two children. Their youngest, Aerilyn, was diagnosed with Trisomy 13 or Patau syndrome in utero.  They were encouraged to terminate their pregnancy and were given a grim prognosis. They chose not to listen to their doctor and to give Aerilyn a fighting chance.  Now, 3 years later, they wouldn’t change anything. Aerilyn is a joy and a blessing to their lives.

Trusting in Your Baby

Finding Out More Than the Gender

After the sonographer told them the gender, she left the room.  Miriellys and Alex were thrilled they were having a girl. Quickly that feeling left the room as the doctor entered.  Miriellys recalled, “The first thing she asked me was, ‘Do you know what a cleft lip and cleft palate is?’ I started getting very emotional, and I started crying.”

Her doctor wanted her to have an amniocentesis done to determine what was the cause of the cleft lip and palate.

Results of Amniocentesis Bring Out Range of Emotions

Alex and Miriellys were told that their daughter had Trisomy 13.  Something that ran in Miriellys family. She said, “It was just really intense to get a diagnosis that I already knew some of the problems of in my own family..we have children in our family who have passed away from that diagnosis, and then we have children who are currently living, so we weren’t sure where we were going with our own.”

At first, Alex didn’t really understand what Trisomy 13 entailed. He thought it was just a cleft palate and lip and thought it was more a cosmetic issue that could be fixed.  When he found out, he said, “I felt everything all at one shot. I felt pain, fear, and anger, and I was afraid of what was to come. I was trying to find something to be angry at, like to put blame on..but then I realized that was just a waste of energy.”

Understanding how he was feeling, Miriellys said, “I was up more than the sadness; it was kind of like anger.  ‘What did I do?’..you try and find an answer to it where there is no answer. That is just the way it is. There’s no control over life..it takes you into all different types of directions, and you have to just go with the flow and see what it leads up to.”

This is also known as Patau syndrome.  It is a chromosomal condition that is associated with severe intellectual disability and physical abnormalities.  Most people who have Trisomy 13 have heart defects, brain or spinal cord abnormalities, small poorly developed eyes, extra fingers or toes, cleft palate, cleft lip and weak muscle tone.

Most infants with Trisomy 14 die within their first days or weeks of life.  Only five to 10 percent live past their first year.

Miriellys felt conflicted.  They would have an ultrasound where they were told their baby’s heartbeat was strong, and then another doctor would talk to them about aborting that baby.  “No one should be put up against a wall to have to make a decision over somebody else’s life. I think that’s when I hit rock bottom, when we were faced with what we were going to do.” said Miriellys.

Adjusting to a New Normal

After their first child was born, Alex said, “After Elias, everything was so easy, and being a dad was pretty easy.”  He learned that being a dad to Aerilyn was going to be an adjustment. He said, “Being a dad for her is different..with Elias, I can just bring him out, play some kind of ball game or watch some cartoons..With her, you have to figure it out.  It’s different.”

Miriellys described being a mom to a child with a disability as, “..you’re not just a mom anymore.  You have to wear many hats. Now you’re a therapist, you’re a doctor, you’re a nurse, you’re an advocate, and you’re a receptionist making and taking phone calls.”  Making sure Aerilyn has what she needs to survive is Miriellys’ full time job.

Fighting for What Your Child Needs

Throughout her day, Miriellys is coordinating schedules with the people Aerilyn interacts with.  She has three medical supply companies, 18 specialists, and seven home nurses she needs to arrange to ensure that Aerilyn gets what she needs.

This is something that Miriellys has had to do since Aerilyn was born.  There are several companies that have made it difficult for Miriellys to work with.  She said, “..she has all types of equipment that I had to fight insurance for. Many times they denied us, and I went ahead and kept pushing it..they see a diagnosis that they’ve never heard before and don’t understand, so automatically they say that you don’t need something.  That’s not the case. She needs everything that she has.”

Even though Aerilyn is non-verbal.  Both her parents agree that she spreads joy everywhere she goes.  “..people are really drawn to Aerilyn and inspired by her..she brings out such good in people” Miriellys said.

Alex added, “Surprisingly, she brings a lot of happiness to people.  We see a different side of people that we really don’t see when they interact with her, which is pretty beautiful.”

Miriellys shared one last thought saying, “She’s brought so much into our life and I’m so grateful for every moment of it. It’s just a beautiful life.  It’s okay that we’re tired..but there’s the gift of being the most grateful that you could be, the gift of loving deeper than anything else..I am so blessed and happy that our journey is the way that it is.”