Krystal and Dusty: Spina Bifida and a Heart Defect 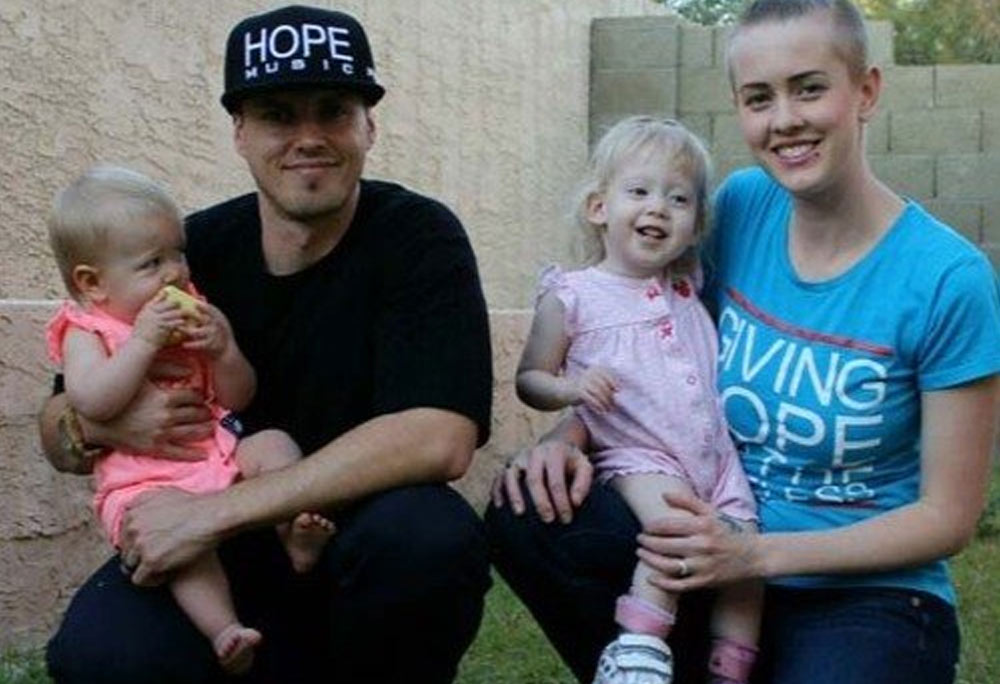 Krystal and Dusty were scared and hurt when they first learned that their daughter, Amnesty, had spina bifida and a heart defect.  They were repeatedly encouraged to abort Amnesty and are grateful everyday they chose life.  She is a great joy to their family and shares her story to help others choose life as well.

Using Daughters Diagnosis to Inspire Others

Being pressured to abort your baby

Early on in their pregnancy Krystal and Dusty were told that their daughter, Amnesty’s, spine hadn’t formed properly.  This meant that Amnesty would be born with spina bifida. “They told us that her spine didn’t form properly..and it didn’t look like she would have much function with her legs.  There were maybe some other issues involving her brain being squeezed by excess fluid, possibly causing brain damage, as well as some bladder issues which would lead to a lack of quality of life.”

During the following ultrasounds they discovered that Amnesty also had a heart defect. This led to their doctor to advise them to ‘explore their options’.  Something that Krystal felt like that statement meant getting an abortion. Other doctors flat out told them to consider an abortion since they were early on in the pregnancy.  Dusty said, “I initially remember that they pushed taking the easy way out rather than going through with what might be a long-term issue with our daughter and her complications.”

For both Krystal and Dusty, the news that Amnesty had spina bifida was hard to process.  Krystal said the moment was ‘surreal’. She called her sister and told her that her baby was broken.  She said, “I felt hopeless. I felt like a victim. I felt like in the moment, it just seemed impossible.”  Krystal always wanted to become a mom, this was not the outcome she ever expected.

Dusty said, “At first it was very, very terrifying to get that initial diagnosis and hear all the negatives..In my memory of it, there was a lot of worry, a lot of fear instilled in us and not a lot of hope for what might be.”

When Amnesty was born, to everyone’s surprise, the major heart defect was gone.  Dusty said, “..she had all these heart issues which became the main issues even above her spina bifida.  The doctors monitored that weekly up until the day she was born. Then, the day she was born, her heart was completely healed.”

He continued, “Her heart was perfectly fine, and that testimony of healing of her heart has given people hope that there are miracles that still happen today..just because a doctor tells you one thing is going to be the way that it is, it doesn’t always turn out that way.”

Fear of losing her is the hardest part

Amnesty is what you would describe as any two-year old sassy girl.  Krystal said that what is sometimes challenging in parenting her, has nothing to do with her diagnosis.  Amnesty is two and acts like a two year old.

What Krystal considers to be the most challenging thing, the fear of losing her.  Amnesty had a shunt placed to help drain some of the fluid from her brain. Krystal said, “..anytime she has a fussy outbreak or throws up or something, the first thought is always, ‘Oh my gosh, maybe it’s her shunt malfunctioning.’ That’s probably been the hardest thing..I’m always scared that i]I’m going to wake up and she hadn’t made it through the night. Just losing her, the fear of losing her.  I love her so much.”

For Dusty, watching his daughter go through surgeries has been hard.  He said, “Well, initially when she was born, she had to have surgery to close a hold in her back and put her spine back in, and then days later another surgery to put in her shunt..we couldn’t really touch her or hold her because she was so fragile..initially her surgeries were the scariest part.”

Making you a better parent

Despite some of the challenging times, Amnesty has brought endless amounts of joy to their family.  Dusty said, “There are so many joys, being a father to this sweet little girl..she’s just so sweet..Going through her issues..I feel like it has made us appreciate our daughter even more to where it’s made us more loving as parents..I know it’s made me a more involved parent.”

Krystal said for her, “There’s just something about her that you cannot forget.  She brings joy to my life because she made me into this new person I am who is much more laid back and much more in the moment. I am just grateful for the struggles in life that I’ve encountered because I can see she’s the direct result of the beauty in the struggle.  Amnesty is our joy.”

Her story is felt far and wide

Amnesty’s heart condition was healed.  That is something that Dusty says is giving people hope.  “I’ve seen that impact people’s lives in our ministry travels. I’ve also seen it impact lives in our immediate family with the spreading of hope that we have a God who still does miracles today.”  Dusty shared.