Amber and Justin: Down Syndrome 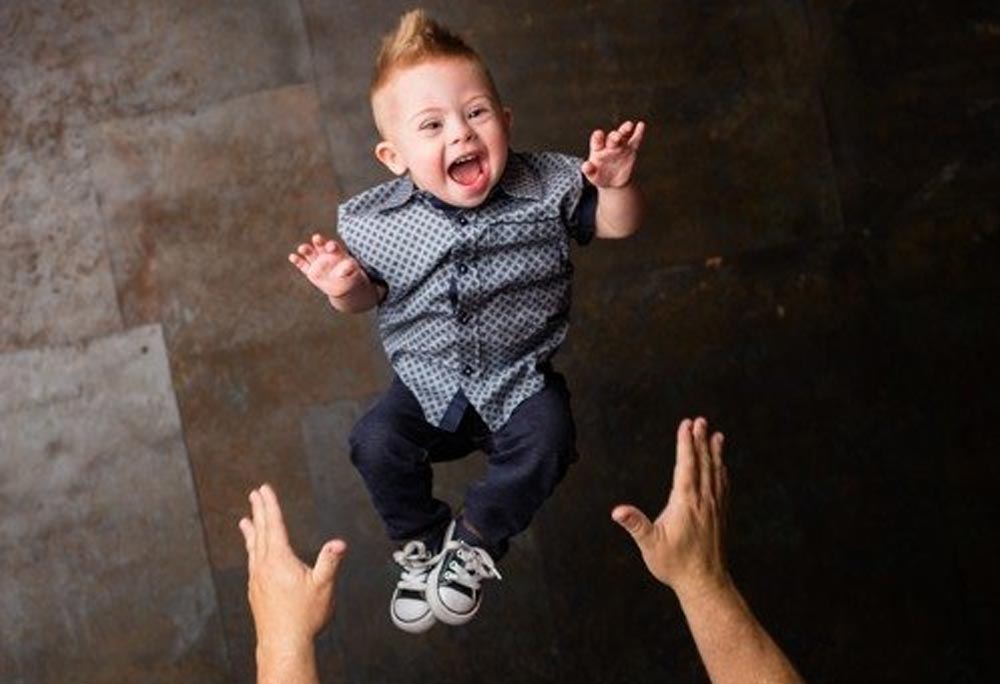 Justin and Amber were nervous to welcome their son, Finneas.  They learned at an ultrasound that their son would be born with some chromosome disorder.  They were told that their son would be a burden and encouraged them to have an abortion. They chose life and are grateful everyday as Finneas, who has Down syndrome, has brought more joy and love into their lives than they could have imagined.

Down Syndrome is Pure Joy

At 14-weeks pregnant, Amber was experiencing some pain and went in for an ultrasound.  They initially thought she had cysts that were bursting. She said, “They noticed that my sacks weren’t growing together, and that indicates a chromosomal abnormality.”  There were three possible diagnoses that they gave Amber and Justin; Trisomy 13, Trisomy 18, or Trisomy 21.

They were offered an abortion because there was a very strong possibility that there was something wrong.  They wanted Amber and Justin to pursue further testing. They both declined knowing that it would be an increased risk of miscarriage.

Results from testing wouldn’t change their opinion about aborting their baby or not.  Just said, “We knew the possibilities and risks were there, and when we found out that there was something wrong, without really knowing the extent of it..we just kept going.”

From the beginning, Amber’s pregnancy was labeled as high-risk.  Amber has MS and was really worried about caring for a child with a disability. She thought, “How am I going to take care of this kid?”

They both were a little apprehensive as to how to tell their other two children.  Amber recalled, “I was worried about the other kids, wondering if they would still be excited..It was scary to me, but that was one of my first thoughts, ‘Are they going to love him?’”

They tell you more negatives than positive ones

Neither Justin and Amber had met anybody with Down syndrome.  They were scared for the unknown. Amber explained that the genetic counselor and doctors didn’t really provide much peace or positivity.  She said, “..honestly, the genetic counselor, the doctor, everyone we talked to that day, is all of the negative things..they tell you how bad their IQ is going to.”

Just agreed when he remembered the advice they received.  He said, “..they spent almost all the time on how much of a burden it is instead of..how beautiful and wonderful it can be.”

When Amber and Justin told their two children that Finneas was going to be born with Down syndrome they had the best reaction.  Amber recalled trying to figure out how to explain what Down syndrome was and how it would affect him. Finally her daughter said, “So, what you’re telling me is that he’s going to be a boy trapped in a man’s body?”  Amber replied, “Actually that is kind of what I’m saying.” Her daughter thought for a minute and finally said with a huge smile on her face, “That is awesome!” Amber questioned why she thought that. Morgan replied, “Because he’ll always be fun!  He’ll always be fun.”

Amber has since recognized several other moments like this that she said, “They are probably the biggest, most wonderful that could have happened that helped me process through because every single thing that I thought of as a negative, my older kids somehow turned into a positive.”

The joy from Down syndrome is contagious

When asked about what was challenging in their life so far with Finneas, both Amber and Justin had a hard time thinking of anything.  They ended up sharing their joys instead! Amber said “He’s just sunshine..He just has a presence. I don’t know how to explain it exactly.  He’s just amazing..it’s just love.”

“It’s a joy you can’t explain.  For Christmas, Amber got me a little calendar with pictures that I have on my desk at work, and when you show people that, they just go, ‘He is just beautiful.’  I can’t explain it, but they are just drawn to him, and that is the biggest joy I have, how he can do absolutely nothing yet he is the biggest spotlight around.” Justin shared.

Wanting 10 more children with Down syndrome

Justin shared, “What comes first to my head if somebody I knew were in our situation or facing that situation, it would just bring a big smile to my face because I know the joy these children bring into our lives..I think if we were to get pregnant again, I would hope for that.  If it did happen, I would have the biggest smile on my face because it is such a joy to have him. It is just pure joy.”