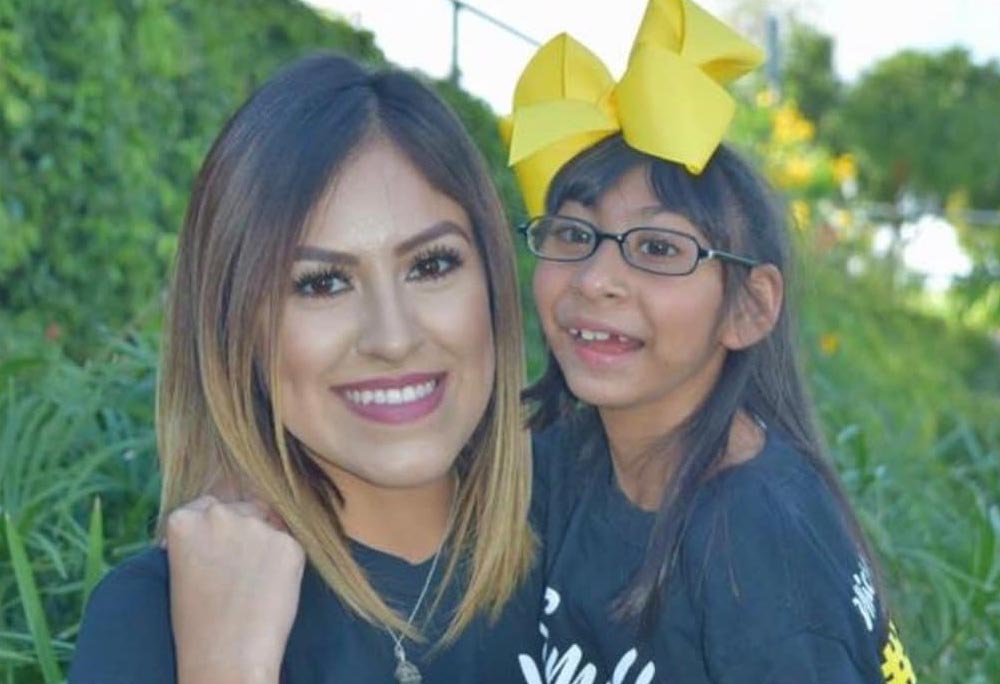 Erika was given a very grim diagnosis when she was six months pregnant.  Her daughter, Erilyn was diagnosed with microcephaly.  She was very pressured to abort Erilyn.  Now eight years later, Erika is grateful she chose life and can see that Erilyn is a blessing and brings joy to everyone she meets.

During a routine ultrasound when she was six months pregnant.  Erika was told that her baby’s head and brain were measuring smaller than normal.  She recalls the doctor telling her that her baby had something called microcephaly.

The doctor then told her if she wanted an abortion, that could happen the next day in San Antonio.  Erika and her mother decided to go to San Antonio and see what that doctor had to say. She recalled, “..sure enough, they did another sonogram and explained about microcephaly..that it was going to cause her to be mentally delayed.  They thought that she would be pretty much like a vegetable if she even lived past birth.”

They also told Erika that she would never walk, talk or do anything on her own.  To even further paint a horrible picture, they showed Erika’s mom a photo of a baby with deformities on the face.  The doctor told her that if she continued the pregnancy that the baby would look like that.

Erika felt very pressured to abort Erilyn.  She said, “I kept saying that I’m already this far along, and I can feel her moving every single day..There is always that ‘what if?’  I couldn’t imagine getting rid of her”

Knowing that there was a chance the doctors were wrong, Erika wanted to give her baby a change to show everyone what she is capable of.

Everything turned out okay

The day of delivery for Erika was “nerve-wracking”.  During her C-section, Erika said, “I just remember praying the whole entire time.  Just praying and praying and hoping that everything would come out okay.”

Erilyn was born with a lot of hair.  “I saw her face and saw that everything was perfect; she looked perfect and she had the cutest little nose, and everything was normal.” Erika said.  Nothing like the doctors had predicted.

Challenges in raising a child with special needs

Microcephaly is a condition where the brain and head are much smaller than expected.  This results in the brain not being fully developed. Each baby is different, but some babies can have seizures, developmental delay, intellectual disability, feeding problems, hearing loss, vision problems, and problems with movement and balance.

For Erika, some of the challenges have been the amount of care that Erilyn requires.  She said, “I still pretty much have to do everything for her. I still have to bathe her, I still have to feed her and change her..I feel like every other day I say, ‘I’m a hot mess’ like my emotions are everywhere all the time.”

Despite the challenges there are many joys

When asked what her joys were, Erika said, “Just everything; she is so amazing everyday. I could be having the hardest day and be in the worst mood, and she will come up to me and give me a kiss and just smile and look at me in the eyes..she’s such a joy to have in our lives.”

Making you want to be a better person

Erika’s family has been blessed by having her in their lives.  Erika said, “I feel like we are all motivated by Erilyn. She makes us all want to be the best that we can be.  Just to appreciate everything and not to take anything for granted.”

Even though there are some challenges that have come up raising Erilyn, Erika said, “This is our life, and we love it, and we wouldn’t change it for anything.”