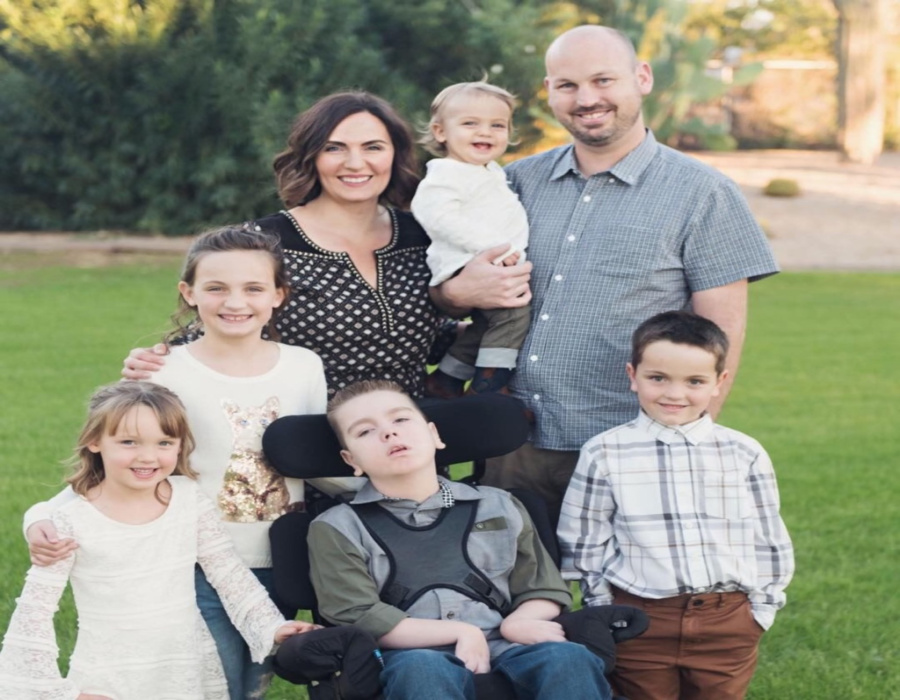 Bryson and Emily were thrilled to welcome their first child Hunter.  They started noticing that Hunter was falling behind in some of his development.  When Hunter started having seizures, they knew something was wrong. He was diagnosed with lissencephaly.  Bryson and Emily were candid about what life has been like over the past 10 years.

Everyone Has Something to Offer the World

When Hunter was born, Bryson and Emily had no reason to suspect that he was anything but perfect.  A few months later, it became more apparent that something was off with him. Emily said, “..he has a cousin who was born five days after him, and we saw those two babies side-by-side, right from the start.”

They noticed Hunter’s cousin was starting to make eye contact, focus on faces and was starting to smile.  This was something that Hunter wasn’t doing. Then Hunter started having some other issues. Bryson recalled, “When Hunter was about three or four months old, he started having seizures.”  At first they didn’t know they were seizures and made an appointment with his doctor. The seizures continued and Bryson and Emily ended up at an urgent care facility where they were then transferred to Primary Children’s Hospital.

Parents were devastated by diagnosis

After Bryson and Emily learned that Hunter had lissencephaly they were heartbroken.  “It was pretty devastating I think at first. You have an idea, he was our first kid, so you get the nursery together and decorate the room.  You think of soccer games and just everything else that you’ve got in your head of how your life with children is going to go, and it was quite a different story than what I had in mind.” Bryson shared.

Emily was equally as devastated, she said, “I think it shattered both of us.  It was really bleak too. Because what they told us in the ER was that he wasn’t going to live very long and that his quality of life would be horrible..we went home feeling pretty shattered.”

When translated, lissencephaly means ‘smooth brain’.  It is a rare genetic condition that causes the child’s brain to develop improperly during pregnancy. This can result in a wide variety of severity and symptoms.

Challenges in raising a total-care child

Hunter is what is considered as total-care.  Meaning that he is unable to perform any tasks independently.  Bryson said that at first, it was easier to take care of him. He was small and easier to transport.  “..as he’s gotten bigger, he has required more help. We’ve had more children too, so juggling all of that is the biggest challenge.” Bryson said.

For Emily the biggest challenge is what she referred to as ‘sensory overload.’  She said, “From the time that he was really little, you could hear him kind of struggling to breathe.  He has a hard time managing all of his secretions, and so everywhere you go in the house, you can’t be too far away, and you hear him struggling for every breath.”

His time is limited

When Hunter was first diagnosed, the doctor said, “He’ll probably live two to five years.  Maybe best-case scenario, eight years.” Emily and Bryson knew their time was limited and decided to dedicate all of their time, effort, and energy to Hunter.  Bryson said that his level of focused parenting has spilled over to their other children as well.

Emily contributes knowing how strong she truly is to Hunter.  She said, “I think that he shows me everyday, how to endure things that are hard with courage and grace and I feel like I can’t help but try and walk through this journey of his, here on this earth with him, without being inspired by how he faces challenges…one of the biggest blessings have been to see the love and the good things in other people that he seems to bring out.”

Don’t miss out on beautiful because of a diagnosis

In her advice to other parents, Emily said, “Everybody brings something beautiful to this earth and life.  It’s just, don’t be closed off to what the person could bring to the world..don’t let the fear and all of those things that I think can come with a diagnosis like that, make you shut the door on that whole experience.  Be open to whatever that child is going to bring into your life.”

Children are unpredictable, especially children with disabilities.  Bryson said for him he was able to handle the curves life threw at him by having a sense of humor.  He said, “..you’re going to doctors, a lot of the things you do seem very, very heavy and they can be and they are..having that perspective to sit back and laugh and make fun of a doctor, and make fun of your kid a little bit and joke, it’s helped.”