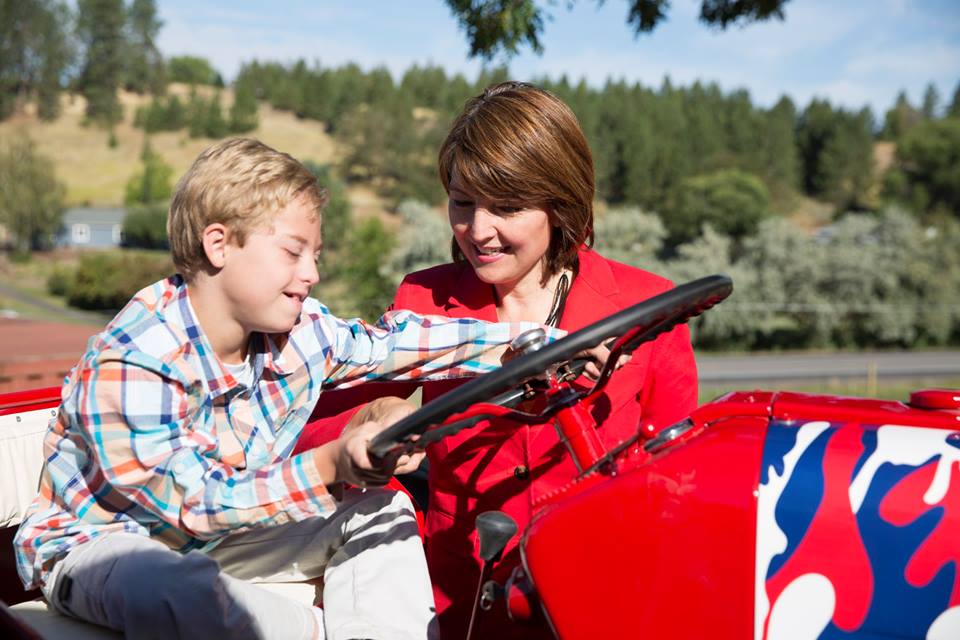 Down Syndrome: A Joyful Journey

Cathy and Brian found out their child had a possible diagnosis of Down syndrome at her eight-month prenatal ultrasound check, when during the ultrasound the doctor spotted some blockage in his intestines. They were told that one in three babies with this blockage have Down syndrome.

The Ultrasound Revealed an Intestinal Blockage

During a routine ultrasound the doctors detected an intestinal blockage called duodenal atresia. This meant surgery as soon as Cole was born. “In the course of preparing us for that surgery, one of the doctors had said ‘you should be aware that 1 out of 3 babies born with this blockage has Down syndrome’.” Cathy said. “So, we knew that our odds had gone up pretty dramatically. I was an older mom. They had done different tests and had been watching. They hadn’t detected anything up until that point.” Cathy and Brian found out that Cole had Down syndrome after he was born.

“It Was Very Difficult to Say the Words Out Loud”

Cathy and Brian found out that Cole has Down syndrome at his birth. “It was tough. The doctors laid out a lot of things and it was very difficult.” Brian said. “We married later in life, we have our first born and we were just excited about it. Then to get that diagnosis was very tough.”

Someone told Cathy that this was a gift from God but at that moment she wasn’t ready to hear that. “It was very difficult at the beginning even to say the words out loud as you’re telling your family and your friends. I remember wondering if I’d ever be able to talk about it without crying.”

Talking About it with Joy Took Some Time

It took a few years for Brian to be able to feel joyful about Cole. “When Cole was born, I felt a sense of responsibility. I felt a sense of duty to raise this child the best I could. But I viewed it as a project.” Brian said. After a while Brian really started to see Cole’s personality. “I shifted from a responsibility to really embracing and loving Cole for who he is.”

Cathy found it helpful to talk to other people who were in the same situation. “In my position, in Congress, I had a lot of people, hundreds of people that were reaching out across the country. And even in other countries around the world, through emails and cards wanting to be encouraging.” Cathy still has and cherishes the notes. “They wanted me to know, and wanted us to know, that it was going to be a positive. That we were going to find a lot of joy in our son, and it’s very true.”

Other people also reached out to Cathy and Brian. It was very healing to talk with other people who understood. “Who had been there, who had experienced the same feelings and emotions, and had gotten to a very positive place,” Cathy said.

The Joys of Having a Child with Down Syndrome are Real

“For me, I feel like Cole has just kind of taken some blinders off my eyes. I see every person very differently and it’s the difference between having head knowledge and now a heart knowledge as to the value and the potential of every life,” Cathy said. “Having a son with Down syndrome, it has been very much a positive.” Cathy and Brian celebrate each of Cole’s successes and every developmental step. They find joy in watching him reach his potential.

Finding the Right Way to Challenge and Support Cole

“I think the most difficult thing with Cole is that he is on his own trajectory. I keep wanting to compare Cole’s trajectory with the typical trajectory, but they are different,” said Brian. “So, I’m always trying to find out if he’s being pushed too hard, or not enough, and what’s appropriate for him.”

Cathy and Brian have discovered that Cole is more typical than different. “I never want to underestimate him,” said Brian. “He’ll surprise you.”

A Typical Day in the Life of Cole

“Well, I would say Cole’s typical day is typical of any fifth grader,” said Brian. “We’re up in the morning and we do a little school work, breakfast and then we are pushing him to get his teeth brushed.”

They walk to school and after school he’s usually outside playing with his sisters, and after dinner he does homework.

They Gave Some Thought About Having More Children

Cathy is the first member of Congress to have given birth three times while in office. After Cole was born, they gave it some thought as to whether they would have more children. “The odds of having a second child with Down syndrome are pretty slim. I believe it’s just 1% more that the odds in general,” said Cathy. “I had known a couple of families who had more than one child with Down syndrome…so it certainly was in the back of our minds.”

They wanted more children and decided they were ready for whatever happened. Cole now has two younger sisters. “It is my hope that they are going to be fierce champions for everyone and those with disabilities,” said Cathy. “They love their brother; they enjoy playing with him. They are all very competitive and my hope is that they continue to be a fierce defender and champion for him and so many others who have disabilities.” Cole has been a positive impact on his sisters.

Researching Down Syndrome is Important

Cathy emphasized the importance of “telling the world… of more research and what it could mean, not just for those with Down syndrome, but for millions of other people.”

“About half of the kids born with Down syndrome are born with a hole in their hearts but there aren’t any cases of heart failure or heart attacks. People with Down syndrome also have a higher incidence of Leukemia but not other kinds of cancers. Nearly all develop Alzheimer disease too. Research into Down syndrome would not only help those with the syndrome but provide answers for many other people too” said Cathy.

Brian retired after 26 years as a Naval Commander and Cathy is an eight-term member of the U. S. House of Representatives. They met after Brian retired from the Navy, and then they married and started a family. They both have demanding schedules. “Brian makes it possible for me to serve in Congress…He’s sacrificed a lot to be home with the kids, day in and day out.” said Cathy. “Yet, he does that to make it possible for us to do what we’re doing.”

“Life is life. Everybody has things going on. You make it work and I think things have worked out well. We certainly had challenges, along the way.” said Brian

They Are Both Advocates for Those with Disabilities

Cathy and Brian are passionate leaders in helping people with Down syndrome get meaningful employment. “What we want to do is get those individuals employed, and with employment there comes a plethora of positive things from social interactions to a paycheck,” says Brian. He wants companies to see that a person with Down syndrome can make a positive difference and can contribute to the company.

Cathy has served as the Chair of the House Republican Conference and was recently appointed as the Republican representative to the United Nations. She has sponsored and passed several key bills that positively affect people with disabilities. She is currently working to pass a bill, Transformation to Competitive Employment Act. “My hope is to continue to move society to see the ability that every person has. They may have a disability but to really focus on the ability and what the individual can offer,” said Cathy. “The goal of this legislations is to phase out that subminimum wage and to move these individuals into minimum wage positions.”

There are more organizations now that are focused on helping people with disabilities to get meaningful employment and to help them with education and training. They are also working with employers to help bridge the gap.

“I would say that the journey is going to be a little different, but it’s going to be a good different, a positive,” said Brian. “You have a very beautiful, young child that has a bright future. Invest in them like you would any child and you are going to see the fruits of this wonderful, little relationship.”

“The fear of the unknown is what is overwhelming in that moment. Go talk to other people, don’t make an isolated decision. Educate yourself,” Cathy said. “I remember when we go the news about Cole, that so much of it was focused on the negative. It was focused on what health issues he may have or other challenges. Rather than really being told what the potential was.”

“Cole has exceeded all expectations. I’ve learned not to put limits on this guy. He’s an amazing kid. He’s very personable, he’s very active, he loves to make you laugh,” said Cathy. “I’m so grateful that Cole has had this influence on my life and, even though it’s not what I had expected or dreamed, it is very positive.”