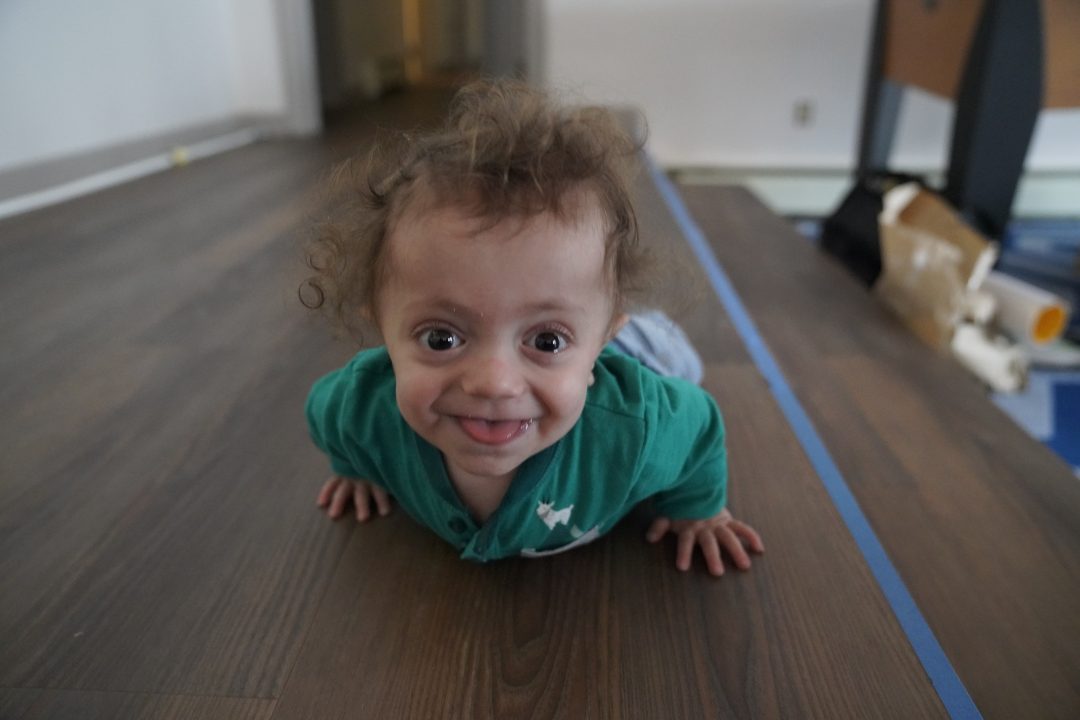 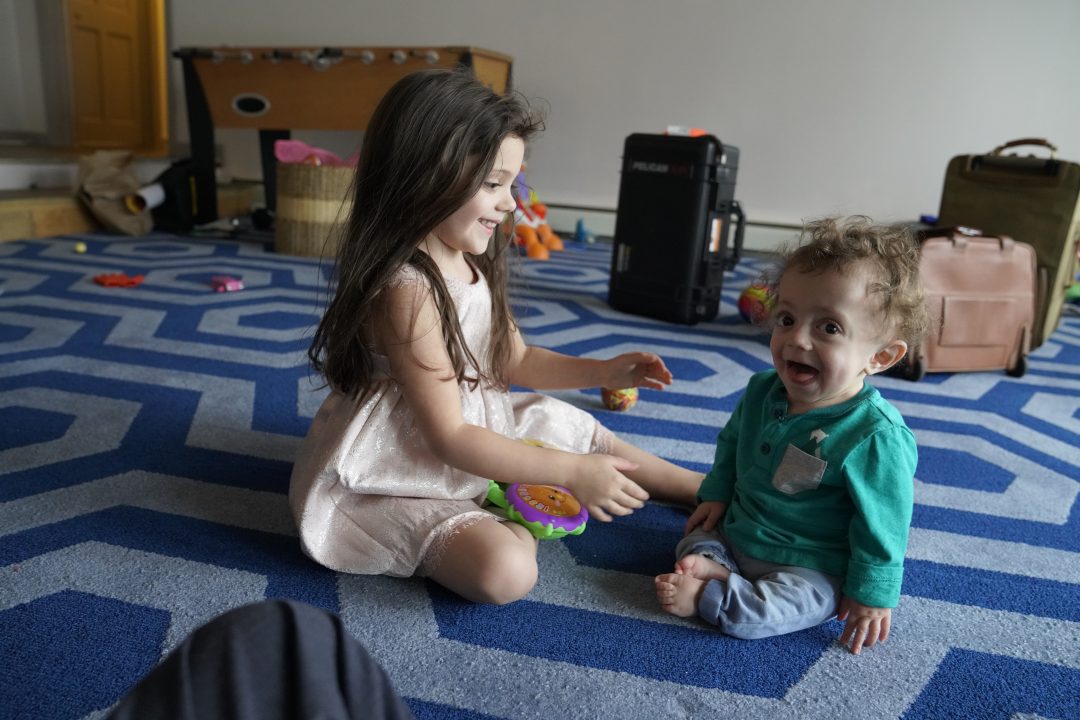 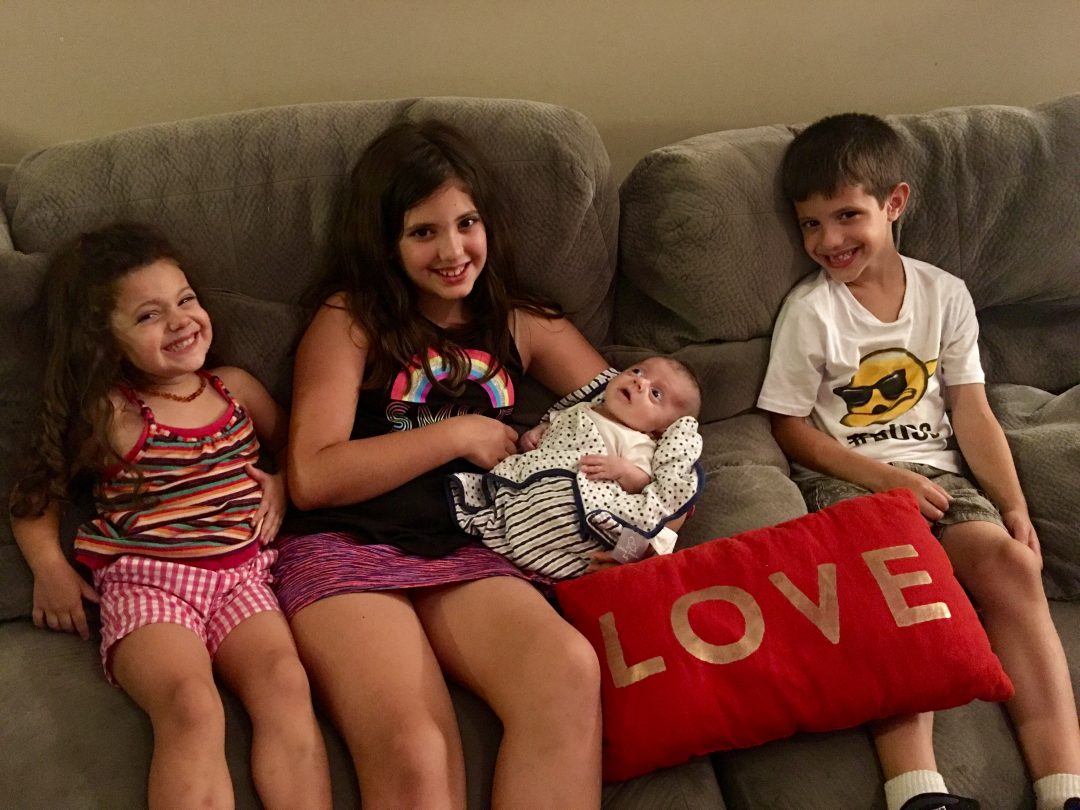 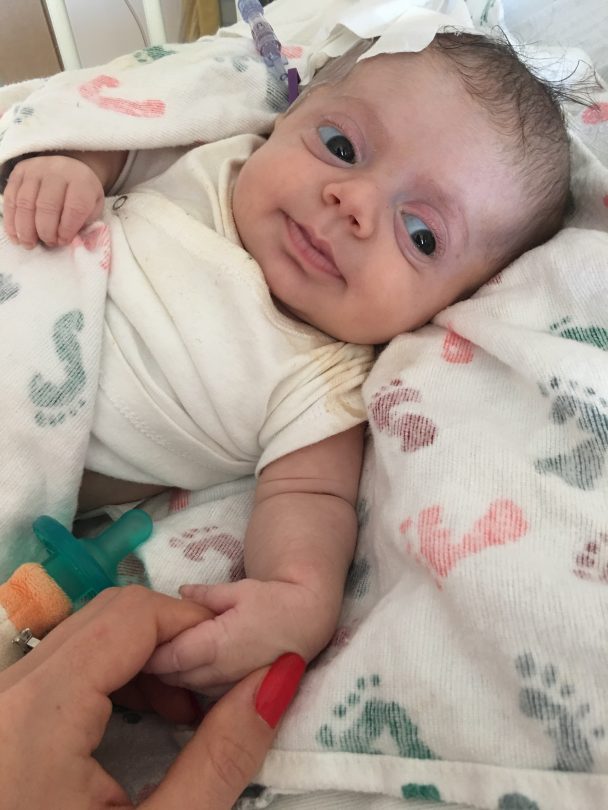 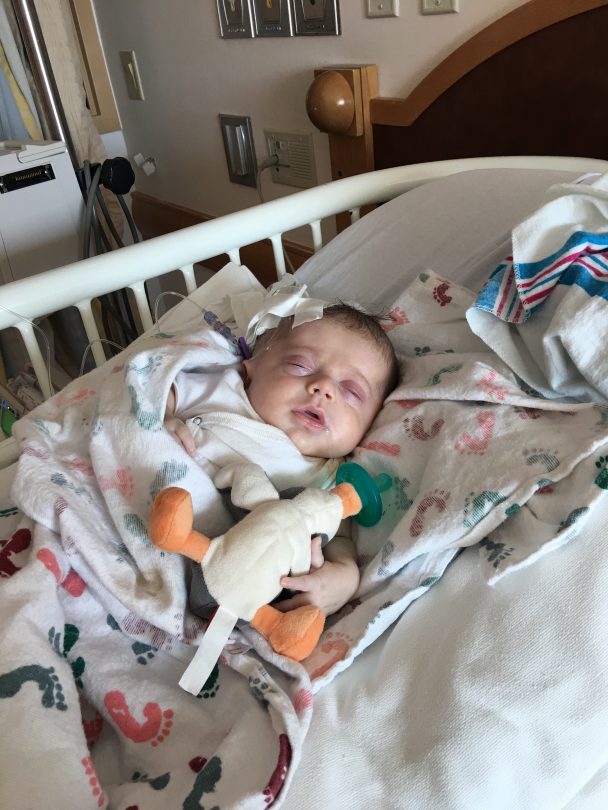 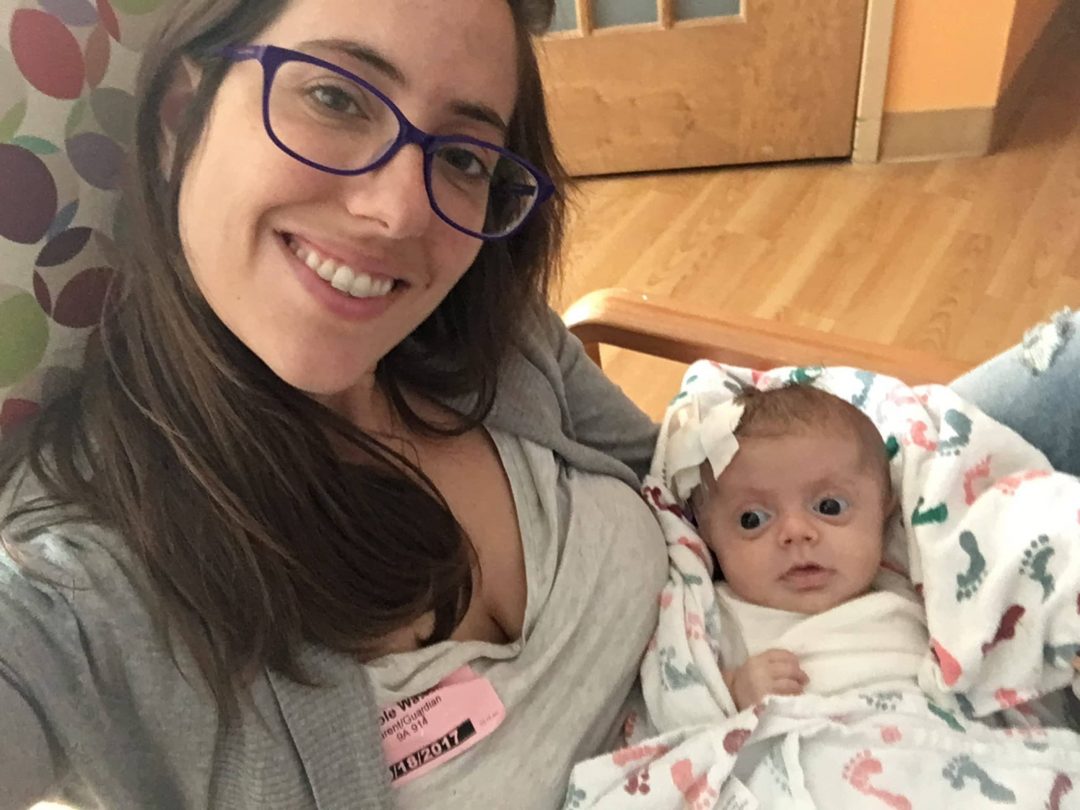 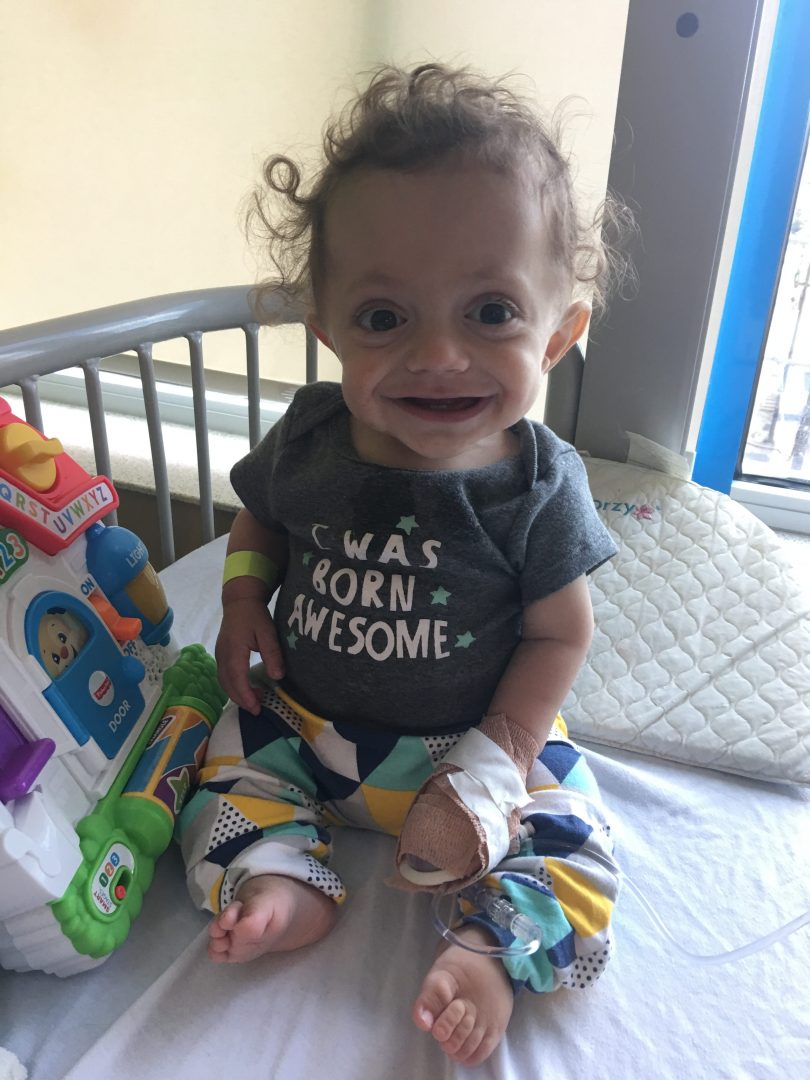 Nikki and Sean went in for a routine 20-week ultrasound when it was noticed that their baby’s legs were shorter than expected. They were referred to a specialist who, at 28 weeks’ gestation, suspected osteogenesis imperfecta, also known as Brittle Bone syndrome.

Nikki and Sean went in for the routine 20-week ultrasound. At the end of 45 minutes the technician stated, “The baby’s legs are short. I can’t find the baby’s legs.” They were referred to a bigger hospital and were told, “We think it’s a form of Dwarfism based on his femur length. His femurs are shortened and curved, and so that’s a marker for other conditions.”

Osteogenesis Imperfecta Diagnosis is a Shocking Thought at First

“During the ultrasound he showed us his head was soft. You get a knot in your stomach. You don’t want anything to be wrong with your kids,” said Sean. “But it didn’t get worse than that. We started to understand to understand what this was, and we talked about it as pragmatically as we could.” Sean and Nikki talked with each other about best- and worst-case scenarios and started processing their feelings.

Genetics Counselor Brought up Possibility of Ending the Pregnancy

Nikki and Sean went to a genetics counselor who told them they could consider an abortion. They wanted to think through their options. “Is this something we really should continue with? This is really scary,” said Nikki. “Do we want to bring a child into this world who will suffer physically and break bones all the time?”

Sean and Nikki thought about what his future would be like. Could really bring a child into the world that was going to suffer? It took them a while to wrap their minds around the situation.

“They gave us no information about what we could expect. They couldn’t tell us if the baby would survive birth.” Nikki said the last 5 months of her pregnancy was difficult, but they decided to move through it with a lot of faith. “We just wanted to allow whatever was meant to be.”

This was Nikki’s fourth pregnancy. She had previously had home births. She had in her mind how it was supposed to be with this baby. At one point to read a poem called “Welcome to Holland,” she said. “It deepened my faith.”

Nikki had a lot of worries about her baby dying and how her children would deal with it all. “That is where I strengthened my faith, because I kept hearing God say ‘give him a shot.’ His life and soul and his faith and purpose is far greater that any fear that you have. This isn’t about you…although I felt like we could lose this child, I also simultaneously felt this strong sense of ‘it’s going to be okay, you’re going to have this baby, it’s going to be great,” said Nikki.

“My wife did as much research as she could immediately and really took ownership over how this was going to work through the pregnancy,” said Sean. They were concerned because they had not been referred to specialists. “I had to do my own research…to find OI specialists. I had a conversation with a genetics doctor in Delaware, they specialize in OI there,” Nikki said. She gathered information that helped her prepare for her son’s birth and caring for him after he was born.

When their baby was born, he had 26 plus fractures that occurred before and from the birth. He was extremely medically fragile. From the research she had done she learned that a C-section would break bones in his torso that would possibly pierce his heart. Nikki decided to do a natural birth to give him the best possible chance of survival. They were lucky and he only spent 5 days in the NICU.

Nikki and Sean are very careful when they pick him up, hold him or even change him. “I don’t pull on his legs, I don’t pull on his limbs,” said Nikki. Their baby receives treatment to help his bones be stronger and when he does have a bone break it grows back stronger. “His bones will always be fragile; they will never be non -OI bones but they are getting stronger.

Siblings are Fantastic with their Brother

Each of his siblings have grown and matured because of the physical problems of their brother. They have all treated him with care and love. “There hasn’t been one accident with the children not being careful enough around him,” said Sean. Their brother’s special spirit has given them empathy and helped them grow in love.

Parents Offer Advice to Others Facing an OI Journey

“I feel like it does take a lot of faith, and if you can find people that are supportive of you and your conviction, your story is going to pan out however it’s meant to be,” said Nikki. “There are certain things that define you in life, and I think that it’s all a good journey. Be as positive as you can be and have a lot of faith.”

Nikki advises others facing a similar diagnosis to process their emotions and to recognize moments of joy. Sean said “I got this mind set early on and I would want to give this to somebody else ‘it’s going to be what it is. It’s going to be exactly what it’s supposed to be.’ That’s advice for everything in life.”