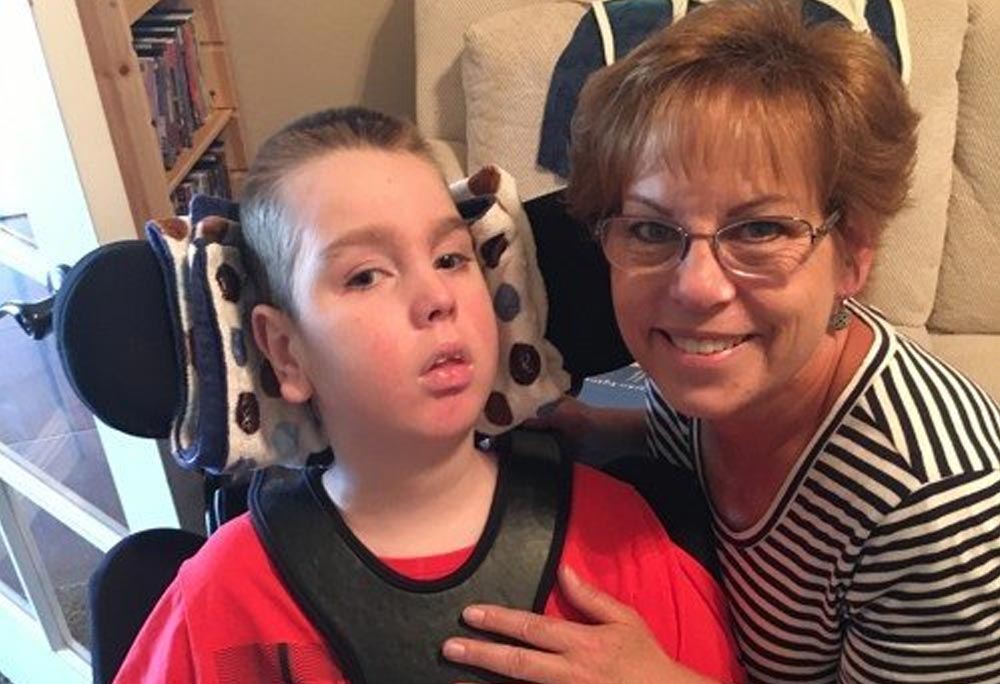 Janeen is the proud grandparent of Hunter, a 10 year old boy who was diagnosed with lissencephaly.  Janeen was candid about her experience with Hunter and the joy he has brought into her life and his family’s life.

Even though Hunter wasn’t officially diagnosed until he was four months old, Janeen said that when he was born they suspected that something was wrong.  She recalled, “He didn’t hold his head quite right, he couldn’t nurse, and he wasn’t sucking.” They thought maybe he was just developmentally delayed.

Hunter had a cousin who was born just a few days before him, this made it tricky to not compare the two.  However, as the months went on, the differences between the cousins was undeniable. “He would arch his back quite often; he wouldn’t cuddle, just arch his back.” Janeen said.

One day, Janeen received a phone call that would change everything.  Hunter had a seizure and was at Primary Children’s Hospital. “They did a CAT scan and MRI..they called us all in when the neurosurgeon was there, and he told us what Hunter had..I witnessed two parents fall to their knees and sob, you know, just sob.”

Translated, lissencephaly means ‘smooth brain’.  It is a rare genetic condition that causes the child’s brain to develop improperly during pregnancy. This can result in a wide variety of severity and symptoms.

For Hunter, he has been in a wheelchair for most of his life, he is non-verbal and uses the assistance of a feeding tube. Depending on the severity, they can have a shorter life expectancy.  Bryson and Emily were told that Hunter would only live until he was five, he is now 10.

Hardest part as a Grandma

“Watching the seizures was probably the hardest part at first.  He never cries tears, but with the seizures, he’d cry tears and so sometimes I’d just cry with him..feeding him was hard as he didn’t swallow until he got the feeding tube; it took a long time to feed him.” Janeen said.

Hunter became increasingly difficult to care for.  Janeen said, “To carry him around was difficult; he’s 10 years old, but he’s as tall as I am now.  He’s got tall parents, and so he’s tall and dead weight, and he doesn’t help you a whole lot. To pick him up, carry him around and move him from his bed to his wheelchair or somewhere, that got hard for me.”

Finding peace in his diagnosis

Living so close, Janeen was able to witness how Emily and Bryson dealt with Hunter’s diagnosis.  A few days after his diagnosis she went over to see how they were doing. She recalled, “I got over there, and Bryson was laying on the couch by Hunter, and I walked in there and went to kiss Hunter on the check, and Bryson said, ‘See, I told you you’d get more kisses now.’..I was a little shocked.”

Bryson told Janeen that all along he knew something was wrong.  Getting an official diagnosis was something that put him at ease.  He was finally able to find peace and deal with it. Janeen was expecting there to be more heartache and all she saw was peace, calm, and love.

Moving away was the best thing

When Hunter was almost seven years old, he moved with his family to Arizona to have better access to state services.  His parents used to switch off every other night who would help Hunter. When they moved to Arizona, they were able to get him nurses that would come at night.

Janeen said, “..for the first time in their lives, they slept.  I think it changed their lives.” They were also able to get two caretakers to come in their home and help in their home.  This helped Bryson and Emily have more freedom to interact with their other children as well.

Janeen said that for her, she found joy when Hunter would smile.  She described him as having a ‘celestial face’ that would light up when he recognized voices or singing.  It was later discovered that Hunter was blind, which is why he didn’t make eye contact.

He could, however, recognize voices.  This was something that Janeen said would cause him to grin from ear-to-ear.  Hunter has impacted their family by bringing them closer together. She said “I think the love you feel is beyond words.”