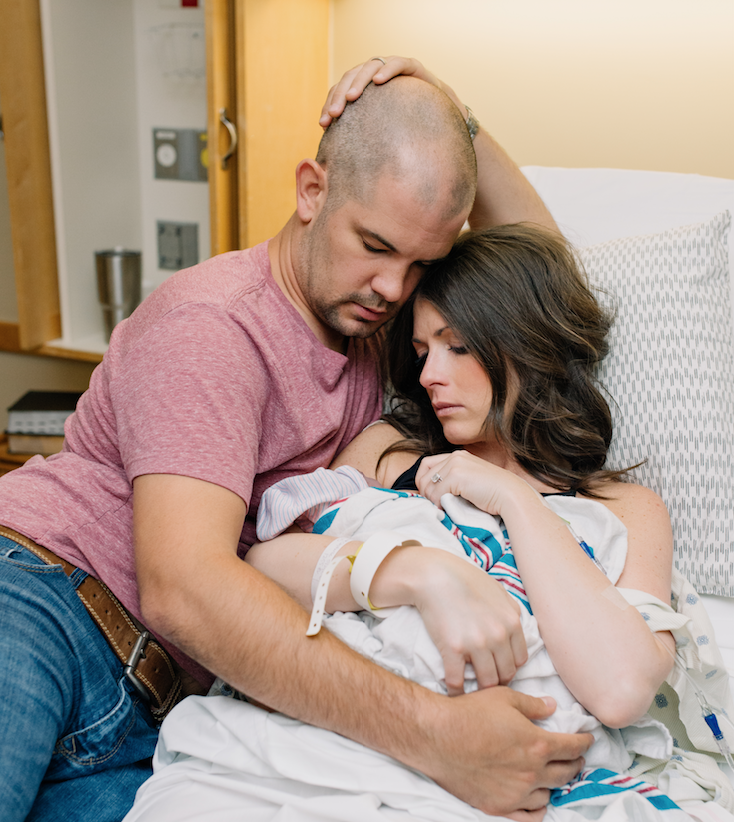 Stephanie and Andy were recently married when they found out Stephanie was pregnant.  Having planned the pregnancy, they were extremely excited for the arrival of their baby girl.  However, Grace was diagnosed with acrania anencephaly, a terminal diagnosis. In honor of her legacy they launched a company to help others navigate a terminal diagnosis called, Carrying to Term.

Not Letting a Diagnosis Define Who You Are

Life was great, until the diagnosis

Stephanie shared with us how she felt their life was coming together.  She stated, “We had our dream wedding and honeymoon experience. We were living together, getting our home..We were at a really high point in life, and a few months later, we learned that I was pregnant.  We were so excited that God answered a prayer so quickly and easily for us.”

She continued later saying, “A few months later..we received the diagnosis that started off as Acrania, where part of Grace’s skill was missing. Overtime that turned into a diagnosis of Anencephaly.”

Dealing with a terminal diagnosis

Andy shared what happened after they received the diagnosis.  He said, “We were devastated. We cried immediately. There was a lot of being scared about what this journey was going to look like, a lack of knowledge about what it looks like to go through the next six months of our pregnancy…one of the really hard things for us was that the doctor didn’t know if Grace was going to live a month or all six months.”

He continued, “..we really just tried to live in the moment and enjoy the time we had with her.  We weren’t able to take grace to the park, so we went to the park, and we tried to do things we would do with a six-week-old or an eight-week-old, to try to be as much of a family as we could in that moment.”

Stephanie and Andy had two very different experiences at the doctors offices post diagnosis.  The doctor who first broke the news to them was described by Stephanie as, “..he was very compassionate. He extended his sincere apologies that he couldn’t give us the news that we had hoped for that day.”  The doctor then referred them to a perinatologist to confirm the diagnosis.

At the perinatologist is where they received a less pleasant experience. Stephanie recalled, “She confirmed that this was Acrania Anencephaly, and she said we could induce early and try again.”  At first, Stephanie wasn’t sure that the perinatologist was encouraging them to terminate the pregnancy. After this was made known, both Stephanie and Andy said, “Absolutely not.”

“We concluded that the appointment and got out of there as quickly as we could..this diagnosis didn’t define her, and having someone encourage us to end her life based on that diagnosis.  We couldn’t personally comprehend that.” Stephanie shared.

Baby lives for 10 hours and 32 minutes

He said, “She had such an impact on our lives and our families’ lives and other people’s lives.  Steph shared our story on Instagram. We had people who came to us and said, ‘I was headed to Planned Parenthood to have an abortion, and I saw what you guys are going through.  Something hit me.’..I’d say she has probably had more impact in 10 hours and 32 minutes than most people have had in their entire lives.”

After their experience with Grace, Andy and Stephanie both felt a call to share their journey with others and help others in a similar situation.  They started Carrying to Term; a company that provides resources and support to the medical community, parents, relatives, and friends.

Carrying to Term can be found at carryingtoterm.org.  They have provided brochures in medical clinics in 12 states and have helped hundreds of expected parents dealing with a terminal diagnosis.  The information they provide also helps physicians to better understand their patients’ needs and how to better help them.