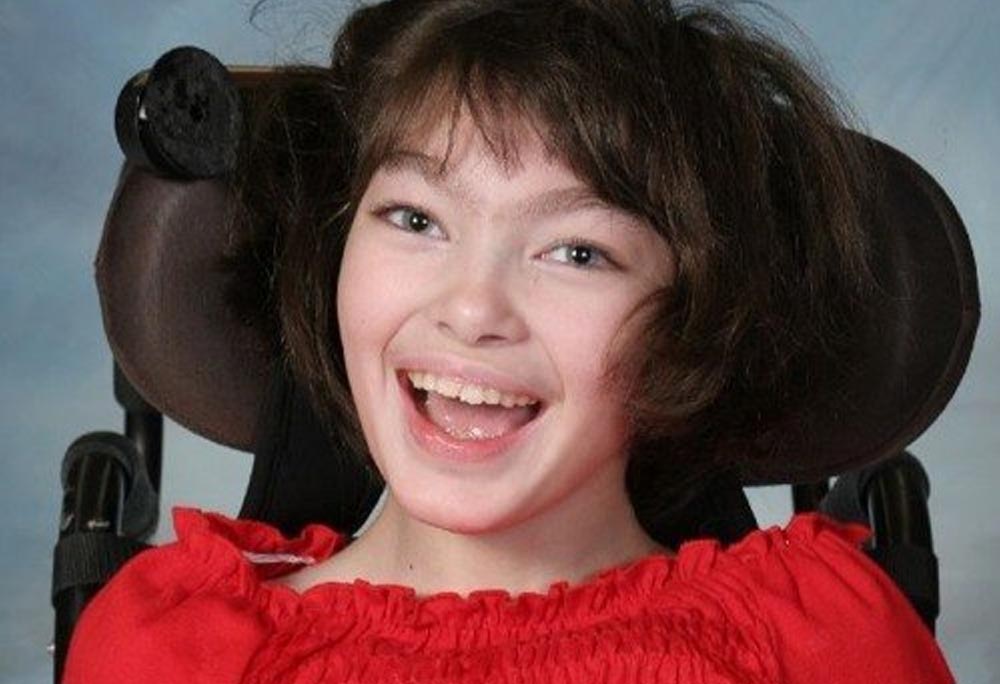 When Laura wasn’t meeting developmental milestones, Keven and Phyllis brought her their pediatrician.  They were shocked to learn that she had polymicrogyria. Over the years they realized what  an absolute joy to Laura was to have in their family.

Phyllis, Laura’s mother, was suspicious of something being wrong with her.  Phyllis recalled, “When she was about three of four months old, we went to the doctor because she wasn’t progressing.  She wasn’t making the normal milestones. He checked her and felt there was something wrong with her, so he had us go to the neurologist; and that’s when we found out.”

She continued saying, “At first, she didn’t know what it was.  Then we found out it was Polymicrogyria, which means that the brain didn’t develop normally. If you look at a picture of a brain, it has little folds in it, and she has lots of tiny folds but none of them were very deep.”

Dealing with the Diagnosis of Your Child

Phyllis and Keven experienced what most parents do when given a diagnosis.  Their world was turned upside down. Phyllis said, “I was crushed. I asked myself, ‘Why me? Why did this happen to me? I do everything I’m supposed to do.  I’m a good person and I try hard to do what I should do. Why me?’ that’s how I felt.”

Keven’s reaction was initially different from his wife.  He said, “I had a lot of hope, still thinking that the doctors would figure something out.  I thought that eventually she would come around and get cured..I didn’t have that full reality that she wouldn’t develop.”

Feeding Her was a Challenge

When asked about the challenges of life with Laura, both Keven and Phyllis agreed; feeding her. Laura was unable to walk, talk, feed, or do anything for herself.  Phyllis said, “Feeding her was really hard as she had a hard time eating. She had a tonic bite. She would bite down and then couldn’t release her bit. It took forever to feed her.  She would gag and the food wouldn’t go down.”

Laura had a feeding tube.  For Keven, that was scary. He said, “I guess i worried a little bit her not growing, but once the feeling tube was in, that was its own little fear of learning how, to visually see a tube in her tummy that connected into feed her.”

The Joy of Laura was Undeniable

One thing Laura was known for was her ‘killer smile’.  Keven stated, “You could always tell when she was happy, which was usually the case..there were the joys of just holding her, she was happy..she was always smiling at you and interested if you would sit and talk with her or read her a story; she was always attentive.”

Sharing her joys with Laura, Phyllis said, “Holding her and snuggling her.  She was the best kid I ever had. She never talked back to me. She never ran away from me in the store, and she was happy.  She was such a happy person.”

Grieving the Loss of Your Child

Laura passed away when she was ten years old.  Phyllis described that loss as, “That was so hard, so hard.  I think we lost a child twice. When she was born and she wasn’t a typical child, it was like we lost the vision of that child, and then we accepted her for who she was, and learned to love her and enjoy her.  Then we lost her when she died; we lost our child all over again.”

Even though she only lived for ten years.  Keven and Phyllis described her impact on their family. Keven said, “All of the kids learned to feed her and take care of her and it’s nice that they were all introduced to the concept of handicapped people so their eyes were opened into accepting others who were of that nature.  They all loved her. We all learned to just love her.”

Phyllis added, “I think she taught my kids to be more compassionate that they would have been..I feel like Laura came here to teach us.  She didn’t belong to just us. People in the neighborhood would think they were so special because they would come up to her and she would smile at them.”

The Greatest Pain was Losing Her

Even though Phyllis was initially devastated upon hearing Laura’s diagnosis, she had this to say to parents with a similar diagnosis, “..it took us a long time to realize how blessed we were to have Laura…she brought so much joy into our lives that I wish she was still with us.  The greatest pain was when we lost her.”

Keven wanted to share this with parents, “I guess i’d explain that life will be a little bit different in handling children like this, and there might be a little bit more time that you need to spend taking care of them, but I would tell you it’s the best thing in the world.”