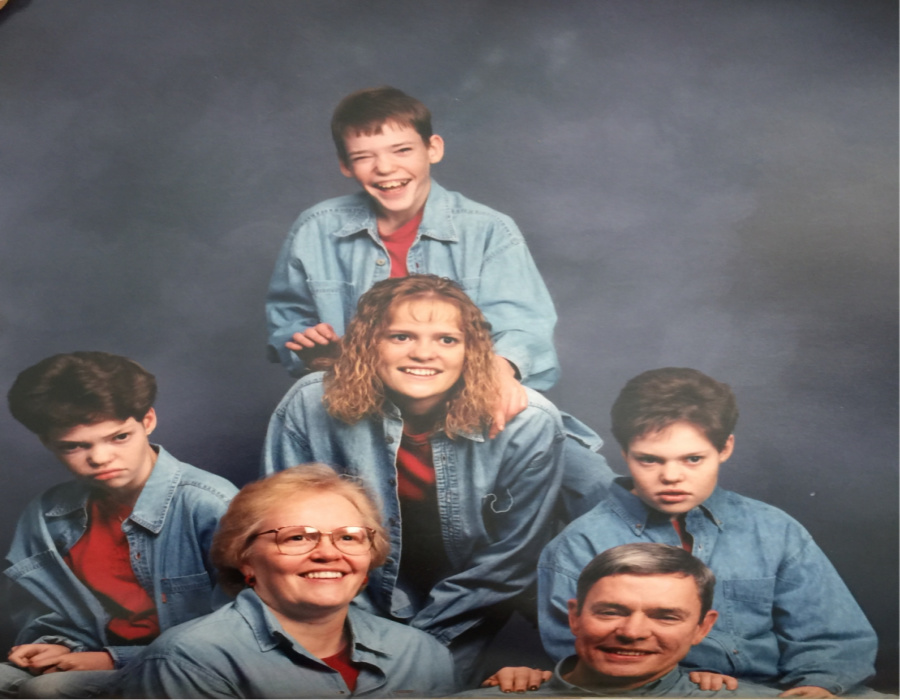 Having Multiple Children with a Disability

Being born with no issues

Camille explained that all three of her children were born presenting no issues.  Around five to seven months, is when they started having seizures. Camille said, “The oldest one was considered a genius.  She was able to put a puzzle together at the age of four months, and she was able to walk into the doctor’s office three or four steps on her own by the age of seven months, and then she had her first seizure.”

No explanation for seizures

“..they never found a specific reason for it or a name for it.  They all had the same issue, and then the learning disabilities on top of that were all slightly different.” Camille explained. With their first child, Camille said she had a really hard time dealing with the onset of a disability.  She said, “..she had been doing so well and was so bright and cheerful, and then suddenly began having so many problems.”

As her seizures increased, so did the doctors appointments.  Martin was working so Camille had to go to those alone. Something that Camille said “..it was quite difficult.”  As she was talking to the doctors, she said, “I started to think, ‘You know, this is what we’ve got to deal with, and we’ll just figure it out.  We’ll make it work.” She shifted the focus of trying to solve the issue to more of, “Okay, how can we make it better for her?”

Hardest part was the best part

Camille and Martin chose to have their children home with them instead of placing them in an institution.  This meant they needed to advocate for their children to get them the support and services they needed to be in a traditional school.  Camille said that they were met with pushback from the school districts.

She said, “They would say, ‘Well, you’re the only parent that wants that.’  And we’d say, ‘Well, we have three kids like this, so we have three children that we want this for.’ and so by having the multiples, we had a little more push for them to consider it. “  Her advocacy for her children started to help with the organization of local programs in their city.

For Martin, he said that introduction of the IDEA bill made access to services easier for them.  IDEA or the Individuals with Disabilities Education Act is a federal law that ensures that people with disabilities get free appropriate access to a public education.

Even though this law was passed, Martin said that they were still met with resistance from the school district.  He said, “..we had to educate the local public school system as to what was best for our kids rather than what was convenient for them to present to us.”  The school would argue that they were the only parents pushing for services and other children didn’t need them. What they learned was that other parents needed and wanted services, but they weren’t aware that they could ask for them.

“I think the districts were caught in the middle because they had a financial issue regards to these kinds of services and at the same time, they were obligated to take care of business by federal law.  That was a struggle too, that was difficult.” Martin said.

The impact multiple children with disabilities have

Camille and Martin both shared the impact having their children had not only in their life, but the life of their neurotypical daughter, and their community.  Camille said that over the years they would run into people who knew their children with disabilities and they would always talk about how great they were and the memories they had.

Jenny, one of their daughters, had such an impact on one of their friends.  Martin shared, “One individual who became a great friend to us and to Jenny said Jenny turned her around in how she handled special ed because of the experiences she had with Jenny.”

What about their neurotypical daughter?

Jackie, Camille and Martin’s daughter, is the only child in their family that doesn’t have a disability. Looking back at how their family impacted Jackie, Camille said, “She is such a strong advocate..she’s never seen having siblings with disabilities as something that tied her down..she sticks up for people. If she sees somebody who is mistreating someone with disabilities she sticks up for them and teaches.”

She continued saying, “It has not harmed her in any way.  It’s been a blessing for her and has made her a better person.  People are always telling me how impressed they are with her as a person, both people who know her background and people who don’t.  It’s been a really good experience for her.”