Kecia and Kris: 3 Children with Down Syndrome 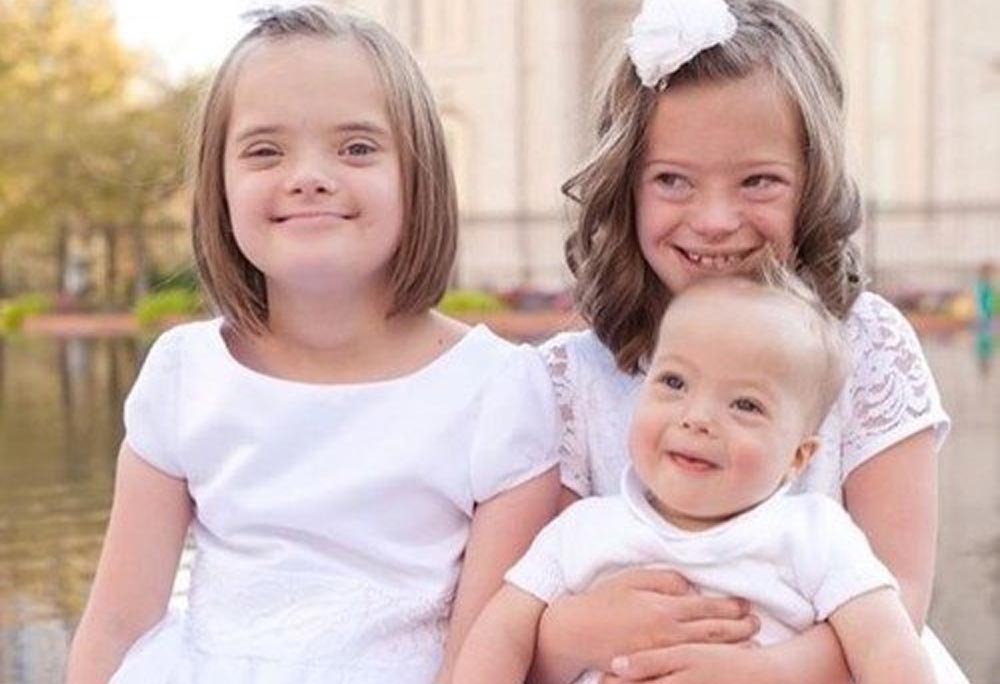 Kecia and Kris were excited for the birth of their third daughter Brie.  When she was born, they discovered that she had Down syndrome.  The news was difficult for Kecia and Kris to process.  10 years later, they have realized how amazing Down syndrome is.  They have adopted two children with Down syndrome from the Ukraine.

Kecia recalled when Brie was born.  She said, “I had her via C-section, and I didn’t think anything of it when they showed her to me.  I didn’t really recognize any differences.” There became a weird vibe in the OR. The doctors and nurses started whispering in the corner and acting strange.

After Kecia was brought into the recovery room, a doctor said, “I think your daughter has Down syndrome.”  Kris said that he knew right away that when he saw Mia that something was different about her. They both became very emotional and fearful for the unknowns.

Everything is Going to be Okay

About 20-hours after Brie was born, Kecia was finally able to see her.  She said, “..I couldn’t see her for a little while, and that whole time I was just scared..I just remember she was in this little incubator and she just wrapped her little finger around mine, and I knew it didn’t matter what she had going on..we were going to be okay.”

She instantly felt like there was something incredibly special about Brie.  It didn’t matter what challenges laid ahead, they were all going to be okay.

For Kris, finding out his daughter had Down syndrome was a little overwhelming.  He wasn’t too familiar about what Down syndrome was and what it meant for her future.  “All I knew is that this was something different and was going to be hard. I remember feeling very scared as a dad, especially worrying about how I was going to protect this little girl.” Kris said.

Communication Can Be Challenging

Both Kecia and Kris agreed that the most challenging thing so far in raising Brie has been communication.  Kecia said that at times it can be frustrating when Brie can’t fully express how she is feeling when she’s had a bad day at school or if she is in pain.

Kris added, “One challenge is not always being able to understand what they need or what they’re wanting or what’s bothering them..some of those times, not knowing what they need is the hardest thing I think.”

The Joys of Having a Child with Down Syndrome

“Brie has always been someone special in our family; she’s kind of the peacemaker of our home.  She’s always had such a sweet and tender spirit..she’s always been the person that calms the mood of the house down.”  Kris said.

Kecia shared a good example of how Brie loves unconditionally.  She said, “When she was little, I had her at the park, and she kept walking up to this group of big, scary-looking guys who were working on the plumbing system, and I was trying to keep her away from them, and she kept insisting on going over there.  She finally got away from me and walked up to this one particular guy and just gave him a hug. He was digging in a hole of dirt and kind of just looked at her, and he got a little bit tenderhearted looking at her..she’s just always had that ability to know that somebody needs that for whatever reason.”

Adopting a Child with Down Syndrome

Brie was a few years old when Kris and Kecia wanted to have more children.  After experiencing three miscarriages, Kecia thought, “What are we supposed to be doing?  Where is our family supposed to be going?” They then turned their thoughts to adoption.  Kecia stumbled across a picture of a little girl from the Ukraine.  Her name was Mia. She was four years old, and like Brie, had Down syndrome.

Kecia said, “Had we not had Brie in our lives, we wouldn’t have had those same connections to this little girl.  We adopted her in 2011 and brought her home.” A week after they came home, Kecia learned that she was pregnant with twin girls.

At 20-weeks pregnant with twin girls, Kecia and Kris learned that the twins had something called twin-to-twin transfusion syndrome.  This meant that one of the twins was living off the other twin’s nutrients. Kecia and Kris went to California to have a life-saving surgery for their twins.

Kecia was then put on bed rest.  She recalled, “Here we had this new little girl from Ukraine trying to figure out what a mom and a dad and family is, and I was put on bed rest for the next five months of that pregnancy.”

Feeling the Need to Adopt Again

“Then last year we thought we were good, we had six girls, two with special needs, and then last year, I started to feel a little bit differently again..Long story short, those feelings led us to another little boy in Ukraine.  He was also given up at birth because of Down syndrome, and when we found him, he was 10 months old.” Kecia said.

This adoption was a little different than Mia’s.  Their son’s birth mom wanted to keep him. However, she was given an ultimatum, choose her son with Down syndrome, or choose her husband and other son.  She decided to give him up for adoption and told Kecia that she prayed everyday that someone would come find him. In the Ukraine, there is no social acceptance for people who have children with disabilities.  They are all either aborted or given to an orphanage. There are no resources or acceptance for people with disabilities.

Children with Down Syndrome Have Great Impact

“I don’t know if we even know the impact that Brie has had on the world.  For us, Brie opened our hearts and minds about what Down syndrome was to the point that we chose Down syndrome two other times.  We chose to adopt Mia and Noah who had Down syndrome.” Kris said.

Both Kecia and Kris know people who have chosen to adopt children with disabilities because they have had the opportunity of knowing Brie and Mia. They have led to the formation of wonderful friendships for Kecia and Kris as well.

Kris shared a touching story that summed up how they feel about having three children with Down syndrome.  He said, “In our old neighborhood, there was a little boy who had Down syndrome who we knew before Brie was born.  We are good friends with their family. He was probably about 16 years old or so when Brie was born.”

He continued saying, “After Brie came home, they came over to visit us one day, and the mom and dad had brought one of their oldest daughters, who was probably in her early 20’s, and when they walked in, she immediately turned to her mom and said, ‘So are you going to tell them? Or do you want me to tell them how lucky they are?’ At the time, we didn’t understand it, but now I think we do.  We understand how lucky we were that Brie came into our lives.”