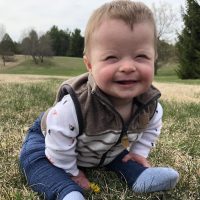 When I was initially told Harvey has markers of down syndrome it felt like someone talking to me after just coming up for air with water still in my ears, the words washed right over me.
The first pediatrician we saw only said we’d have to wait 1 month for genetic testing to confirm or refute. The second one we saw, we asked his opinion and he simply and directly said “yes I think he has down syndrome”. Although shocking to hear, especially because we did prenatal testing that screened negative, at that point we knew without a doubt. It saved us a lot of confusion and plenty of other negative emotions that come with the unknown of this situation over the next month. We were able to accept this unofficial diagnosis immediately and move forward so much faster 💙💛