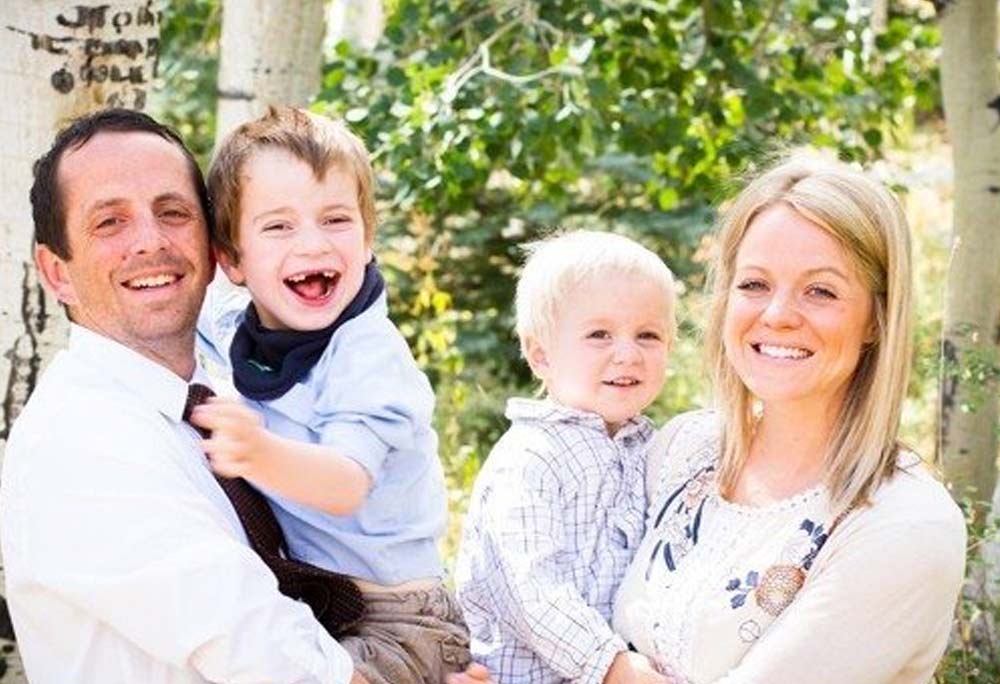 It took almost three years to get an official diagnosis for their son, Smith.  Beth and Bryce shared their journey to getting a diagnosis of Angelman syndrome and how it has impacted their family.

Long Journey Towards a Diagnosis

Unlike several disorders that are noticeable at birth, Beth and Bryce thought their son, Smith, was typical.  Beth recalled that she noticed he wasn’t looking at her. She said, “At around four to six weeks, he still wasn’t looking at me.  We thought maybe it was his eyes, so we got his eyes checked out, and they were fine.”

As time went on, Smith started missing developmental milestones.  He wasn’t crawling, using his hands, talking, and still wasn’t looking at things.  This started Beth and Bryce on a series of appointments with several specialists to try and determine why Smith was falling behind.

Relief From Receiving a Diagnosis

After two and a half years, they finally received the diagnosis of Angelman syndrome.  Bryce said, “We were so elated..finally a microarray analysis of his blood was able to determine what he had..When we found out it was Angelman, we were really excited.”

One of the specialists they saw in their journey for a diagnosis suspected that Smith had muscular dystrophy.  A condition that can greatly affect how long a person lives. They were relieved that Smith had Angelman syndrome.  It meant that he would be able to live a longer life, something his parents were extremely grateful for.

What is Angelman Syndrome?

Angelman syndrome is a genetic disorder that mainly affects the nervous system.  The most common features of the condition are: developmental delay, intellectual disability, severe speech impairment, and problems with movement and balance.

True to the name of the disorder, people with Angelman syndrome are happy and have an excitable demeanor who often smile, and laugh.  Smith is unable to walk, talk, or feed himself. He can roll around, and he can sit up independently.

Losing the Child You Thought You Were Going to Have

Both Bryce and Beth mourned the loss of the life of the child they thought they were going to have.  Beth said, “The hardest thing was kind of just this loss of a dream of having this child who’s going to be walking and talking..it was hard for me to go to playgroups with other moms when they all had these kids who were whining to them and wanting things..I kind of felt a little left out of the normal mom raising.”

Growing up, Bryce described memories he made with his dad.  “I’m a big athlete, and my dad taught me to throw a baseball, and I played all of these sports, and we’d go hiking, fishing, whatever.  Then the realization hits that this is going to be your whole life..and you don’t get the interaction, you don’t even get the ‘I love you dad.’ that for me, was the hardest.”

Changing the way they thought about their life helped Beth and Bryce find joy in raising Smith.  Beth at first would hear people who have children with disabilities say, “I wouldn’t change him for anything.”  She found herself feeling selfish and would think, “I would! If I had the power or ability to change him, I would.”

Now, years later, she has realized as she has gotten to know Smith on a different level, she wouldn’t change who he is.  She said, “..there’s a different relationship you have with someone that can’t talk..what he’s brought to us, and the understanding and enlightenment I’ve had from having a special needs child, is a way bigger education that I could have hope for or dreamed of.  I’m so grateful for it..There’s kind of an honor in taking care of someone who can’t take care of themselves.”

Bryce changed his thinking about his interactions with Smith.  While he used to dream about teaching him sports and how to read or write he said, “Then it turned into well, if he eats the food today and if we can actually get him to go to the bathroom, that is exciting.  When he has a good bowel movement, we are thrilled because we know he’s going to be happier, and he’s going to sleep better. We know he’s at peace, and that’s turned into our joy in a way, seeing him at peace, seeing him comfortable.”

Being a Support When Needed

Beth felt like her greatest help she could provide another family with a similar diagnosis is to “be there to support you..I would assure you that your child is going to be a light in your life, just like any child would be..I would just admonish you to keep going and keep researching and making sure your kids are healthy and happy, and just be a good mother and father to the kids.”

Acknowledging the powerful impact Smith has had on him, Bryce advised, “You’re a beautiful, powerful, amazing human being, and you’ll see how great having this experience will make you in a way.  You will become someone more caring, loving, willing to reach out and willing to take care of.. Your heart just gets bigger, and the joy of life really shines through him.”