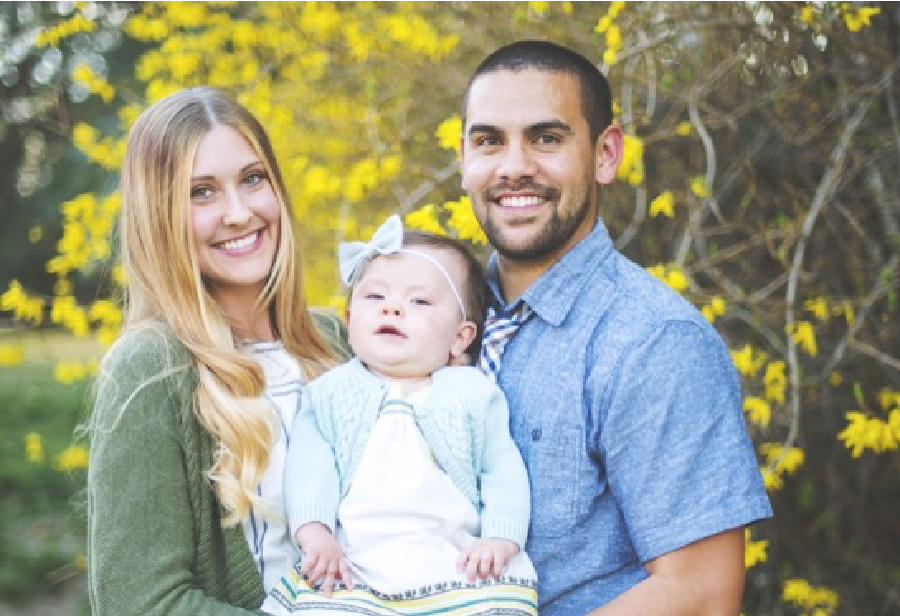 Auni had spinal muscular atrophy or SMA.  A rare fatal disease that is characterized by progressive loss of muscle.  While she only lived for 21 months, her parents remember the joy and happiness she brought to their lives and their community.

The Fog Will Lift

When Auni was around three months old, her parents noticed that something was wrong. They took her in for a physical therapy evaluation. However, along the way, they did their own research and were overwhelmed with what they found.

Their worst fears had come true.  Dallin shared, “We had Googled it, which is a mistake you know.  She was three or four months old and couldn’t really sit up and she couldn’t really support any of her weight..SMA came up and we saw that the statistic was like 90% don’t live like past their second birthday..that was before we had done any testing so we just said alright we’ll just take it as it comes and that ended up being her diagnosis and that was worst case scenario for us had come true.”

The doctor who diagnosed Auni wasn’t too familiar with SMA and referred Caitlin and Dallin to a pulmonologist.  Caitlin recalls, “I just remember driving home and Auni just babbling in her carseat and me and Dallin just silent just sobbing the whole way home.”

SMA is a progressing disease, meaning those affected, lose the ability to control their muscles.  Dallin described Auni’s progression, “I think just seeing her deteriorate, just slowly lose physical things that she could do.  Which we knew that would happen..just to see the actual disease take its toll for her to lose you know one thing after another and to know that’s kind of your timeline.”

He continued by saying, “SMA kids mentally they are unaffected so mentally she was growing like any toddler would and we could have that relationship but her body was breaking down.”

“Her Days are Numbered”

Even though Auni passed away when she was 21 months old, Caitlin said, “She’s so happy and she was so happy through everything and so just being a parent is the most incredible thing ans so losing her, even though it was really hard when she was here just the stress of it all, you’d take it back in one second..just to be able to spend any more time with her.”

Dallin had this to say, “Just knowing that her days are numbered you know and so with that in mind you kind of look at everyday as a gift and everyday that you have you know with them is special..you know we were able to kind of keep that outlook everyday we have her is the best day, just a gift.”

An Abundance of Support

After Auni was diagnosed Caitlin shared what happened within her community.  She said, “It was pretty incredible. I feel like as soon as she was diagnosed our families but also our community of where we grew up, our whole city, everyone just really rallied behind us.  I mean fundraisers were put on weeks or days after she was diagnosed…I feel like she had a really positive impact, I feel like she just brought perspective to ourselves, family and friends just of what’s truly important.

“There is Always Happiness”

Caitlin and Dallin had some great advice for parents who had a similar diagnosis.  Caitlin shared, “I would first say it gets better, the fog lifts and you find a new normal.  Even in the process there is always happiness you know what I mean, you can find joy in everyday.  It’s just noticing it and it’s usually in the small things even if it’s just a simple walk with Auni going to the park and laying on a blanket…you’ll kind of find your new groove and experience happiness even if it’s going to be so hard but worth it always.”

Dallin shared his advice, “I would say to get the information, medical care information from your doctors and I would reach out and talk to other families.”

“We Wouldn’t Change a Thing”

“Going through it all it was so hard, we’ve learned a ton and we’ve grown a lot.  But we wouldn’t change a thing, that’s the craziest part. Through it all, even losing her we’d want her back in like two seconds if you could, but the people we are today it’s because we had Auni and went through all we did.”  Caitlin said.