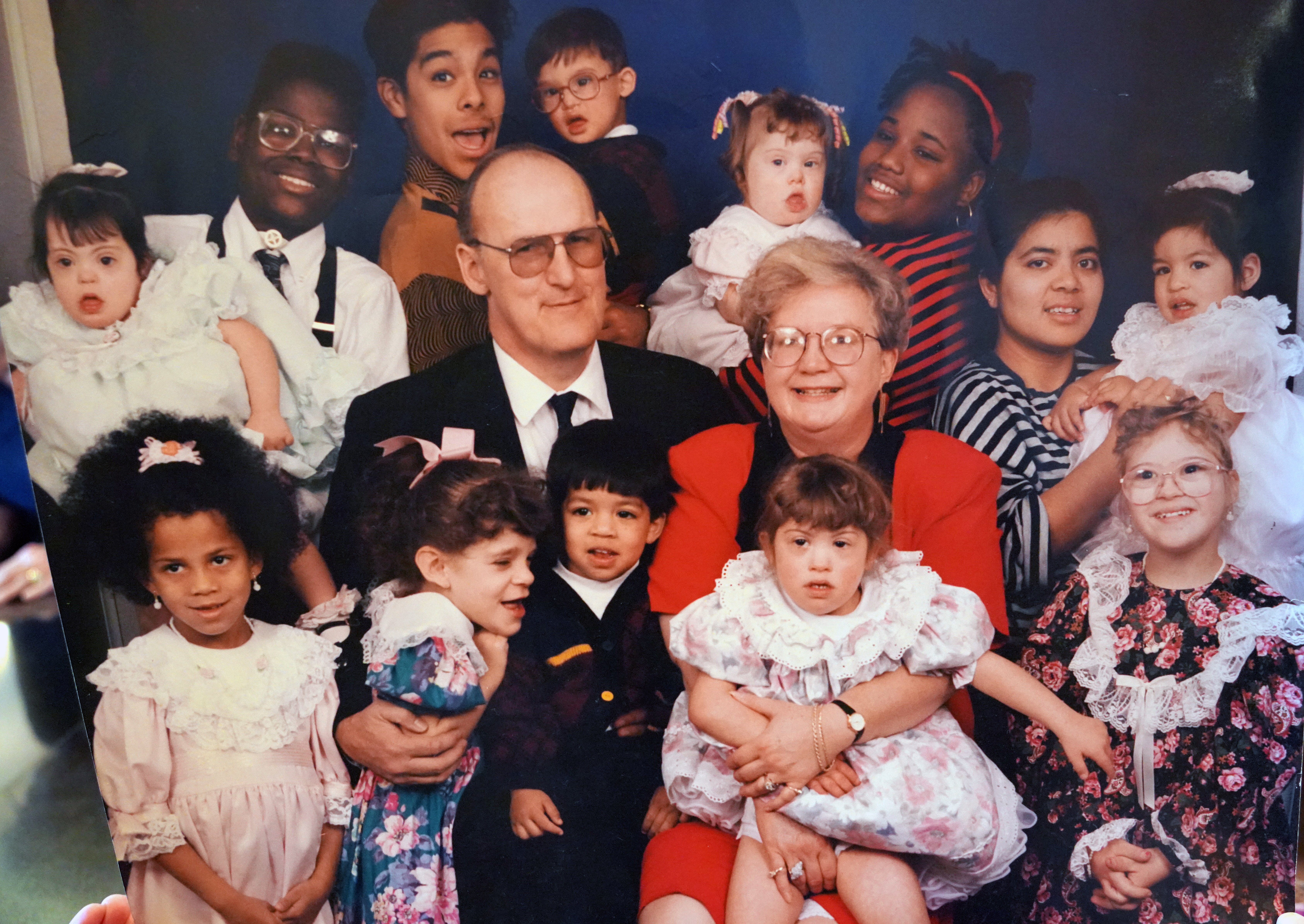 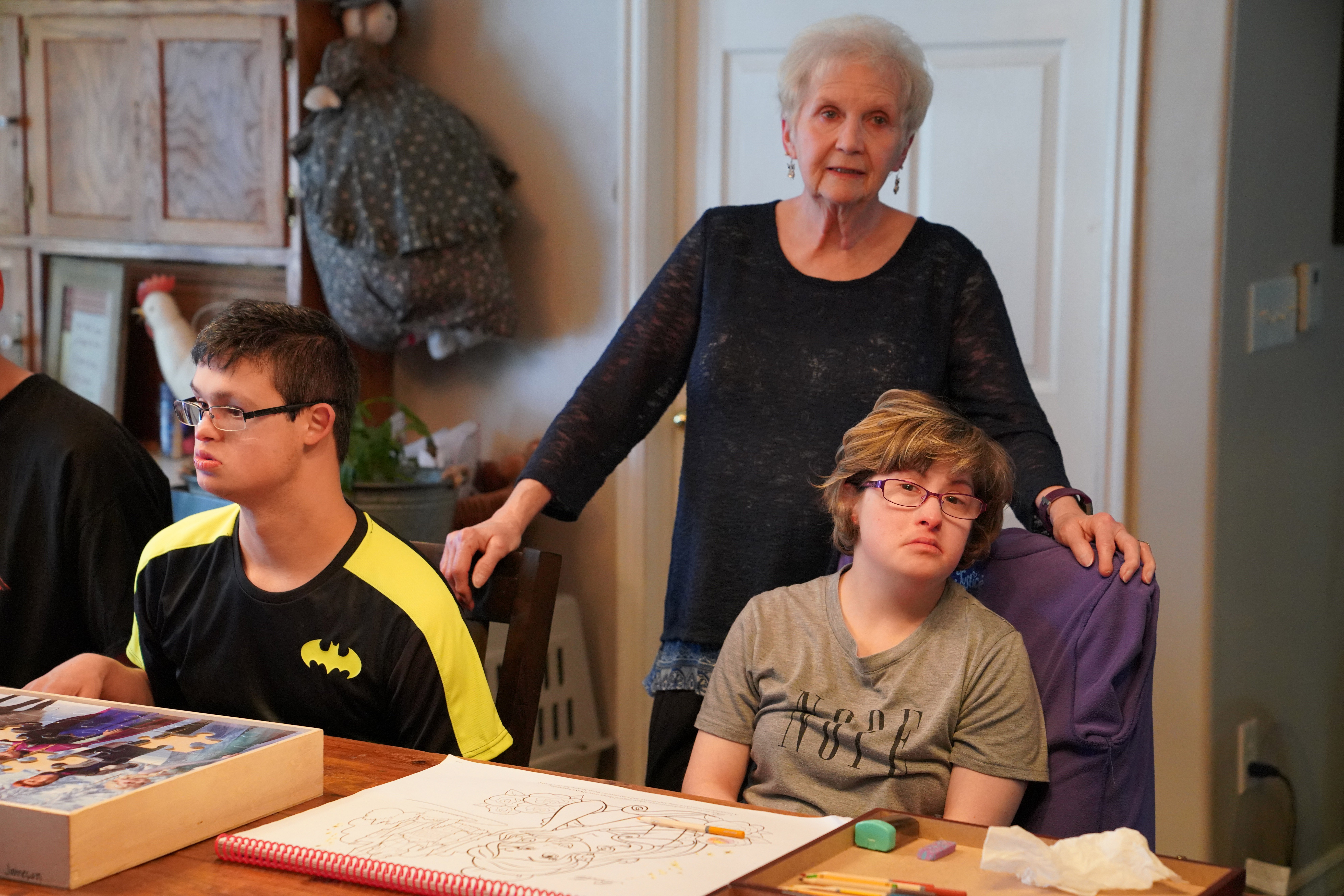 Christie and her husband have adopted 35 children, 26 of them have had disabilities. Christie never thought about adopting a child with disabilities.  The thought of doing that frightened her. That all changed when she found a local ad a couple had placed, searching for someone to adopt their child with Down syndrome.

After contacting the couple, Christie and her husband were told they decided to keep their baby but asked if they could keep their contact information.  The couple ended up writing a letter to every hospital in Pheonix and surrounding area saying there was a family who would be willing to adopt a baby with Down syndrome.  A short time later, Christie received a call from a hospital and that was the start of their adoption journey.

They have adopted children with a wide range of disabilities, including ten with Down syndrome (four have passed), spina bifida, Angelman syndrome, Sotos syndrome, abused children, drug-addicted babies, and synovial sarcoma.  With all these disabilities, Christie admits, “I’m not going to tell you we don’t have problems.”

The Biggest Challenge When Adopting Children with Disabilities

“Like any baby, you fall in love with them instantly.”Christie and her husband only adopted “medically fragile” babies, which means several of their children have passed away. Losing a child is one of the hardest things to endure. “The pain is horrid,” Christie says, “but we wouldn’t have missed the time with our babies for anything.”

Christie’s husband passed away nine years ago. Remarkably, she said her life hasn’t been too hard without him because she has eleven children that give her a reason to get up in the morning. What’s better, she can laugh with ALL of them.

If You are Thinking about Adopting a Child with Disabilities…

When your child is first diagnosed with a disability, doctors tell you the things they will never be able to do. It is a great feeling, however, seeing your child do things the doctors never thought possible. In those moments, you call everyone you are close with to share the milestones your child has reached. In some way, “every day is like a miracle”.

Once you’ve had a child with disabilities in your home, you will find you want another one because “it truly is like a piece of heaven in your home”.

Christie told the story of a crying woman she saw outside of a doctor’s office. The woman had a daughter with Down’s syndrome and she wanted another child with Down’s syndrome but doctors told her it was very unlikely she would give birth to another one. Christie was able to help her find and adopt another baby with Down’s syndrome. THAT is how much joy children with disabilities bring to a home.

Don’t Embark on this Journey Alone

When they discovered Christie’s husband’s condition was terminal, they determined she would need additional help.  A doctor suggested acquiring services from a nursing facility to come to the home and do daily care. A woman comes to Christie’s home every day to help with bathing, doing hair, and brushing teeth. Christie says with pride, “My children may have difficulties, but we have no cavities.”

Three days a week, a friend comes to the house for two to four hours to help with schoolwork.  They do schooling all the time. Children with Down syndrome tend to forget things they’ve learned so parents must reinforce what the children have learned.

You Can Live a Normal Life with a Child with Disabilities

Having children in wheelchairs, wearing diapers, having G-tubes, or using oxygen, this family keeps busy. Three times a week they go to the gym and participate in classes or activities. They serve their church by doing volunteer work once a week. In the fall and spring, they play on a softball team where Christie is the head coach. This family will even go to movies or out to eat.

Christie has lost thirteen children, most of them were terminal at birth, but that doesn’t mean you can’t live your life or do enjoyable things as a family. She claims, “they impact every moment of every day for me” and she sees each day as a miracle.