Valerie and David: Down Syndrome 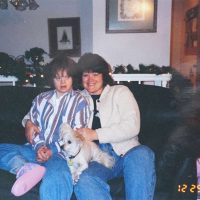 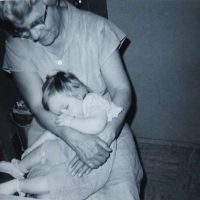 Typical of that time era, David and his wife were encouraged to place their daughter, Sharmi, who had Down syndrome in a state institution.  They chose to keep Sharmi at home. A decision David is grateful for. Sharmi’s sister, Valerie, eventually became her guardian. Valerie recalled what a joy it was to have Sharmi in her life.

Choosing to Keep Her Home

Sharmi’s mom replied, “No, she’s my daughter; I want to take care of her.”  That is just what they did. They helped Sharmi learn basic life skills, and helped her accomplish things the doctors said she never would.

Valerie is one of Sharmi’s siblings.  She loved participating in helping take care of Sharmi.  She said, “She was our baby sister, and what little girl doesn’t want to help with a baby in the family?..We all helped take care of her, and we spent a lot of our playtime, especially when we were younger, playing with Sharmi.”

It was through all of this playtime that Sharmi learned how to walk.  David talks about how his children would lay on the floor and take Sharmi’s feet and walk her around the house.

Both David and Valerie lovingly recalled how Sharmi was very particular with the way things were done.  Valerie shared, “We would have popcorn on a Sunday night and watch ‘The Wonderful World of Disney’. If Dad hadn’t got the popcorn popper out by then to start popping popcorn, she would get the popcorn popper out; she knew the routine.”

David explained that he would purposely not put the popcorn popper out.  He said, “She’d go get it out of the drawer, set it on the counter with the popcorn and stand back.  She wouldn’t speak; she’d just look at you like, ‘Come on, let’s get going.’”

Moving to a group home

When all of Sharmi’s siblings moved out, Sharmi became lonely.  It was at this point that they decided to place her in a group home where she could interact with other women who had developmental disabilities.

Valerie was able to visit Sharmi often and would take her home with her on the weekends.  “I was married, and my children were very accepting of Sharmi.” Valerie said.

Admiration for sibling with Down syndrome

Valerie recalls all the time she was able to spend with Sharmi.  She was able to learn many qualities that Valerie admires. She shared, “They are completely without guile.  They love everyone and they’re continually positive.”

She continued saying, “They overlook all of your flaws, and it’s like a spirit surrounds them.  We always felt like she had an extremely positive impact on our family. I realized what a wonderful person she was and for the opportunity to have this wonderful person in your life, and to share her with your friends.”

Alzheimer’s and people with Down syndrome

When Sharmi was 40 years old, she started showing signs that she had Alzheimer’s.  Valerie said, “It was slow and progressive..I started visiting her more at the home rather than bringing her home.  She still knew who I was; she still responded when I would come.”

Sharmi started having seizures.  She also had poor circulation on her feet, this caused blisters to form.  The last five years of her life, she was in a wheelchair. The side effects of her seizure medication and the brain dysfunction from Alzheimer’s made it so Sharmi couldn’t interact and respond like she used to.

Valerie shared her experience when Sharmi passed away.  She said, “You didn’t want her to go, but at the same time you did, because you knew that she was suffering and could no longer participate in the world..she passed away very quietly and peacefully, which is what we wanted for her.  I don’t think you could ever go wrong when you serve somebody, and Sharmi would do anything for anybody that she could.”