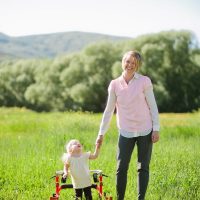 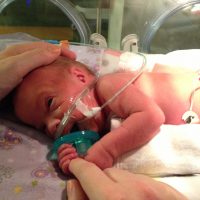 Piper is a vivacious little girl with spina bifida.  She surpassed the doctors’ expectations even before she was born in an in utero surgery.

High-Risk Surgery Before She Was Born

“I Had a Feeling that Something Wasn’t Right”

During her 16 week ultrasound, Nicole noticed the technician acting cautious.  She said, “During the ultrasound, the technician was asking me a lot of questions about my health.  It seemed like she was taking a lot of pictures of the fetus..she said ‘you need to need with the doctor.  She needs to go over your results.’ My mind just immediately went to the worst situation that something wasn’t right.”

The doctor then informed Nicole that her daughter had Spina Bifida.  He discussed a few options of what to do next but ultimately referred Nicole to a perinatologist.

Not really knowing what an in utero surgery entailed, Nicole further researched it.  She said, “It was something very hard for me to wrap my brain around, having surgery while you’re pregnant and then staying pregnant…I thought about that and talked with family members and friends, trying to get any information from anyone who had heard about this and I look it up online, Googling it.”

After talking with a nurse and getting many questions answered, Nicole made the brave decision to have the in utero surgery.

The Results of Having Surgery While Pregnant

Having such a high risk surgery, there were only three hospitals in the country that offered in utero surgery.  “The results were better than I’d hoped for..she had a reversal in her brain malformation. She has surpassed all of her doctors’ expectations.  Regarding her mobility, we were told best-case scenario was that she would use a walker or braces to walk for the rest of her life, and not she’s running and walking without any assistive devices.”

Even though Piper has excelled because of the surgery, Nicole experienced some complications after.  “Surgery went well, but the healing afterwards did not. I was in the hospital for about six weeks until she was born in an emergency c-section.”  Nicole stated.

The Challenges of Finding a New Norm

Nicole described finding a new norm was part of the challenges she now faces.  She explained, “It has been difficult accepting that our norm is different. It has been difficult to not wish it were different for us.  It’s difficult knowing that we will be different from her peers and from her siblings, and that she will have challenges that other kids won’t.  It’s difficult knowing that I can’t control a lot of that..I want to teach her to embrace who she is and embrace her strengths.”

Dating Someone Who has a Child with a Disability

Nicole was lucky to find Adam when Piper was three years old.  Adam had this to say about Piper, “She’s just so easy to fall in love with; she has such a personality. It wasn’t really difficult.  If you understand the expectations, there is so much upside to it.”

Adam’s other children were nothing but welcoming to Piper and Nicole.  Adam explained the impact having Piper in their family has had on his biological children, “It’s like the light.  That’s the only thing they talk about…when they are at their mom’s house, they talk about Piper all the time. It’s remarkable the impact that one person can have.”

“Her Quality of Life is Going to be Just as Great.”

The decision to choose life can be difficult when filled with uncertainty.  Nicole said, “I would say to seek as much information as you can..I thought that from what I’ve been told and from what I’ve learned about Spina Bifida, her quality of life is going to be just as great.  That was one thing that drove my decision to keep the child and to have in utero surgery, and I’ve been so grateful that I did.”

“If you choose to do this surgery, it will take a toll on you mentally and physically…so it was really challenging.  I feel like I made the best decision. I’m grateful for what her doctors did for her and what they did for me.” Nicole said.