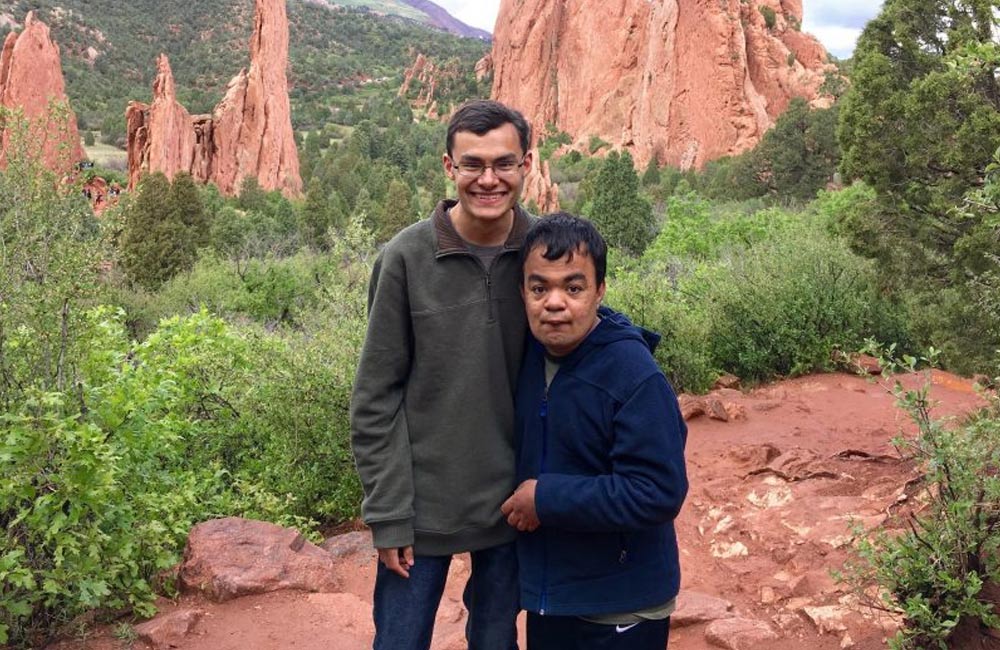 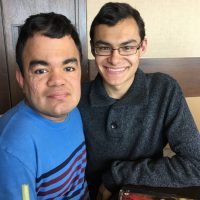 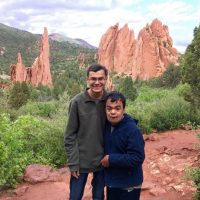 Nathan has a twin brother, Nick, who has MPS or mucopolysaccharidoses, type 2. He shares his story as a sibling with a brother who has a disability.

“My brother Nick has something called MPS or mucopolysaccharidoses, type 2. MPS is a lysosomal storage disorder, a genetic condition that only affects boys,” said Nathan. Nick is missing an enzyme that breaks down sugars in his body. This affects the nervous system, heart and all other systems in his body. “Nick is 19, is non-verbal and at the function level of about a five-year old,” said Nathan.

Growing up in a hospital

“My brother had two bone marrow transplants when he was around the age of three, so growing up, it was complicated,” said Nathan. “I pretty much lived at the hospital.” Nathan realized his brother was different about this time. “He required more care than other people and more attention, so I would say around the age of three was when I realized something was different,” said Nathan.

It was hard for Nathan to understand as a young child why his brother didn’t talk. “He would sometimes say words or noises that sounded like animal noises, and that was confusing to me, especially when I was very little,” said Nathan.

Another difficult thing for Nathan was explaining to his friends why his brother was different. Nick and Nathan went to different schools and sometimes Nathan would have friends from school visit him. “My friends would see my brother for the first time and would be curious as to why he didn’t talk. When I didn’t really even know that answer, it was difficult trying to explain that to my friends,” said Nathan.

Going out in public was difficult

“The other thing that was also difficult was the staring, that was a huge challenge,” said Nathan. “Whenever we went out in public, people would stare at my brother. He would be in a handicapped stroller, kind of like a wheelchair or a huge chair, so many people would look.” Nathan struggled to understand why people would be looking at his family and wanted to be more private.

“It wasn’t until recently that I realized they were staring because they were curious,” Nathan said. “They were not judging my brother, they just wanted to know more. That was challenging, and it took a long time to get to that place of acceptance.”

Meeting other people who have siblings with disabilities really helped

Nathan struggled as a child to understand the public’s reaction to his brother. “I think meeting other people in the support group and meeting other siblings of other family members was what really helped me to get to that place of acceptance,” said Nathan. “Reading their stories online was really helpful, but as a little kid, it was hard to understand.”

Communication helped sibling not to feel left out

When Nick was three years old and receiving his bone marrow transplant Nathan rarely saw his parents. “My parents couldn’t spend much time with me because they had to help my brother,” said Nathan. “I spent most of my days with my grandparents.”

Later, during other surgeries that Nick had, Nathan didn’t see much of his family. “I think what helped me was that my parents made a huge effort to share with me what was going on with my brother,” Nathan said. “That helped me to realize that I wasn’t alone. I understood what my brother was going through.”

Nick’s health care providers were also supportive and encouraging of Nathan’s experience as well by keeping him up to date on treatments and giving him information. “If my parents and the health care providers had not kept me involved, I think I would have felt very alone, so it was helpful that I knew what was going on at that time.”

Siblings With a Mission

Nathan’s experience with his brother has influenced him greatly. He has started an international support group called Siblings With A Mission that offers support to siblings and family members of those who have developmental disabilities. “We have an online story column where siblings and families can share their experiences and share their stories about what it’s like…to love with someone who has a disability,” said Nathan. “The main reason I started this was because the sibling experience was so unique, and not many people know what it’s like.”

Advice he would give to others on the sibling journey

Nathan advises other siblings to be curious and learn as much as possible about your sibling’s condition. “As a sibling, you have a very unique experience. Not many people have the opportunity to understand disability by having a brother or sister with one,” said Nathan. He suggests using the internet as an information source as well as your sibling’s health care providers. “That will help you understand the situation,” said Nathan. “Be curious, ask questions and ask your parents what’s going on, and if for any reason you don’t get those answers, keep trying.”

“For parents, I would say just keep in mind how unique the sibling experience is. It’s a special experience that can be very challenging at times, especially since siblings can feel alone. So, as a parent, try to keep the non-disabled sibling involved as much as possible,” said Nathan. “It might also help to look up online about the sibling experience just so you can be aware of some of the emotions they are going through.”

Some last advice he has for siblings is to, “Enjoy that experience and make the most of it,” Nathan said. “Read and share your stories, just know how your story can make a difference.”