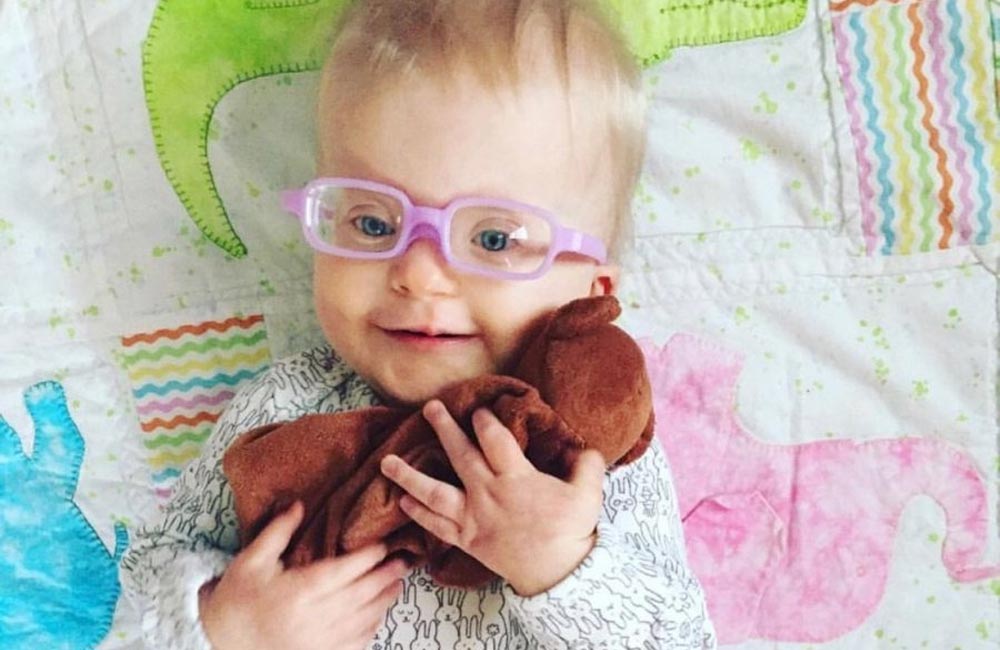 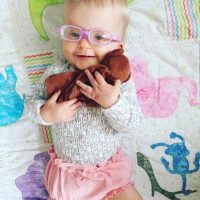 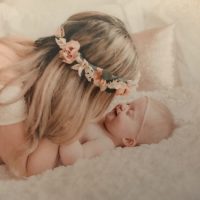 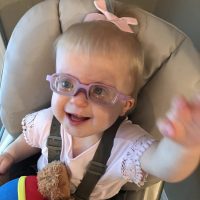 When Kim was 18 weeks pregnant, the doctors discovered some abnormalities with Jackie, her baby. After Jackie was born, it was discovered that she has CHARGE syndrome.  Despite enduring six major surgeries before reaching age two, Jackie has brought joy and love to Kim’s life.

Discovering more than the gender at an ultrasound

Kim went to her 18 week ultrasound expecting to find the gender of her baby.  It was there that doctors informed her there were some abnormalities. Kim recalled, “They saw that she had what they thought was a cleft lip and something wrong with her heart.”

They were referred to a high-risk OB who monitored them closely until Jackie was born.  For the first six weeks of her life, Jackie was in the NICU. During that time, Kim was told about the possible diagnosis of CHARGE syndrome.  Even though Kim is a nurse, she had never heard of it before. She said, “They ordered an exam of her eyes and ultrasound of her brain plus hearing tests, all of which were common problems in CHARGE.”

Jackie had an optic nerve lipoma in both eyes, which could lead to blindness.  She is profoundly deaf in one ear and has mild hearing loss in the other, she has a heart defect and had a cleft lip and cleft palate.  Kim said, “They learned she had hip dysplasia on her right side. We’re not sure if that’s related to the CHARGE of if that is kind of icing on the cake, but it felt like there were lots of hits back to back.”

What is CHARGE syndrome?

CHARGE syndrome is considered to be a very complex syndrome that involves several different systems of the body.  Each person is unique in the degree that each system is affected.

Jackie was officially diagnosed with CHARGE when she was three months old. Kim said, “These kids are all unique, and you just don’t know where your child is going to fall on the spectrum, so it is scary..we just had to wait and see how she develops and what problems she has.”

Information can be overwhelming

Kim said that one of the hardest things they have had to deal with, is the amount of information they were given at the first.  She said, “Obviously it was hard to digest all of that information at one time. She has the vision impairment..We’re trying to digest that, then someone comes in and tells us that she’s deaf and partially deaf.  It was very, very difficult to digest all of that.”

While they were waiting for the results to confirm Jackie’s diagnosis, they were given a booklet called, ‘This is CHARGE’ and were advised to stay off of Google.  Something Kim said, “..so of course that’s the first thing you want to do, and you do freak out because it’s very intense and extreme.”

Before they left the NICU, Kim said that she had a conference with the medical providers that were helping with Jackie.  She said, “I felt like I had all of this information kind of thrown at me and was trying to digest it as a new post-partum mom ..I felt like they were throwing this information at me but not supporting me or comforting me and telling me that it was going to be okay.”

Finding joy in the journey

At 19-months-old, Jackie has faced six major surgeries.  Kim said, “Let’s see what we can do to make her the best she can be.  Seeing how she is now is just amazing. You would never look at her and think she has to deal with all of these challenges.  She is happy and sweet and really funny, and her personality is starting to come out..her ability to learn and understand things is better than we could have fathomed, so she’s brought lots of joy.”

Having Jackie in her life, Kim has a new outlook.  She said, “Honestly it has been a really big blessing, and it has changed the way we view the world.  It has put a positive light on everything and makes you realize what matters and what doesn’t, to let the silly things go because life is very precious.”

The best advice Kim could offer for a new parent was, “It’s going to take time to accept everything you are facing because it’s very hard, and there’s no sugar coating it.  It is very, very challenging for everybody involved, but hang in there and treat your child as you would any other child.”

She continues, “No matter what happens, you’re going to be amazed by them.  We are amazed by Jackie every single day, the things she can do and the fight she has.,  Just hang in there because it does get better, and it will change your life for the better.  In the end, it really is a huge blessing to our family, and we wouldn’t change it at all.”