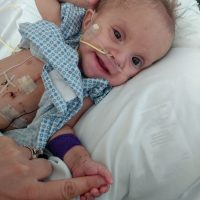 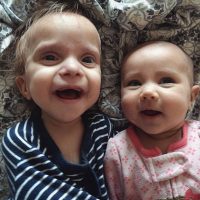 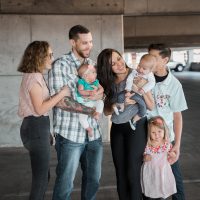 Kenai is truly one of a kind.  With only a handful of people in the world diagnosed with 7Q deletion, he is paving the way and proving doctors wrong.  His parents, Kassy and Darren, share what a joy he’s been to their family and how they are helping him grow and learn.

Even though Kenai was born five weeks early and weighed only three pounds, his parents had no reason to believe he would be anything but typical.  However, when he was less than 24 hours old, a nurse told his mom Kassy that there was something wrong with her baby.

Kassy said “..by day five of life they told us it was a deletion on the seventh chromosome, there are about 34 reported cases that are similar but not exact to his.”  Having a diagnosis so rare meant doctors had to guess what would happen next with Kenai.

“They didn’t really know what he would do; if he’d smile or anything..he was so tiny when we got his diagnosis.  I googled it and all of the results were bad. All of the cases were bad and scary and it took me a while to just breathe and not try to search who he would be, and just watch him develop. That was kind of a hard hump to get over.”

When Kassy and Darren told their families about Kenai’s diagnosis they received a variety of reactions.  Darren said, “My family is kind of dramatic. When we first brought the news to them a lot of them were really taken back and automatically sent things into worse case scenarios…maybe they were scared for us but we never felt that way.”

“Their initial reactions would be ‘I’m so sorry’ and I just had to say ‘Don’t say sorry, we’re still excited and we still just had a baby and we still love him so much.’” recalled Kassy.

Words of Advice: Don’t Use Google

“Do not Google anything ever.  Don’t take your doctor’s word for it because they don’t know everything, they can predict all they want but no one’s going to tell you what your baby is going to do until your baby tell you what they are capable of.  You just need to wait, it’s hard to accept but you need to trust the process and trust your journey.” This is what Kassy had to say when asked to share some advice for parents.

Darren added, “Positivity is a big deal for us.  You really attract what you think about, that’s why I’ve commented so much about him being this positive entity in our home.  There’s a lot of positive stuff that can come from this, I would just say concentrate and focus 100% on all of the positive things and build off that.”