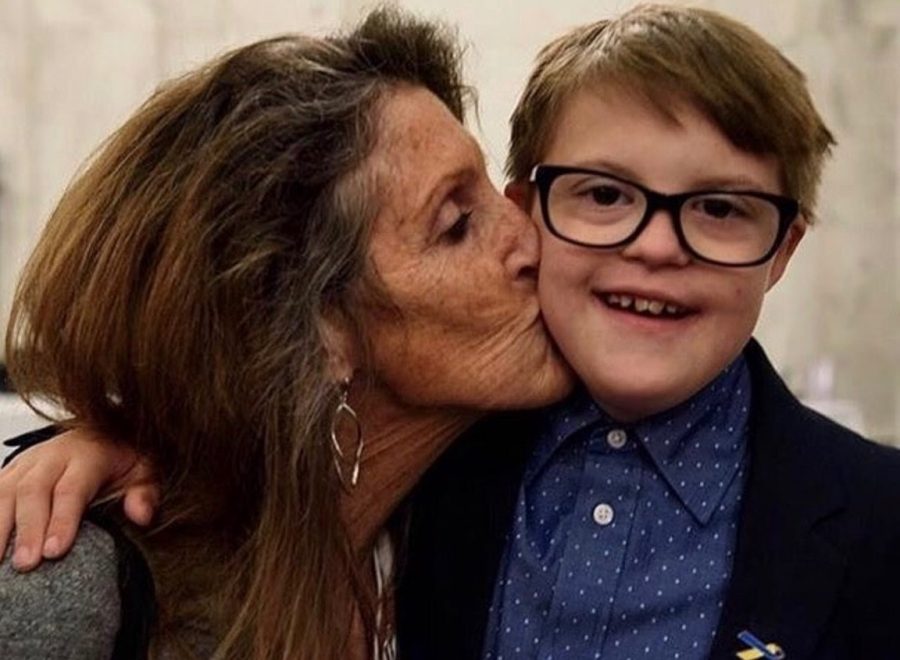 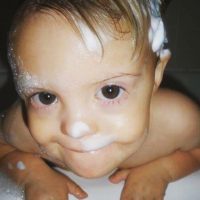 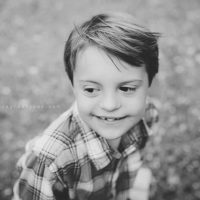 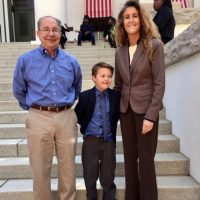 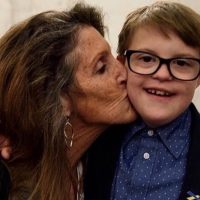 Karen and her husband were surprised to learn that their son, Caleb, was born with Down syndrome. Even more surprising, Caleb had two heart defects, something sonograms hadn’t picked up on.  Karen has since become an advocate for people with disabilities and is grateful she has Caleb in her life.

Happiness That Comes From Down Syndrome

Older parents have child with Down syndrome

“We were both older when we got pregnant; I was 44 and my husband was 50, and as a result of that, we were referred to a high-risk obstetrician.”  said Karen. They were monitored closely and received monthly sonograms.

Caleb has been lucky so far.  Despite having two heart defects, he has yet to have surgery to fix those.  One of the heart defects was able to close on its own and the other is still open and being monitored by a cardiologist.

In order to help Caleb reach his full potential Karen said they are, “..realizing his limitations and how we can bridge that gap into making him the most successful version of himself.”

One challenging thing they face as a family is the general population’s perception of what someone with a disability is capable of.  Karen said, “..trying to balance his abilities with his strengths to show the world that our folks can do pretty much anything with some accommodations.”

Down syndrome brings gentleness into their lives

Karen was recently asked if she had a choice to change Caleb or to take away the Down syndrome if she would.  Her response was, “Absolutely not!”. Caleb has been such a blessing in her life.

She attributes Caleb to helping broaden her perspective of the world.  She said, “The world is bigger than what it was previously. We see people in a different light. I think we are more accepting of other people..there is a gentleness that he brings to our living that we probably didn’t have before.”

Impact one person can have on the world

Caleb has had an impact on more than just his parents.  Caleb has a sister who is 17 years older than him. After he was born, she chose to go into special education.  She currently teaches other children who have a disability.

For Karen, the impact of Caleb is being felt far and wide.  Karen is heavily involved in advocacy groups for people with disabilities.  She said, “..he absolutely changed my life and my work life. I started working in the disability field shortly after he was born.”

As part of her work with the Down Syndrome Association, Karen gets asked frequently for pieces of advice for parents who have a recent diagnosis of Down syndrome. She responds, “..my advice is to first take a deep breath because I know how scary it is.  It’s a new world, and you’re not used to it.”

Another great piece of advice she gave was to find other families who have a child with Down syndrome. Find groups where you can meet and interact with children with Down syndrome.  It will help parents look ahead in the future and get a better perspective on how to raise their child.

Having an open mind towards disabilities

Karen had great parting words to keep in mind.  She said, “I would just like people to open their minds to the possibility of people with disabilities.  People with Down syndrome, people with autism, or other people with any real disability and make sure that they are looking at them through the lens of capabilities and abilities instead of disabilities.”