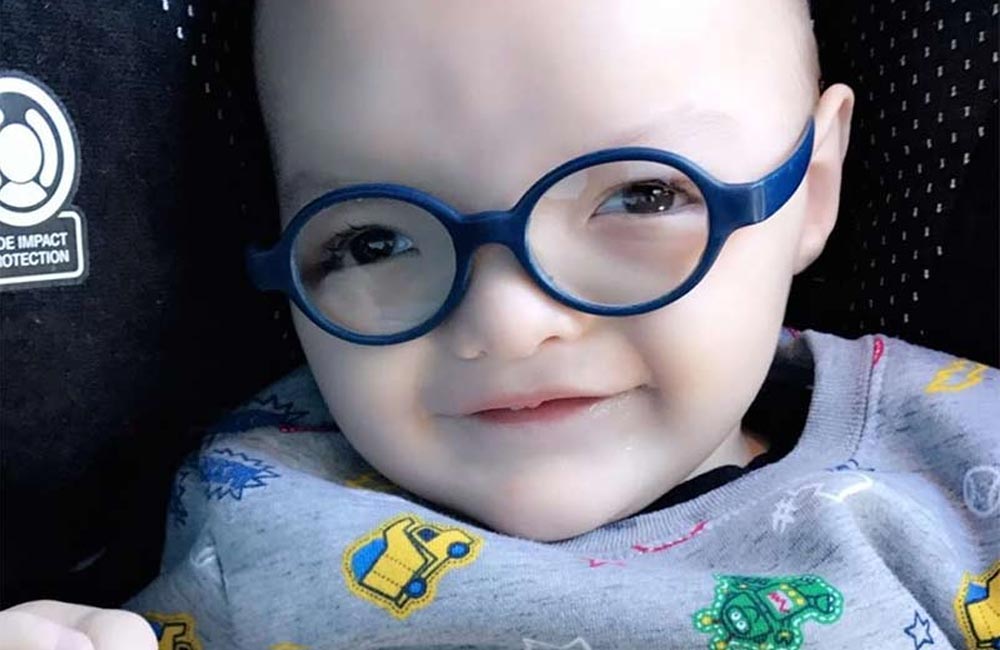 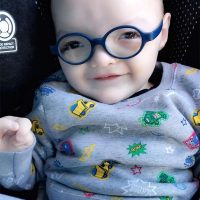 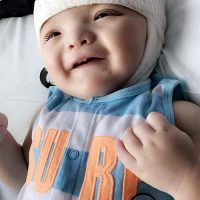 Shortly after Mason was born, Kaitlin was told by doctors that he had “dysmorphic features.” Mason’s main diagnosis is a deletion of two separate chromosomes. He also has complications such as a congenital heart defect, congestive heart failure, microcephaly, auditory neuropathy, and many others. Despite the challenges, he is the light of his family’s life.

Living With an Unofficial Diagnosis

Mason is a medically complex 20-month old.  Despite all his diagnoses and difficulties, Kaitlin says, “Nothing has held him back from being the happiest child.”  His happiness is contagious to anyone who interacts with him.

One of the people most affected by Mason’s condition is his brother. “I’ve never seen his older brother so loving and so happy until Mason came into his life,” said Kaitlin.  Matthew is always quick to introduce his brother, Mason to his friends and always holds his hand. Kaitlin is so grateful for the love her boys share.

Their extended families have been supportive from the day Mason was born.  Kaitlin’s mom is the only one, other than her husband, who can watch Mason, which Kaitlin says, is a Godsend.

There are some family members who haven’t truly understood Mason’s diagnoses.  They believed once Mason hit a certain milestone, he would function more normally.  It has taken time for them to realize that will never be the case. Instead, they are learning how to better support Kaitlin and her family.

On top of extended family support, Matthew’s school has done fundraisers and Christmas parties to give back to the hospital that’s helped Mason throughout his life.  Kaitlin says the kindness and generosity at fundraising events are “emotionally overwhelming” and she is grateful for their help.

Complications of parenting a child with a chromosome deletion

Kaitlin and her husband have not slept in the same bed since Mason was born. Mason has heart failure, doctors said it was likely he could stop breathing during the night. The thought terrified Kaitlin so she sleeps on the couch by Mason’s bassinet every night.  She has woken up many times to him not breathing. It is a sacrifice and a struggle but Kaitlin and her husband are willing to do it.

“It’s a full-time job between calling insurance companies and making sure my son is getting what he needs,” said Kaitlin.  Even though he has a genetic disorder, chromosome deletion, Mason hasn’t been given a specific diagnosis.  This makes it hard for specialists and insurance companies to determine what medical equipment Mason needs to have. Despite all the struggles, Kaitlin said, “…all the positives really outweigh all the negatives.”

On his 11th chromosome, one of the deletions is a whole gene deletion called the SDHD gene. This deletion increases Mason’s chances of hereditary cancer.  Unfortunately, cancer runs in Kaitlin’s family. The possibility that Mason will more than likely have to deal with cancer at some point in his life is reality daunting.  He has endured so much already, but Kaitlin is confident they will find their way through.

“That is your child and you will do everything for them”

Don’t shy away from asking questions.  Kaitlin says, “You are your child’s voice,” you need to be the one to stand up for them.  If medical professionals can’t give you the answers you want, find a support group of fellow parents.  Kaitlin wished she had taken advantage of this sooner than she did. She was never turned away when she had questions for other families in similar situations.

Don’t doubt your strength and abilities.  Many people have said to Kaitlin and her husband, “I don’t know how you do all this!  I would never be able to!” Their response is always, “Yes you can. That is your child and you will do everything for them.”