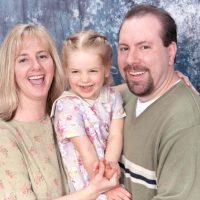 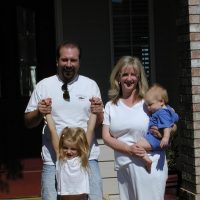 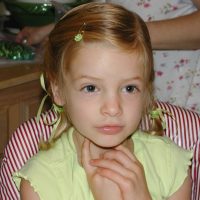 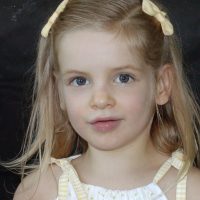 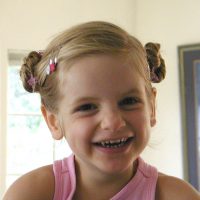 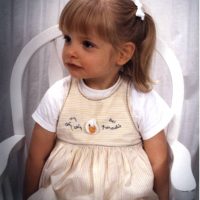 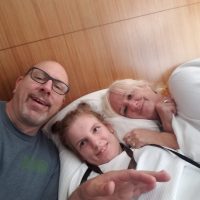 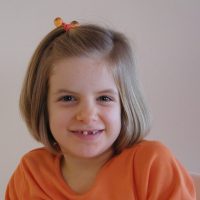 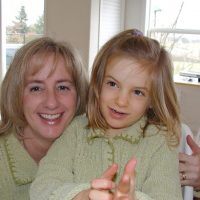 Christie and Eric noticed their daughter wasn’t meeting expected milestones and at 5 months, Elie was diagnosed with infantile spasms which is a seizure disorder, resulting in developmental delays and intellectual disability.

Elie was 3 months old when Christie and Eric noticed she was making some odd movements. They mentioned their concerns to their pediatrician who told them that, at 6 months if she was still wasn’t achieving age appropriate development, he would send them to a neurologist.

When Elie was 5 months old, Eric and Christie decided they couldn’t wait any longer to see a neurologist. As soon as the neurologist saw Elie, he knew she had a serious condition and soon after diagnosed Elie with infantile spasms, which is considered a medically catastrophic seizure disorder.

Christie felt a little more comfortable with the diagnosis and the medical issues involved, she has a cousin with a developmental disability and she once wanted to be a nurse. Christie had wanted a daughter for a very long time, and because of the disability she went right into the momma bear mode. “Okay, what do we need to know? What’s next on the road?”

A different kind of seizure disorder

Infantile Spasms is an unusual seizure disorder because the child will stop having the specific related seizures at a young age but if it’s not controlled it moves into another seizure type. It turns out that Elie was having about 200 seizures a day and she qualified for a study being done by UCLA and was immediately enrolled in the study. Christie said it was great to have the level of care and oversight offered by the doctors doing the study.

Christie also started doing research on her own and found that vitamin B6 could help control seizures and when the other treatments didn’t work the doctors finally agreed to try the vitamin B6 treatment. “Within three days her seizures were gone,” Christie said. “Unfortunately, they went on for too long,” and a serious developmental disability resulted.

“The first two or three years was, I think a very similar experience to other parents,” said Eric. Elie was nonverbal but she toddled after other children her age and she had fun playing. “But the older she became the more distant she became from her peers,” said Eric. They had great support from friends and family, but as they interacted with friends it was also a reminder of the differences in Elie from other children her age. “It was very challenging, we had lots of therapies, we got her right into occupational therapy and speech therapy,” Eric said. ” Lots of medical appointments, metabolic studies, we were doing stuff at UCLA and USC Children’s Hospital all the time, it seemed like.” Their days were full of the logistics and caring for Elie.

Becoming an advocate for their daughter

“I always felt like I had to be Elie’s voice,” she said. Christie became an expert on Infantile Spasms by doing a lot of research. They were living in California at the time and qualified for speech, occupational and physical therapy twice a week. Elie was three when she had her first IEP (Individual Educational Plan). “I think for me the most difficult thing has been all of the advocacy. The difficulties with state agencies with various people and committees,” Eric said. “We’d have to work with and sometimes against (these committees) unfortunately to get Elie’s needs met.”

As she got older Elie was diagnosed with autism. Christie said, “it was actually a very helpful diagnosis because it helped us to understand her communication.” They learned to communicate with her through pictures.

Developed Self-Injury at an Early Age

Elie developed severe self-injury behaviors when she was about 9 years old. She would cycle in and out of the behavior but at age 11 she cycled in and never came out of it. This led to admission to the Kennedy Krieger Institute’s inpatient neuro behavioral unit on two different admissions, the first time for 5 months and the second time for 7 months. “It’s a unit that focuses mainly on children who have autism who have what they call severe problem behaviors,” Christie said.

“It’s certainly horrible to see your child self-injure,” Christie said. “There is something uniquely devastating…about seeing you child self-injure and seeing that she doesn’t want to do it but she can’t help herself and she needs help.”

Eric said, “We’ve gone through the whole grief process with just the initial diagnosis and coming to terms with a child who is going to have an intellectual disability and she’ll be nonverbal, and we moved through that, and it was okay. But then the self-injury came a long and it was a whole new thing, almost a double whammy.” The self-injury came on gradually and it cycled in and out. “We would think this is horrible, but it seems to have cleared up.”

When Elie was 11 years old, she cycled into a very serious self-injury behavior cycle. “She needed somebody with her at her side during all 18 hours (a day) to prevent her from hurting herself too much,” said Christie. “We didn’t have a choice but to place her in a group home because otherwise she was at risk. So, in some ways that made it easier. This was a clear that was in her best interest.” It was a hard decision to have their 11 year-old daughter move out of their home but that it was what was best for her.

Elie’s impact on her brother and cousins

Christie and Eric have a son who is 5 years younger than Elie. “I’ve been very cautious from the beginning from not wanting him to feel like he’s responsible for taking care of her,” Christie said.

Eric and Christie attended classes to be aware of the psychological effects of having a sibling that has demanding needs. “He has been very impacted by it and we’ve done our best to let him have a normal life,” said Christie. “It’s difficult, but at the same time, he has great care and concern for people with disabilities in the community, and he has learned a lot.”

When Elie was younger extended family was able to be involved more in helping with her care. After she developed the self-injury behavior it became a lot more difficult for family members to help. “We’d get a lot of sympathy and a lot of help in other ways, but that didn’t turn into them being intimately involved in her life,” said Eric.

Christie added, ” I think anytime there are particularly challenging behaviors with the self-injury, it’s scary. It’s scary to see it, and you don’t feel equipped. It can be very scary and just too much. So, we don’t expect family to get in there and to take care of her.”

“She is delightful and loves to laugh and be active,” said Christie. “Elie is pure happiness.” Elie wants to be happy and getting her services in place allows her to be her happy self. “There is no purer joy that what Elie is happy,” said Christie. “That is just an amazing, healing blessing that you just don’t get from other experiences. There’s just something about it.”

“I would say, Elie is Elie. There is not artifice, no manipulation. When she is happy, it is 100%. If somebody is able to experience her and be on her level, it is amazingly rewarding and heart filling,” Eric said. Most of the care givers Elie has had over the years still keep in touch with her and want to see current pictures of her.

“It’s easily isolating, or easy to be isolated. You get so involved and wrapped up in their care and it just feels like nobody else can do this” Eric said. “Try to break out of that and realize that there are people who want to help. Let them.”

“Thankfully, with the internet you can find what you need with parents. It’s easy to let yourself be isolated because it’s just all consuming to take care of your child. but one step in front of the other, don’t take on too much at a time. Reach out to parents.” Christie said. She advises trying everything possible and reaching out to professionals.