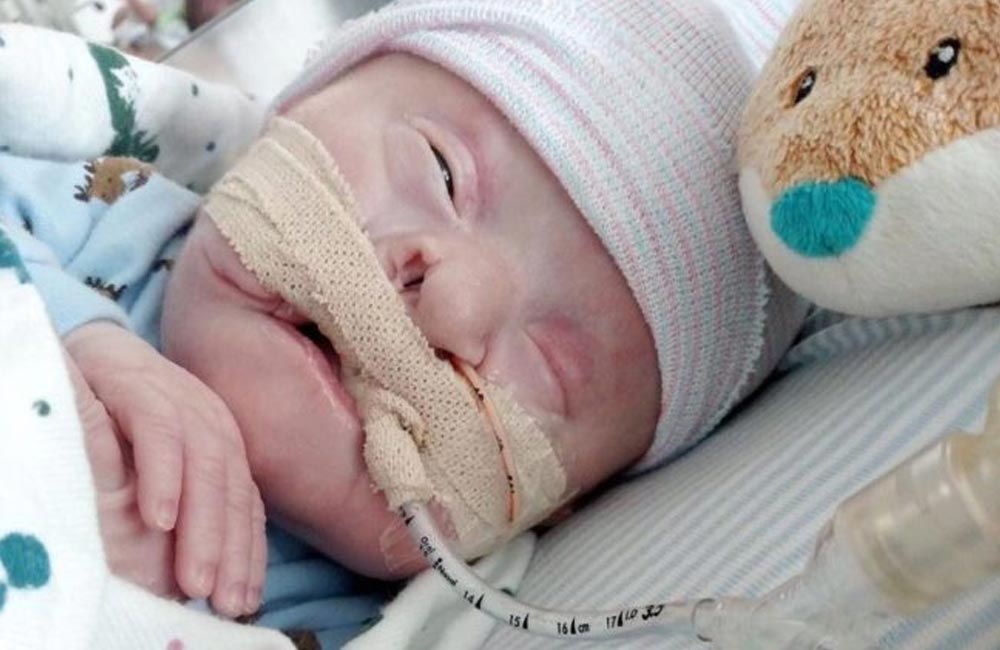 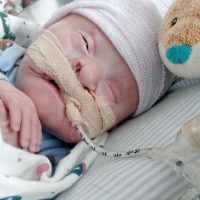 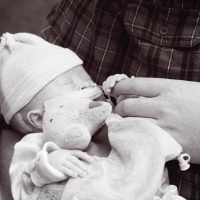 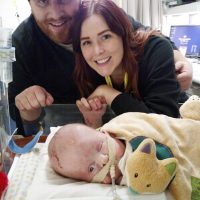 At their 20-week ultrasound Brittany and Tyler found out their son would be born with multiple medical issues including hydrocephalus, encephalocele and amniotic band syndrome.

Parents are excited about their 20-week ultrasound

Brittany and Tyler were looking forward to their 20-week ultrasound. They had an ultrasound at 16 weeks and found out they were having a boy, whom they named Max. “We were so excited. We struggled for years to conceive, and we had a miscarriage prior to Max, so we were just so excited to finally get to this point in a pregnancy,” said Brittany.

The doctor performed the ultrasound and went over their baby from head to toe pointing out things that were wrong. Their baby had a club foot, heart defects and several things wrong with his brain.

The doctor was able to tell their baby had either a meningocele or cephalocele. “They couldn’t quite tell based on his position, but basically there was a fluid-filled sac at the base of the cerebellum at the top of his spine,” said Brittany. “His head had ventriculomegaly, so the fluid in his head was twice the volume that it should be, and they explained to us they didn’t see any brain matter.” The doctor had also noticed what he thought was amniotic bands during the ultrasound, which could cut off circulation and damage different parts of their baby’s body.

A nurse had written down all of the things the doctor had talked about so they could take it home and start processing the information. The doctor also told them he would contact specialists to get as much information as possible.

Parents are scared to learn about their child’s diagnosis

Brittany and Tyler were worried if their baby would live and wondered if he would be born alive. “We were terrified and heart broken. We had wanted a baby for so long and after our miscarriage at 12 weeks with our first baby, we thought that if we can get past that mark, then we’re golden,” said Brittany. “So, we felt good after that three-month mark. We felt like everything was going to be fine.”

They didn’t expect anything to be wrong and the doctor had given them so much information that they found it hard to comprehend everything. “We were really scared, but we also remember when they left us in the room before they let us go… we both looked at each other and I remember Tyler distinctly saying to me, “I know we are both really scared, but don’t you feel really peaceful?” said Brittany. “I just remember feeling that we were going to be okay and that there was this sense of peace, and that we felt comforted in that moment, knowing that no matter what was going to happen, it was going to work out, and we were going to be okay.”

After the discovery of their baby’s medical issues there were weekly appointments for MRIs, meeting with neurologists and cardiologists. “Because we needed to find out if he was compatible with life, we went ahead and did an amniocentesis, and what they found was that he was, and there were not chromosome problems,” said Brittany. With that information they decided to deliver him at the University of Utah Hospital so he could be transported to Primary Children’s Hospital right after he was born.

“We decided…we would give it our best shot and go ahead and deliver there. He was born six weeks early,” said Brittany. “He was born via C-section to give him the best chance.”

The doctors stabilized Max and brought him to Brittany after a few hours. “That was amazing. It was everything we’d been waiting for, for two years,” said Brittany. “They brought him closer to me and opened the little door and let me reach in to touch him…then he squeezed his hand around my finger, and he was so amazing and I just couldn’t believe that he was here and that he was alive.”

One of the first things the doctors did was an MRI on Max. “Within a couple of days, they gave us the results of his MRI and showed us the pictures, and explained that hardly any brain matter had developed, that there was a little strip in the front,” said Brittany.

“They compared it to bacon, it was just a little strip of bacon,” said Tyler. The most concerning part was the lack of brain stem which controls breathing, swallowing and other basic human functions. The doctors explained that without a brain stem Max would never be able to do those things on his own.

“We knew going into it that we didn’t know how long we would have him or if we would ever bring him home…We were hopeful that we could have at least some time with him, so we went ahead and made some decisions to try to extend our time with him as best we could.

Neurosurgery was performed to relieve some of the fluid that was in Max’s head. “It was experimental. Basically, it’s a fluid line that they put in his head, and they have to balance the fluid,” said Tyler. The fluid drained to a beaker and could not flow too slow or too fast. “It’s a very interesting procedure. One of the perks of being at the U is that they could do those life-saving things.”

Relieving the pressure from the fluid allowed Max’s head to become a normal baby shape.

Parent’s are finally able to hold their son

After the fluid had drained from Max’s head and he had stabilized, Brittany and Tyler finally got to hold him. “They let us hold him, and that was amazing. I didn’t know if I would ever get to hold him, and to be able to do that was incredible,” said Brittany. “Just to be near him was the most amazing feeling in the world.”

Max had another surgery where the doctors put a shunt in his head to help him be more comfortable. “Right after they put in the shunt, he started to get an infection from the shunt site in his abdomen,” said Brittany. “It started to get really red and inflamed, and we got really worried. He got really sick for a couple of days.”

The doctors warned Tyler and Brittany that Max could get meningitis from the shunt which would result in his death. “But they gave him antibiotics, and within a couple of days, he was back to himself,” said Brittany. “He was happy and doing good again, and he was even starting to breathe over his machine.”

When Tyler and Brittany went to the hospital one morning, the doctors told them that they had done a blood draw on Max. It showed his body was full of infection and developing meningitis again, and they told them there was nothing they could do to help Max.

The doctors allowed them to make arrangements and decide when to disconnect Max from the machines. “We were allowed to do that, and that was when he was exactly 5 weeks old,” said Brittany.

Despite the hard times, there were so many good moments

Max was never able to leave the hospital, but Tyler and Brittany remember many good, happy moments. “We always tell people that despite all the hard things, there were so many good moments and good days, like when he would open his one eye at us,” said Brittany. “We’d say he’d be winking at us, or the first time he ever opened his tiny eye.” Max had one eye that was small because it was under developed and he usually kept it closed.

“The first time we ever saw that was when his daddy was holding him, the first day that Tyler held him, he opened both his eyes,” said Brittany.

“He’d always open both eyes when I’d hold him. It was neat,” said Tyler.

Brittany wondered if Max knew who they were and was concerned that he didn’t know they were his parents. She and Tyler were visiting one morning and when Max heard their voices he started kicking and squirming. “He had this huge smile on his face, and he was so happy to see us,” said Brittany. “That was such a special and important moment for me to know that he definitely knew who we were and that he missed us and identified us.”

There’s something special about a child with unique needs

“There’s something so special about being near a child with special needs. With us, for our faith and our faith in God, we just felt like we were in the presence of someone so mighty and so special with spirit. It was just like being in heaven to be near him,” said Brittany. “No amount of loss and heartache could ever take away that joy that he gave us and our gratitude for being able to have five weeks that we really never should have had.”

The neurologist had told them he wouldn’t be able to breathe on his own or even move and, yet, he was able to do both. “We just couldn’t believe it. It was remarkable, and there is nothing that could take that away,” said Brittany.

Advice to others in a similar situation

Brittany and Tyler tell others there is as much joy as there is heartache. They also relied on prayer. “Being able to rely on our Heavenly Father was the only way we felt like we could make it through,” said Brittany. “No matter what happens, don’t give up and don’t lose hope. Love the time that you have.”

She also advises others to not let the bad days get you down. “My baby wasn’t home, and someone else was taking care of my baby for me. I would get caught in that, and then there were days I would try to sit back and remember that he’s still here and I’m here, and that’s all we need.”

“There were a couple of days where we felt just numb, didn’t know what to think and didn’t know what to do,” said Tyler. “You’ll always look back on those positive experiences. He was defying what the doctors said, which made us laugh.” The doctors had told them that Max wouldn’t be able to recognize them, squeeze their hands or move around, but Max proved them wrong. “They had to put bumpers up so he wouldn’t roll out of the bed. Those little positive experiences helped us get out of that numb feeling,” said Tyler.

“Know that they are never going to stop being your child even after you’ve lost them, and that if you do lose them, you will be okay,” said Brittany.