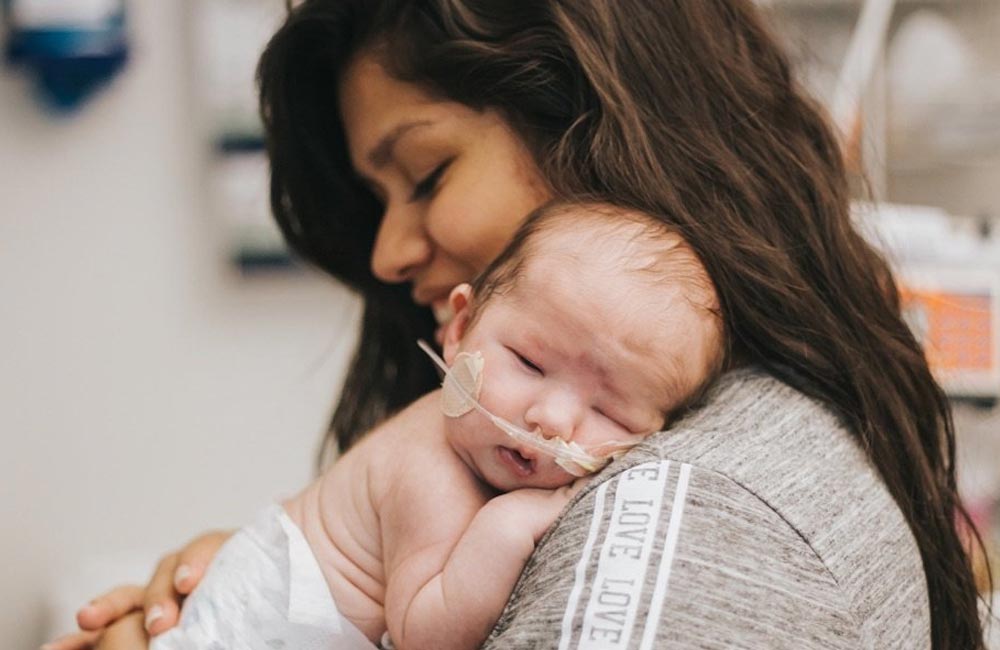 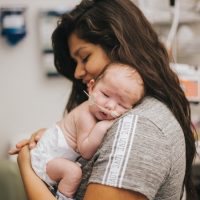 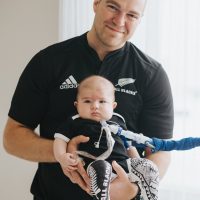 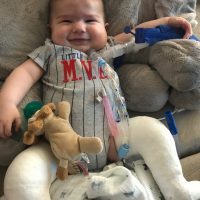 When Jessie was 24-weeks pregnant with Ammon, the doctor noticed he had clubbed feet and abnormalities with his heart. After an amniocentesis, Ammon was diagnosed with DiGeorge syndrome.  At seven-months-old, he is bringing joy into the lives of Jessie, Nathan and many others who meet him.

Joy and Happiness Despite the Struggles

When Jessie and Nathan went to their ultrasound appointment, the doctor noticed some abnormalities.  Jessie recalled, “It was at our 24-week ultrasound when our doctor noticed his clubbed feet. He also noticed that his heart isn’t functioning properly, so he referred us to another doctor.”

A few weeks later they at their appointment they were told that Ammon had tetralogy of Fallot with the absent pulmonary valve.

Tetralogy of Fallot with absent of pulmonary valve

Tetralogy of Fallot is a birth defect that affects normal blood flow through the heart to the rest of the body.  It is a fairly common birth defect affecting six in a thousand. Ammon however, had the absent pulmonary valve; making him six in a million.

An absent pulmonary valve with tetralogy of Fallot puts an increased pressure on the pulmonary arteries and results in severe pulmonary regurgitation.  Basically this means that blood is very limited in reaching the lungs. This results in blood that is not oxygenated, affecting the rest of the body.

Doubling the amount of amniotic fluid in a few weeks

A few weeks after the first diagnosis, Jessie said, “I was at an appointment for our maternal fetal medicine doctor, she noticed that I had a lot of extra amniotic fluid; my body had actually doubled the amount of amniotic fluid in a couple of weeks.  She said that generally that’s a sign that something is wrong genetically..we decided to do an amniocentesis.”

Knowing some of the different genetic abnormalities that could occur, Jessie said, “We waited a week for those results, and we were really grateful that he had DiGeorge and XYY things and that although he had many unknowns, he was still going to he here.”

Jessie had previous experience working with babies in a special care nursery.  She said, “When we entered this whole having-a-child experience..we anticipated that it was going to be a breeze.  I felt like babies were only as hard as you make them.”

She soon realized that there were some things beyond her control that make life with a child with  a disability more challenging. She said, “For me, the hardest part is not being able to pick him up and walk around.  I have to worry about a ventilator, I have to worry about tube feeds and the humidifier and the millions of cords that are strapped on to him..the hardest part is just letting go of how it should be, going with the flow and accepting our journey the way it is.”

The joys that come with having Ammon

Nathan shared what joys they have experienced since having Ammon.  He said, “Surprisingly, he is a very happy boy. He is already a heartbreaker, and he’s already teasing the ladies..it’s interesting to see him grow.  He only knows that he’s a happy baby, and he doesn’t see himself any differently from any baby at that age.”

Having several friends whose babies didn’t make it, Jessie said, “I guess that’s our joy, that no matter how hard it is, we are really grateful to have him.  He has taught us a lot. Even with the hardest things of not being able to walk around with him, he brings so much joy that it makes those things insignificant.”

Jessie shared invaluable advice to other parents facing a diagnosis.  She said, “It’s going to be okay. It’s okay to have hard days..you can’t have the food days with our having the bad; you can’t even recognize the good days without having those bad days,  It’s okay to grieve and to know that your life is going to be different, and that’s okay.”

Nathan added, “There’s no struggle that isn’t worth it basically, and the joys and happiness will definitely be there no matter how hard the struggle is.”