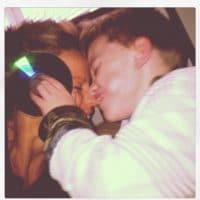 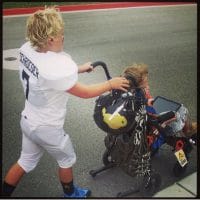 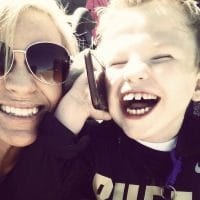 Jessica is a single mom of two boys, Britton and Chewy. Britton was born at 28 weeks gestation weighing only two pounds and 14 ounces. He is 13 years old now and has had many health challenges, including a stroke and brain bleed which resulted in Traumatic Brain Injury (TBI).

When Britton was born he was in the NICU for 3 weeks, he had some minor complications but overall seemed to be doing well. Jessica was able to take him home, where things took a turn for the worse. Britton’s bowel ruptured causing three main arteries to cut off blood supply from his brain resulting in a brain injury. Jessica didn’t know if he was going to live or die.

He was in the NICU for eight months during which time he had a stroke and another brain bleed. Jessica said “It was traumatic to have him early…. I was clueless and young.”

After an emergency bowel surgery, the doctors wanted to try an investigation medication on him. Jessica recalls them saying “this experimental drug, it’s never been used on kids, but we are going to see if this will work in two days you’ll know if he is dead or not”.

They told Jessica to say goodbye to him, they had little hope he would survive.  Two days later he was still alive, but continued to have many seizures. And even though he still has seizures to this day he has improved a lot.

One night Jessica went to check on Britton, she found him completely blue in his porta-crib.  “I stood outside of this room where we couldn’t go in because they are working on him and he is this lifeless kid laying there and all of his insides started to come out and I thought, okay this is it, he’s dying”

“He had a seizure for about eight hours. They had to life-flight him, I thought he was going to die then. We were in the intensive care unit and I’m just watching my child seize and they are not doing anything..I think they just didn’t know what to do”

“He Brings so Much Light”

“You know as hard as everything was I wouldn’t trade it. I wouldn’t be the person I am without him. His light, his smile, he is non-verbal and he just creates such love…He doesn’t care how you look he just wants to love, he has helped me be a better person. I always tell people,“you need to have a Britton experience” especially when they are struggling, because he just brings sunshine”.

Chewy is Britton’s younger brother who agrees with his mother saying “Once they really start to meet him they really love him because like my mom said, he brings so much light and he just warms everybody’s spirit”

How to Help a Caregiver

Britton needs total care. He is legally blind and almost completely deaf, and he needs help with feeding and dressing. Her advice to parents, “I think as humans we want to be strong and prove that we can do whatever on our own. With a kid like him you can’t.”

At first Jessica was scared to reach out to people. “Now if people ask if they can help, I’m like sure, please come in. I need help making his meds or washing his clothes or cleaning up.” Jessica also spoke about the importance of building a network of people that you can call for help.

Using RISE, a non-profit for individuals with disabilities, has made a huge difference for Jessica. She said, “I used to hate summers because I’m single and I have to work, and I have to try to figure out how to take care of these kids.”

After receiving funding from RISE Britton was able to participate in a summer program. Jessica stated “it has changed our world. I’m so grateful.”